6 new possible Ebola patients in Spain on route to hospital 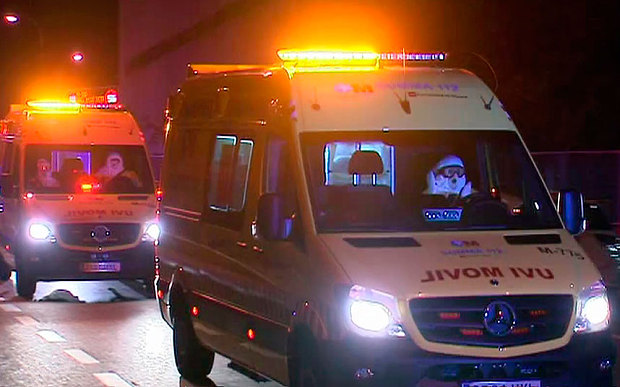 I dont know if Spain is being proactive by moving all there people in contact with the nurse or there showing signs but either way its good to see them so serious about the situation.
Apparently 2 priest that were in the last stages and dieing from Ebola were brought home to Spain. The nurse treated them was infected possible when she was removing here protectivve suite she touched her eye. It seems there are 6 other people that may have been part of the team treating the 2 priest. The priest died shortly after arrival it was said they were almost dead then they arrived and questions are being asked why they were even moved while at deaths door in the first place.

Im not seeing this level of proactive containment in Dallas, why?

Seems spain is on top of there out break even putting the original patients dog to sleep.

MADRID -- Three more people were placed under quarantine for Ebola at a Madrid hospital where a Spanish nursing assistant became infected, authorities said Tuesday. More than 50 other possible contacts were being monitored.

The nursing assistant, who had cared for a Spanish priest who died of Ebola, was the first case of Ebola being transmitted outside of West Africa, where a months-long outbreak has killed at least 3,500 people and infected at least twice as many. The woman was initially reported to be a nurse.

Her case highlighted the dangers that health care workers face caring for Ebola patients - officials said she had changed a diaper for the priest and collected material from his room after he died. Dead Ebola victims are highly infectious and in West Africa their bodies are collected by workers in hazmat outfits.

posted on Oct, 8 2014 @ 11:14 PM
link
This is not good news for Spain.. And it appears their Government was warned by it's own health care people. This situation may be one in which "Jumping to conclusions" is the best bet to avoid spread of the sickness.. A political decision to wait and see will not work here.

posted on Oct, 9 2014 @ 12:15 AM
link
Europe got through the plague, this is nothing. Quit bugging out. This US Patent strain of Ebola is just putting a few countries in their place on the world stage and threatening their economy.


The health of a Spanish nurse who is the first person known to have caught Ebola outside of Africa has worsened, the Madrid hospital where she is being treated said Thursday.

"Her clinical situation has deteriorated but I can't provide more information," because of the express wishes of the infected nurse, a spokeswoman for the La Paz-Carlos III hospital told reporters.