Raptor sees the Warthog out

posted on Oct, 3 2014 @ 01:00 AM
link
It appears the A-10 will have its last ever combat action over Iraq fighting ISIL. The 122nd FW [Indiana] has just been deployed to CENTCOM for an extended term to undoubtably deliver some much needed depleted uranium to the aggressors there. As I am sure is agreeable with many of you, the Warthog was [and is] one of my favorite platforms in the arsenal. And yes it's because of the gun. But I'm not that dumb, there are many things that this airframe provides that nothing else can - especially in a counter insurgency environment.

The executive branch have decided that the Army will play no part in this conflict and that leaves the USAF with one choice. The A-10.

I would love to think this will affect the decision to decommission this airframe but I know it wont. However I would really like to know about what you think in regards to this last hurray of the Warthog.

Will it change anyone's minds? Is this a capability we should hold on to? Is the limited range of the aircraft its eventual downfall?

This is my first thread,
Aholic 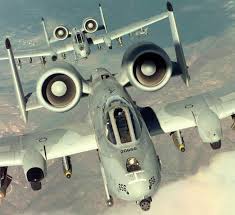 They were tank busters in the first gulf war. Sad to see them go cheaper and easier to handle compared to the raptor.

Maybe I can get one at auction? lol. Seems like a waste either way. Love the front mounted trench digger.

I agree and hoping by morning we get more replies.

But why the A-10? Isn't an aging, maintenance heavy, slug? Couldn't a couple hundred Reapers do the trick?

::playing devils advocate:: really would like to hear everyone's discourse.

Does this have something to do with it??

What surprises me about the potential decommissioning of the A-10, is that as far as I was aware, it was only relatively recently retrofitted with a plethora of fire control improvements, handling alterations, new targeting gear, and a whole host of other improvements and tweaks. To decommission the aircraft so soon surely means that the money spent on that package of upgrades will be essentially wasted, since the improvements made were supposed to increase the viability of the aircraft going forward, and allow it to continue in a service role for a significant period (thus justifying the expenditure).

Never mind the fact that the F-35 has not had enough deployments to make a value judgement about its ability to cover the bases which the A-10 currently covers, but it has not even been proven totally reliable yet! Perhaps when the F-35 has been used in combat for a decade or so, that would be a time to assess its capacity to fill the role currently occupied by the A-10, as well as the other roles it is supposed to fill, but until then, it seems bizarre to place such an effective aircraft as the Warthog, on the scrap heap.

From what I understand, the things are essentially flying tanks, and for all that their mission roles are somewhat limited, you do not lambast a sniper rifle for being incapable of rapid fire, or for its limited magazine size, and by the same token, you do not poo poo the Warthog, just because it has a very specific role. Like a sniper rifle, the role for which it is intended, is one which it performs admirably, and until it stops being capable of fulfilling that role, the powers which govern what gets used where, ought to keep them handy.

The idea that the US government is going to shelve the Warthog because it cannot afford to keep both the Warthog, and some of the newer airframes in play at once, is nothing short of a total lie. It can afford to do whatever it wants, because it is in that much debt that nothing it does financially will either a) make a dent in the deficit worth making, or b) make the situation any worse than it already is. They know this.

I would wager that the reason they want to remove the Warthog, has more to do with justifying the ridiculous cost of the F-35, although they have no idea whether it can be relied upon to the same degree as is the Warthog.

Personally speaking, I find the A-10 to be a pretty awesome machine. There are very few things which LOOK as deadly as they are in aircraft terms, but the Warthog looks like it is there to throw hot lead in the face of the enemy, and scatter them all over the place in rapidly expanding spheres of vapourised blood and bone. It is a spine wrecking, face smashing, radical badass, and I think they should fly them all till they literally fall out of the sky from metal fatigue.
edit on 3-10-2014 by TrueBrit because: added detail for clarification.

The F-35 and the Warthog are not comparable. The F-35 is a bomber and the Warthog is a ground support tank killer, more comparable to the F-22. I highly doubt the cost of the F-35 has anything to do with the A-10.

Its a multi-role fighter aircraft, according to its designers and manufacturers.

It can be a bomber, but that requires no alteration to the basic format of the airframe as far as I know, hence the term, multi-role.

The F-22 cannot compare to the abilities as a close support aircraft, and the F-35 was never meant to.


One of the coolest things I've ever seen was those good ol' Warthogs flying overhead. Granted my experience with them was only in joint exercises in Korea back in the late 80's. But one thing you knew when they flew overhead ...you were safe and you didn't want to be on the other side of those guns.

The F-35 cannot be just a bomber, if its manufacturers call it a multi-role FIGHTER aircraft. Also, its hovering capabilities make it capable of slower movement, something the Warthogs rely on to be able to engage their chosen targets effectively. Also, all pages relevant to its capabilities confirm that it is capable and in fact designed to be capable of ground attack, where as the Raptors abilities in this regard were rather secondary to its initial design parameters.

The F-35 was specifically designed to have a ground attack roll. More so than the F-22 was. It is not a bomber by definition, hence the "F" designation in F-35. It is slated to take over the CAS roll using SDB's and a range of fire and forget missiles. The F-35 is a F-16, F-18 and A-10 replacement, non of those airframes are considered bombers.
Will it be as effective as the A-10 in the CAS roll? No it won't but that unfortunately is the future and the DoD sees many upcoming conflicts in contested airspace with more widely dispersed SAM systems that the A-10 will have trouble surviving against.

No way will they ever send an F-35 down to where the A-10 operates - the F-35 is far too vulnerable to MANPADS and direct-fire weapons.

The A-10 is particularly useful in conflicts like this due to its huge weapons load-out, (GAU-8, LGB, rockets, Mavericks, CBU's), its survivability, it's long loiter times, and its ability to do its own target spotting - an F-35 or F-16 or F-15E or whatever is going to stand-off at high-altitude and need a FAC to locate and possibly designate targets.

An A-10 not only can do its own target spotting, it can act as a FAC, calling in other assets, like JDAM strikes from other a/c, like a B1 with JDAM's, F-16's, etc. If we won't put "boots on the ground" to do forward observation and target designation, we absolutely need a FAC. And for detecting and destroying a fleeting target of opportunity, like a road convoy or what have you, the A-10 is the perfect tool in the toolbox.

The Air Force has been trying to get rid of the A-10 forever, but it's usefulness in this CAS role makes it hard to get rid of.

Hmm, here's a link to a video where someone talks about the original design specifications: www.military.com...

Just the fear it instills to the enemy is something that will never be matched.

posted on Oct, 3 2014 @ 11:11 AM
link
Just a thought about this. I agree the A-10 is a far superior weapon of choice for close in support. F35 is a fighter/ bomber, that has not proven itself worthy yet. But replacing the Warthog, I believe the command will use drones. They do not want to loose anymore pilots than necessary. The Potus does not want to get involved with going to war. So the least hurtful thing he can do is go with the drones as support. I know they are not designed as close in support, but Potus does not want to fight, and WIN.

No, just no. That's like comparing a 2 1/2 truck to a `14 ZR1 Corvette. A very maneuverable and dangerous truck

As much as some brass want the A-10 replaced its more likely it will be supplemented first, the GAU-8 avenger cannon brings a unique capability to the battlefield. Until a system is brought into the grey that brings this capability or better to the field the Hog isn't going anywhere.

posted on Oct, 3 2014 @ 12:02 PM
link
I sometime think the British Typhoon with its sixty pound rockets that was used in Normandy in 1944 would have been an ideal platform, cheap to use would be an understatement! The Brits used to be known for fighting the next war with the last wars weapons!