posted on Oct, 2 2014 @ 04:03 PM
link
In 1903, the small town of Van Meter, Iowa played host to a strange creature. Actually, several witnesses claimed there was more than one creature, and a couple people reported seeing what appeared to be a smaller, possibly younger creature. It was believed these creatures were living deep in a large coal mine near the town. Assuming the creature was evil, townsfolk shot it repeatedly with rifles and shotguns. Apparently, it was impervious to bullets and buckshot!

A sketch of the creature, based on witness descriptions: 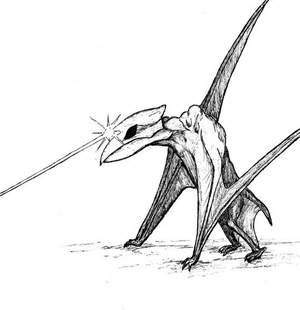 Over a series of nights in the fall of 1903, several respected and prominent men of Van Meter reported a half human, half animal with enormous, smooth bat wings flying about. It let off a powerful stench and scared the daylights out of them because it moved at speeds never seen before. And it shot a blinding light from its horned head.

posted on Oct, 2 2014 @ 04:07 PM
link
This is one I've never heard of! The blinding light is interesting. Perhaps it reflected sunlight or torches? I'm gathering it was added by witnesses. S + F, I have to add this to my list of curious cryptids.

posted on Oct, 2 2014 @ 04:32 PM
link
Woooo. It's a great legend. Nice and scary, the stuff for campfires and sleepover parties. Too bad it was never seen again or that the ones who descended into the shaft didn't write about the takeout, huh?

There are some other drawings and old paper clippings at this link.

posted on Oct, 2 2014 @ 04:46 PM
link
This story is fascinating, I have actually done alot of research into this .
From what i can recall it was seen on top of buildings during the nighttime, and the townspeople thought it was burglers
carrying lamps untill the intense light shone onto some of them.

I believe that the townsfolk formed a millitia type group to hunt this thing and im pretty sure there were some people that actually fired on the creature to no effect.
If i remember correctly the townspeople stood behind the owner of the bank and it was because of the bank owners prominent standing in the community that the story gained alot of traction .
As a matter of fact i am pretty sure the bank owner himself is one of the people that opened fire on the creature.


There are some interesting facts regarding the mine itself as well .

Th e Van Meter Visitor: A True and Mysterious Encounter with the Unknown

From the OP link,


the town's doctor, a banker (who shot at the creature through the bank window), and a couple of businessmen, one being the owner of a local hardware store.

I suggest these people got together to drum up an idea to attract tourists.
It was the done thing back then to concoct a ruse to attract visitors, so more than likely this was one of them

Also it would be neat if the bat monster was still there. Imagine going down thr mine shaft and seeing bones of it and unfortunate towns people at the bottom


I suggest these people got together to drum up an idea to attract tourists.
It was the done thing back then to concoct a ruse to attract visitors, so more than likely this was one of them

I would have thought that folks back then were pretty straight forward, from the accounts i have read into the men back then were very much "mans man" and not very prone to making things up. Besides if you were going to make something up in order to profit off of it wouldnt it be better to concoct something abit more mainstream then to make up a flying invulnerable beast?

Alot of those people were very prominent and respected members of their community as well, back then people of that stature carried themselves pridefully with such respect .

posted on Oct, 2 2014 @ 09:11 PM
link
a reply to: ColeYounger
Ah! But those were in the days of "yellow journalism" when every town had a little newspaper or two and the telegraph sped stories across the land, true or not. Most newspapers were sold by scuffy young boys from street corners hawking the headlines of the latest edition, one corner with one newspaper for a nickel and across the street would be another newsboy for a competitor.

America's famous Samuel Clements, better known as "Mark Twain," got his start in writing tall stories with a newspaper in Colorado. the topic was about the amazing abilities of a jumping frog. Many of the UFO "airship" stories from the late 1880s were fabrications and enhanced fake stories that would start in one place and delivered by telegraph to another place. Anyone touting such old stories these days is doing s disservice to their readers if they do not fully develop and explain the power and use of yellow journalism in the several decades on both side of 1900 as that type of writing was effectively used in politics also to start wars of the period.

(I'm not slamming recent writers because I know nothing of their work, but I know of the period of which we discuss.)

Yeah the guy seems to be very well read on these sorts of things .
Nice AV btw.

Lewis says he has found no evidence to suggest the monster was a hoax, although be believes the facts of the story may have been embellished over the years.

That link has alot of info about the case as well as some dialogue from Chad Lewis himself.
There is a copy of one of the original press releases too .

I remember the bank owner from reading about it, and he fired 6 shots or 5 from his 6-shooter and knew he hit it, but claimed it let out a smell that made the banker black out, and when he woke later he couldn't remember much.

They thought it had retreated into the old mine during the day so they dynamited the mine shut, and now in modern times it has also been seen.

I actually was going to point out that they blew the mine shut but i wasnt sure if it was the right case, your right .

And i forgot about the odour side of the story untill you brang it up , thank you .

I also recall there being certain similarities between the Van Meter creature, The Chaupacabra and The Mothman .
For example witnesses described this creature seeming to hop like a kangaroo and over massive distances (like the chupacabra ) also the Van Meter creature was meant to be incredibly agille (like the mothman) i found the visual aspects of all three to be quite interesting but also the secretion of the smell is fascinating too .

There are more then a few criptods that have similar or relatable elements to them .

Im glad people find this story so interesting as i do

posted on Oct, 3 2014 @ 01:22 AM
link
Thanks for sharing. Can't say I am familiar with this one. It does look like a pterodactyl but with a laser beam(or as mentioned "blinding light").

posted on Oct, 3 2014 @ 05:35 AM
link
Well i know an E.T that is mistaken for cryptid often because of the shape-shifting abilities. My only explanation for the *Light* And when ever they shape-shift into an animal it's always imperfect. As in they appear like an unknown species, hybrids or extinct animals with supernatural agility and immunity to firearms.

It's actually more amazing than it sounds. This is an interesting account. Because supernatural agility is and immunity to weapons is a hallmark of these entities. Maybe they were mining something from the mine, and after the entrance was sealed, lost interest in that specific area.

The reason such entities are impervious to firearms is because they are not flesh and blood. They are made of soul infused particles, Think of programing nano particles. But these particles are condensed so they have a neutralizing effect on matter. Since matter follows the laws of magnetic force and oscillation, any resistant particles taking on a unified consciousness. Through methods of containing consciousness within these particles as well as the *information* needed to operate them. You get something that sort of transcends space and time. By breaking down the tension of surface area which causes drag. Such entities can rapidly accelerate, teleport, preform impossible feats of agility. As well as complete immunity to *The Elements* as elements follow the guidelines of delicate balances of harmonizing specific frequencies that are generated by the subatomic particles oscillations.

I understand some of what i'm saying will upset some people as this is a crypto forum. But these specific entities that are mentioned arn't exactly *Animals* in the traditional sense. A lot of paranormal events follow during and prior to seeing these creatures. If i were to believe this was a real flesh and blood creature my only explanation for it would be is it's a descendant of some experimental genetically synthesized species left over one of the falls of modern society in the passed that survived the many catastrophes up till now. Would be my only explanation in such a case.

posted on Oct, 3 2014 @ 06:04 AM
link
S+f,interesting-that sketch in the OP made me smile.When you're next on YT search:the oatmeal sarah donner pterodactyl,you'll see what it reminded me of:-) think it may be against t+c to post the link directly.a reply to: ColeYounger

posted on Nov, 21 2014 @ 11:44 PM
link
Its been only a few days, since i watched the show "Monsters and Mysteries in America" , from where i came to know about this magnificent beast of Van Meter that had this shiny light source on its head .
Said it came from the opening of an underground tunnel , but how can a creature survive underground one might ask !! Creature of inner hollow earth ?? ... Creature of Hell ?? ... or could it be , that it came from another dimension just how the Bigfoots and Mothmen come and go !! ... We will never know !!