posted on Oct, 2 2014 @ 03:13 AM
link
As you can see from the linked content, John Tory and the government of Stephen Harper are like minded when it comes to financial planning. In a word, unrealistic.

They rush to make commitments of taxpayer money for projects that are very costly but ultimately guaranteed by you the taxpayer, in the event of cost overruns, as there certainly will be with the Department of Defense plan to acquire the F-35 fighter jet, or revenue shortfalls, as there certainly will be with John Tory's plan to finance "Smart Track" by means of the increases in property tax revenue that might come from private development in the wake of transit expansion.

If that (the mad dash through the mall by politicians clutching YOUR CREDIT CARD) weren't bad enough, the reason that such a flimsy plan as TIF or Tax Increment Financing is even a part of John Tory's campaign platform goes back, actually, to the gargantuan boondoggle that the F-35 has become.

In August 2013, the Department of National Defence (DND) released the “Next Generation Fighter Capability Annual Update” (“DND Update”).2 The DND Update anticipates a total project cost of $45.69 billion for a fleet of 65 F-35s, including an operating cost of $19.857 billion. The DND Update does not provide any information on the cost of aircraft other than the F-35.

Toronto can't afford infrastructure because the tax money that should be headed, through the federal government, to things like transit expansion in Toronto, is going to Lockheed Martin instead.

Toronto's candidates for Mayor should be pressing the federal government to address this issue. All municipalities in this country should be doing the same, instead of sitting around trying to dream up new ways to tax Canadians in order to pay for infrastructure we've already paid for.

posted on Oct, 2 2014 @ 06:16 AM
link
So what do you suggest? Do you really think voting for the other guys is going to get much else done? I'm thinking of just withholding my income tax now. Because, essentially I don't want to fund a boondoggle like the F35, or a backasswards plan for funding city transit or giving guns and ammo for middle eastern "moderates", while we have to obey gun laws.

Like I have said before. This system is fundamentally broken and backwards. Why should we keep acknowledging it? The wheels will keep on spinning us into despotism if we keep using the system that keeps us in that direction. Time has come to change. Stop giving these morons a soap box to stand on.

Tush, tush. No. I'm afraid we have to remonstrate.

I'm shocked at your lack of faith in Canadians. For every Don Cherry style defender of something nebulous there are ten soggy tea bags like myself who believe the government should live within the means of the taxpayer and not run up a big credit card bill even if Lockheed demands it.

We here in Canada must sit up and make our views known and even vote if necessary. We shall make them move out of their offices to ones with poorer views. We shall increase the tempo of musical chairs. We shall never surrender until bed time. We shall sleep to fight another day, gosh darn it.

Thought this might interest you, Ipsedixit, if you have not already seen it, that is.

I read your linked article and was aware of some of it already because I had looked at a couple of the Munk School studies.

It is important to look at the following diagram carefully. Our city is responsible for generating almost 20% of Canada's economic output and yet only receives 2% of its operating budget in federal grants. That's 192 million dollars out of a city budget of 9.6 billion dollars.

That is just completely outrageously unacceptable. 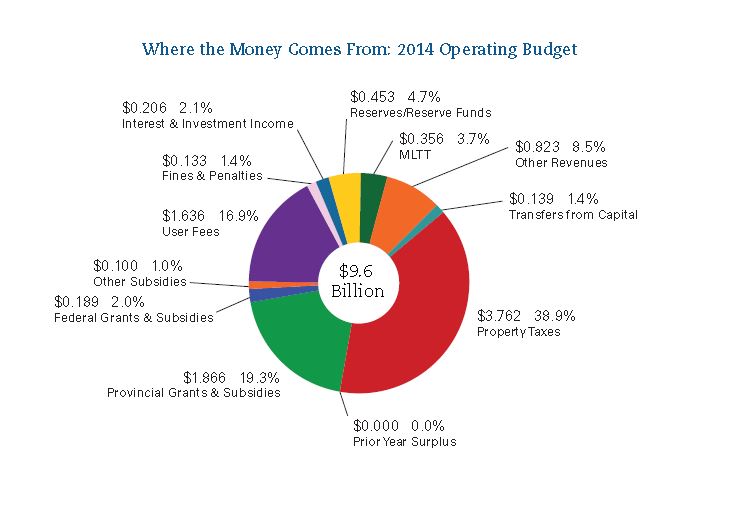 If the jihadis blow up Union Station, something I think is highly unlikely, having F-35s flying air cover over the city will be of small comfort.

Thanks for the link to the song. It was very inspiring. They should do a double album and mail it out to all of Olivia's supporters. At least that way they will all go down singing.

originally posted by: ipsedixit
a reply to: aboutface

I read your linked article and was aware of some of it already because I had looked at a couple of the Munk School studies.

It is important to look at the following diagram carefully. Our city is responsible for generating almost 20% of Canada's economic output and yet only receives 2% of its operating budget in federal grants. That's 192 million dollars out of a city budget of 9.6 billion dollars.

That is just completely outrageously unacceptable.

If the jihadis blow up Union Station, something I think is highly unlikely, having F-35s flying air cover over the city will be of small comfort.

I assume you're aware that the F35 program has been, at the very least, put on the back burner in Canada? Who knows, maybe they read your thread?

Thanks for the info. I wasn't up to date on that. 45 billion dollars were spent by us on development costs associated with that aircraft. Some of that money may have been well spent in terms of giving value to Canadian subcontractors, but I am sure a lot of it was lost.

45 billion dollars would have paid for a lot of infrastructure in this country.

posted on Oct, 14 2014 @ 12:06 PM
link
a reply to: ipsedixit
Obviously my last post is incorrect. Apologies to all. I wrote it in haste with my mind on other things.

I'm not sure what the Globe article really means in practical terms, since Canadian companies are still working on the F-35 program, according to the wikipedia history of Canada's procurement of the fighter.

To demonstrate that they are restarting the procurement process from scratch, Canadian officials will collect information from other plane manufacturers, including U.S.-based Boeing, maker of the Super-Hornet, and the consortium behind the Eurofighter Typhoon. They may also contact Sweden’s Saab, manufacturer of the Gripen, and France’s Dassault, maker of the Rafale.

The ballooning lifetime cost of the F-35 fighter and Ottawa’s decision to shop around for alternatives are creating panic among Canadian companies betting on supply contracts for the Lockheed Martin plane, sources have said.

The government aims to complete this reappraisal of what the fighter aircraft market can offer Canada as expeditiously as possible in 2013.

Government officials said Wednesday that Ottawa has not decided whether to call for competitive bids to supply a plane and will await the results of the options analysis.

Canada has signed no contract to buy F-35s, and while it has signalled to Lockheed Martin, the manufacturer, that it wants 65, it has no obligation to buy them.

It did sign a memorandum of understanding in 2006 that set the terms by which a country would buy the aircraft and also enabled domestic companies to compete for supply contracts for the plane.

Signaling and stating are confusing gestures behind which participation in the project still appears to be going on, as far as I can tell.

There is a good article examining the F-35 issue from different aspects, including the political one, at the following link.

Fair enough. Politics as we all know isn't ever cut and dry.

And yes, $45 billion can always be put to better use. I'd much rather us not procure a new fighter and instead dump it all into better infrastructure... Or give it to countries that need it. Say, oh...I dunno the countries effected by Ebola? But no, instead we dump money into bombs and guns and ammo so oil can be sucked up and spit out.

Why do I have the feeling that the world is run by morons?

They used to say "All roads lead to Rome.", but in Canadian politics all roads lead, if you follow them far enough, to Washington.

I wonder if the hi-fi listening devices that Vic Toews had installed in the nation's airport lounges were bought in the US. Yes or no, the fact that they were bought at all is reflective of American attitudes (fascistic, because purchases from corporations have to be made, paranoia) to security.

Do you have a breaking point with all this BS? Do you really believe democracy truly exists and functions well?

I don't..as I have stated before.

I'm not sure what my breaking point is. Perhaps the first 50 people infected by Ebola in Canada. It will happen. Though i hope it doesnt. And likely it will happen in Toronto, Montreal or Vancouver, if it does. God help us if its the maritimes that gets hit first. Talk about a decrepit health care system.