Golden State residents can now petition a judge to temporarily remove a close relative’s firearms if they fear their family member will commit gun violence, thanks to a new safety measure signed into California state law Tuesday by Democratic governor Jerry Brown.

Under the “Gun Violence Restraining Order” law, a successful petition would allow a judge to remove the close relative’s guns for at least 21 days, with the option to extend that period to a year, pending an additional hearing. The law is the first of its kind in the U.S., and will be an extension of existing legislation that temporarily prohibits people with domestic violence restraining orders from owning firearms.

That is good for the family members if they suspect a family member that may unstable, to remove the gun temporarily until further evaluation


However, the part I do not like and am suspicious of due to LEO abusing their powers at times is this little tid bit:

Under the so-called gun violence restraining order in the court system, immediate family members and law enforcement agencies could ask a judge to order guns temporarily removed from certain individuals.

The legislation - the first such measure in the United States - was introduced after police near Santa Barbara said they were unable to confiscate weapons from a man who later went on a rampage and killed six people, despite concern from his family he was in poor mental health and might become violent.


This is good as long as it doesn't get abused by family members with a grudge or give the police an excuse to confiscate guns
It's a slippery slope IMO but hopefully, good intentions will prevail

posted on Sep, 30 2014 @ 08:44 PM
link
As a supporter of gun rights I see this law as having the best of intentions. I also see it being abused just as much (if not more) as every other law on the books.

I know this isn't a funny topic, but the irony here is a good one

posted on Sep, 30 2014 @ 08:53 PM
link
a reply to: snarky412
These gun grabbers can find more loopholes, back doors, and angles... There is no good intention here, but it's worded so that anyone against it must be a psycho, and probably needs their guns taken from them.

posted on Sep, 30 2014 @ 08:57 PM
link
And how many people will turn in safe, responsible gun owners? I bet the judges will allow it for nearly anything. As for criminals, they'll still have access to guns and I doubt their family members will speak out.

Soon I can imagine California will pass a law allowing teachers and school officials to report "unsafe gun possession". What a nightmare.

originally posted by: Klassified
a reply to: snarky412
These gun grabbers can find more loopholes, back doors, and angles... There is no good intention here, but it's worded so that anyone against it must be a psycho, and probably needs their guns taken from them.


That was my take on it as well

Being as gun control seems to be a touchy subject for some, I'm trying not to offend any that may take this legislation seriously

Besides, once someone is checked as 'unstable', you know damn well they'll revoke their gun license if they can
That is what I feel it will come down to in the long run

As for criminals, they'll still have access to guns and I doubt their family members will speak out.

Since criminals don't abide by any laws, they will always have access to guns

They just go down to the local hangout and swap cash for that surprise in the little brown sack and viola, a gun with the serial numbers scratched off, probably stolen from a legit gun owner

Get caught doing a crime, no problem -- just drop the gun in the trash or gutter and get you another stolen gun off the streets from their homie

posted on Sep, 30 2014 @ 09:08 PM
link
i like how the entire article is written from the perspective of the law being about family members taking their relative guns when it says right in the same article that law enforcement can also do it.

originally posted by: kicked
i like how the entire article is written from the perspective of the law being about family members taking their relative guns when it says right in the same article that law enforcement can also do it.


Not to mention playing on emotions as well...

"If it can save one life, one family from that agony, it will be worth it," Democratic state Senator Hannah-Beth Jackson, said during debate on the measure."

Anyone can already have them removed for good cause. A standing law doesnt matter when the owner 's screaming "There's nothing WRONG with me! Leave my guns ALONE!"

Same situation...law or not. Ive had to take guns away from family members myself. (Gave them back after the event though). The Police will always stand there to assist you effectively removing them.

The same Jerry Brown who was so chummy with Jim Jones? I can't say a man that can be taken for a fool so easily should be allowed to sign any bills. 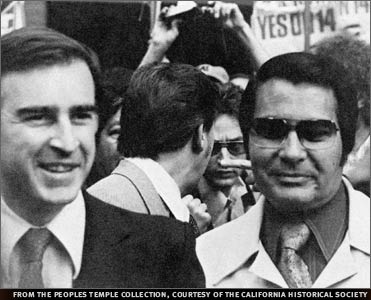 posted on Sep, 30 2014 @ 10:31 PM
link
If anyone comes to my home to remove my firearms the family member will be right. I am at the point where I value my freedom more than my life.

The road to hell is paved with good intentions...or so someone said at some time or other.

Look, I'm all for something like this, because the reality is that the mind can go nuts in the blink of an eye, or suicidal depression can hit quite quickly, or a domestic violence situation can come out of nowhere.

BUT...and this is a huge one...the way the law is described in that story leaves it open to way too many abuse loopholes. I would hope that the burden of proof in order for the judge to sign off on it would be quite high--and we all know activists judges exist, so who is to say there wouldn't be an anti-gun judge known for signing off on this stuff abused by LEOs?

It's just too loose to me to be a good thing.

That doesn't mean the removal at that time was legal, just because the police allowed it to happen.

"The right of the people to be secure in their persons, houses, papers, and effects, against unreasonable searches and seizures, shall not be violated, and no warrants shall issue, but upon probable cause, supported by oath or affirmation, and particularly describing the place to be searched, and the persons or things to be seized." -- The Constitution of the United States of America, Amendment IV

It might be a standard practice in some instances, but I'd fight that in court if it were me.

Well in Brown's defense there, Jim Jones was a VERY charismatic person who had MANY high profile individuals defending him up until he suicided his whole cult. It's easy to look back on that and be critical in hindsight. It's not like Jones was dripping "crazy" from his eyeballs or anything.

@OP: This law is going to be abused. Not to mention, I'm pretty sure it is unconstitutional. Restricting someone's second amendment right off of flimsy pretexts sounds VERY dubious legally.

I disagree as a licensed owner, concealed carrier. Youre speaking about a LAW. I assure you that in most cases...if you have someone who needed their weapons removed for some good reason...you can. And they wont be giving a damn about whether you have any legal right ot do it. Theyll be ticked either way.

Additionally, I didnt imply with the Police's permission...I meant for your personal security while removing them. Even if you get a legal law to allow you to do that...obviously something perhaps mental or safety-legal whatever...is going on...and it'll be in everyone's best interest to have them there to help the family facilitate the removal.

When someones going off...legal doesnt mater. Not at the time. To get them BACK? Yes. Of course.


Can anyone imagine someone being targeted by their ex-wife because she is "scared of you" so you lose your guns just as she hires a hitman?
edit on 1-10-2014 by nrd101 because: interesting thought

Look how sick some of the gun nutters are. They value their guns more than they value the life of a family member.