posted on Sep, 30 2014 @ 04:08 PM
link
This shouldn't surprise anyone. Lawyers are a couple notches below child molesters on the humanity scale.
The semi driver struck Morgan's car from behind. The semi driver was 100% at fault. Period. End of story.


Wal-Mart filed court documents this week claiming Morgan and others injured in the June accident were hurt because of "failure to properly wear an appropriate available seat belt restraint device." Morgan has sued Wal-mart over the accident, which killed his friend James McNair and put the comedian in several weeks of physical therapy. "My friends and I were doing nothing wrong," Morgan said Tuesday, thanking his fans "for sticking with me during this difficult time."

Read the story here, and here.

posted on Sep, 30 2014 @ 05:00 PM
link
a reply to: ColeYounger
Just like a big corporation to deny everything, was anything mentioned that the Driver was over his allotted driving hours? and was sleep deprived, to me that is just as being drunk and driving

posted on Sep, 30 2014 @ 05:27 PM
link
Everything about Walmart makes me...pausing to vomit.. Sick. I wouldn't shop there if it was the last store selling toilet paper before "Snowmagedon."

They are the face of pathologic humanity hating greed. They do stuff like this everyday.

All you junior "I have a Perry Mason super decoder ring so I know" wannabe lawyers are ignoring 2 things. First, New Jersey has a mandatory seat belt law. It is a criminal offense to not wear a seatbelt there. Second, New Jersey is a "comparative negligence" state. If the person suing did something wrong that contributed to his injuries, his recovery is reduced by the percentage of his negligence. A jury will decide who did what, and how much, wrong.

originally posted by: F4guy
All you junior "I have a Perry Mason super decoder ring so I know"

What's with the snide remark? You can correct or disagree without the name calling.

All you junior "I have a Perry Mason super decoder ring so I know" wannabe lawyers are ignoring 2 things.

posted on Sep, 30 2014 @ 05:41 PM
link
Wal-Mart is such a horrendous-grotesque leech on North America that should be more feared than the recent ebola epidemic. A scourge that grew not from capitalism but cronyism and bribes that let it grow to the unnatural size it is, like an evil plague that has taken over small & large business alike.

Anyone that thinks Wal-Mart is just a form a capitalist success has to ignore the amount of lobbying and government regulations it has successfully implemented while completely boycotting every union alive from being able to get its fingers in the door.

The only reason they have managed to get where they are is because of favourable legislation bought by bribes lobbying, While basically pumping out crap products from child labourers in China. At first people went because it was cheap, and the service was not that bad, but once they put out of business every competitor you are lucky to find a Wal-Mart with any carts in the front terminals, more than 2 or 3 people staffing the cashiers (at a store with 20 cash register lanes) and maybe 3 stock people on the floor. But don't be mistaken, there are probably a dozen theft reduction officers walking around in plain clothes making sure no one steals anything...

Wal-Mart is an example of the very worst kind of business that can get ahold on a nation should it be allowed to spread, should it be allowed to take advantage of everyone it can along the way, and by no means was it grown out of the free market... it would have died long ago if not for hands under the table paving the way for its slave-driven drop a sack of crap on your lap for $2-business platform.

One day I hope people revolt against walmart and organize rallies where the entire town marches in and walks out with everything not nailed down, ending its unholy reign on North American business.


*The following opinions and views do not reflect the poster nor the Above Network and are solely satirical in nature, the poster does not hold any liability to the views expressed in this post and merely posted for sh**'s and giggles, but, should walmart be struck down by the hand of god, the poster, would not weep for it. Thank you and good day.

*PS the poster does not condone any illegal acts against walmart, nor does it condone walmart stealing your soul.

posted on Sep, 30 2014 @ 05:51 PM
link
Does walmart own the truck that hit Morgan or just the trailer? I live near a walmart distribution center and they hire contract trucks to pull their trailers. If so the trucking company would be liable and not walmart. Just wondering,,
And he should be wearing a seatbelt. It is the law in that state.

posted on Sep, 30 2014 @ 06:08 PM
link
a reply to: ColeYounger
Mixed feelings about Wal-Mart. It's certainly an American success story. Started out as this. 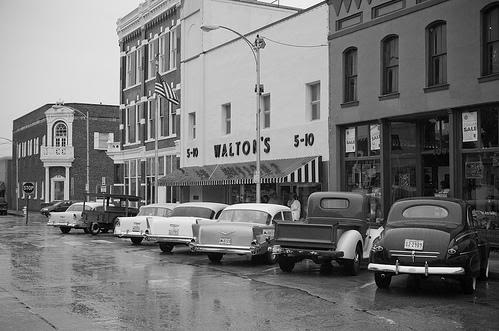 And with good business acumen, Sam Walton made it what it is today. Isn't that everyone's dream who is a business owner - to grow and prosper and be at the top of what you do?

In many ways what he did is much harder to do than say what Gates and Jobs did. They had proprietary stuff. Walton had to compete with well established businesses already doing what he desired to do. Sears Robuck, Macys, Gimbels and others were already way ahead of him in his 5 and dime store.

As for the law suit, well lawyers are going to do what lawyers do. It's their job. If they didn't do their job people would complain too.

PS not a big fan of lawyers, but like anyone else here complaining, you'll use one when the need arises.

originally posted by: ColeYounger
This shouldn't surprise anyone. Lawyers are a couple notches below child molesters on the humanity

I just joined up to tell you what an insensitive , ignorant and outrageous comment that is.
How about I molest YOU then sue you and you tell me which one made you feel worse. Sound good?
Outside of that your point is valid and just once again proves Walmart is inhuman and that really leads it to being a plague on society. With their bs wages and lack of benefits for most employees.

Even if the majority of those employees aren't human themselves and mostly thugs when its time to punch out. Hell , even while they are punched in. Atleast down here in the South.

From a judicial standpoint....

The act of not wearing a seat belt does not cause injury....

It's the act of having a semi truck slammed into the back of you car that causes injury....

So I fail to see the relevance of the Wal-Mart claim. So it comes down to, who caused the accident. Not how could the victim have better protected himself against the dangerous driver.