The Mysterious Ghost Ship of the Arctic, The SS Baychimo

page: 1
22
log in
join
share:
sled735
+2 more
posted on Sep, 30 2014 @ 02:07 AM
link
The seas of the world offer stories of mystery and wonder. One of the stories with high-strangness is the occurrence of ghost ships throughout history, vessels drifting in the sea without any noticeable, living crew.
Spooky stories of ghost ships have spread through the lore of the sea for ages, and they have become a topic of most all discussions on truly odd goings on of the high seas.

One such ship is the SS Baychimo, which has become one of the greatest and most enduring modern day maritime mysteries.
She was a steel-hulled 1,322 ton, steam-powered cargo ship that was constructed in 1914. 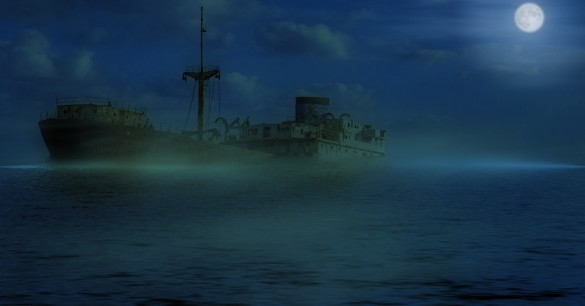 The Baychimo was on a routine transport run to Vancouver with a cargo of valuable furs, however, the crew had not accounted for the fact that winter had come earlier than usual that year. The ship and its crew were tossed about by icy blasts of wind and gripped by freezing temperatures, yet they pressed on, determined to deliver their precious cargo. Even as they pushed on through the ominous weather and menacingly choppy seas, a sudden blizzard descended upon the ship and brought with it chunks of pack ice that began to surround the Baychimo and its terrified crew. The ship became trapped by the circling ice floes, which closed in around it and gripped it in a cage of ice as the helpless crew looked on.


The crew was ordered to abandon the ship by the captain due to it possibly sinking, and make their way on foot about a mile away to the town of Barrow through hazardous, shifting ice floes. They took shelter in Barrow for two days before returning to check on the status of their abandoned ship.

When they arrived, the vessel had broken free of the ice and was drifting desultorily in the area. The crew decided to wait until they could retrieve the ship, so they camped out on the ice in an area where they could keep an eye on it.
Unfortunately, the bad weather did not let up, and on October 8, the ship was mired in ice once again. This time,the ship remained lodged within the ice with no sign of being freed anytime soon.

On October 15, the blizzard had not let up, so The Hudson Bay Company sent a party to rescue the crew by plane.
Twenty-two of the crew were rescued, but the captain and 14 crew members refused to leave. The Hudson Bay Company provided them with provisions to wait out the entire winter, or until the ship was free from the icy prison.


On November 24, a particularly vicious blizzard swept in and visibility in the swirling clouds of snow became nonexistent. The crew that had remained behind lost sight of the ship and when the storm lifted the following day, the Baychimo was nowhere to be seen. The vessel had simply vanished. Considering the severity of the storm that had hit them and the fact that there was no trace of the Baychimo in the vicinity, the captain and crew assumed that the ship had broken apart and sunk into the dark, frigid depths. The dejected crew decided to pack up their camp and head back to civilization.


About a week later a seal hunter told them that he had spotted the ship floating approximately 45 miles from where it had been trapped in the ice.
The captain and his remaining crew decided to head out to see if they could retrieve it, but once they located it, the captain decided that it had been too badly damaged by the ice, and was unlikely to remain seaworthy through the winter.


It was surmised that the vessel would soon break apart and sink, so the crew frantically salvaged some of the more valuable furs they had been transporting and had them airlifted by The Hudson Bay Company, after which the ship was abandoned and left to its inevitable fate.


Over the years many witnesses saw the ship floating aimlessly in the sea and tried to approach it, only to have it disappear before they could reach it.

In addition to the sightings, there were those who tried to approach the ship only for it to seem to elude pursuit uncannily well for a vessel without a crew. On occasion, the Baychimo was reported to simply vanish from view before it could be reached. Those that did actually manage to catch up with the elusive ship had little success in their endeavors to actually board it. Every attempt to board the derelict vessel was thwarted in some way, and every crew that tried were forced to let it go for one reason or another. Sometimes, the pursuers were simply not equipped to handle the task of salvaging the massive vessel, but other times failure came under more mysterious circumstances.

Freak storms would suddenly appear when people tried to go aboard. Strange occurrences happened every time someone came in contact with the ship, which over the years, caused the Baychimo to acquire a reputation as being a cursed vessel, a bad omen, and by 1939 there were many ships that would flee upon sighting it.

In 1939, after another failed attempt to board it, the Baychimo disappeared into the cold expanse of the Arctic for the next 23 years. It was thought that the ship had finally run out of whatever power had kept it going all those years and finally sunk, but in March, 1962, a group of Inuits saw it drifting along near the coastline of the Beaufort Sea. The ship had returned from wherever it had gone. The mysterious ship was subsequently sighted several more times up to 1969, when it was seen stuck in a pack of ice, as it was wont to do. It would be the last time anyone would see the ship. When a salvage party came to investigate the 1969 report of the Baychimo in ice, it had vanished by the time anyone arrived. No one has seen it since.

What are your thoughts on this story? Was the ship cursed? Will it suddenly appear again someday, luring unsuspecting sailors to approach it, only to swallow them at sea in a sudden storm?
Or, will it be lost forever, only to remain one of the greatest mysteries of the sea of modern times?

My opinion is that this is an interesting story. Thank you for sharing it.
Great OP! S&F

Wow, now that is a very cool and kind of creepy story!

It probably sunk by now, but you never know,
it could just come out of a fog bank somewhere to be creepy again!

Thanks, glad you liked it. I put some time into the OP.
I rather enjoyed it myself, that's why I thought it would be cool to post a thread here for others to read.

I really like reading stories like this. Especially about "ghosts in the machine" type scenarios where mechanical objects operate on their own volition. Great thread, S&F