posted on Sep, 29 2014 @ 06:15 AM
link
The 2014-2015 NHL season is just around the corner. I’m especially excited because after a 45 year drought, my beloved LA Kings finally raised Stanley—and wouldn’t you know it! They did it again only 2 seasons later. They will definitely be a major cup contender this year, having already eliminated a bit of dead weight and filled the cracks with new talent.

The thing that seems to be on many fans’ minds right now is if the disgraced and wounded Sharks will be coming back with a vengeance after enduring one of the most embarrassing reverse playoff sweeps in NHL history. I’m concerned as well. This rival team has honor to reclaim and everything to prove right now. They have the talent, and have now acquired a new head coach to spur them on. As much as it pains me to say it—I think my most dreaded rivals will be hoisting Stanley come next spring. This is my prediction, this is my fear. 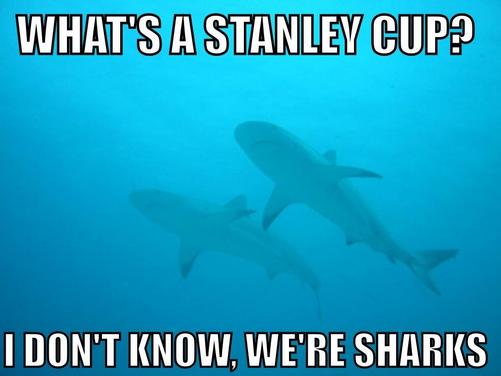 Anybody else have a guess which way the winds will be blowing? I know there’s a few hockey fans on ATS. Please chime in with your thoughts and predictions for the upcoming season!

I’d also like to pad out this thread with some Vital Hockey Wisdom for Everyday Life—the things we learn from this great sport that can help us achieve success and enlightenment when applied to daily matters.

1. You miss 100% of the shots you don’t take.
2. Move where the puck is going to be, not where the puck has already been.
3. It’s not a penalty if the referee doesn’t see it.
4. A goal is a goal, no matter how sloppily executed or whose skate it went off of.
5. The puck can pass the goal line even after you have fallen and hit the boards.
6. Overly aggressive play will leave gaps in your defense.
7. Even the 4th liners get lucky sometimes.
8. A tooth knocked loose cannot be unloosed, but it can be worn with pride.
9. Keep playing your position even if you don't get to handle the puck. You must be ready for unexpected moments.
10. The rink is equipped with numerous state-of-the-art cameras for video replay at multiple angles. Life only gives you a faulty, limited memory to reexamine game-changing moments—Pay close attention! 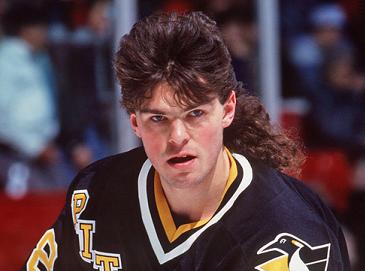 posted on Sep, 29 2014 @ 06:33 AM
link
I'm going on record as predicting the Boston Ruins ... I mean the Boston Bruins ... will take Stanley home at the end of the season. I don't see anyone in Canada being able to do it anytime soon. I may adjust this prediction after trades are finalized. But right now I'll say Boston.

I'm going to champion The Caps for East Conf. this year. I'd like to see Ovi get a cup before retiring.

Sorry to say but I'm one of those people who enjoys seeing the Flyers fall. I'm sorry! it's a sick compulsion of mine

Besides. Mike Richards is ours now

Ottawa Senators!!!
We just got rid of that lazy schmuck Jason Spezza and we have a very talented team this year.
Bobby Ryan was number 2 in the draft behind Sid Crosby...and we got him.

2 good goalies,a good coach and some talent might equal a stanley cup run.

I'll avatar bet you when we meet the Flyers in March?
Winner makes the loser wear any avvy they want for 24 hrs?


I am guessing by your avtar you are an ELO fan.

Have anything to say about the upcoming NHL season while you're here?

How about that new rule banning the 'spin-o-rama' from shootouts and penalty shots? Yay or nay? It's a crowd-pleaser even if it's technically against the rules. I think the ban is stupid and officials should just pay closer attention to decide when it's improperly used.


Words of wisdom from Dale Hunter: If you're not cheating, you're not trying.


Always going for the Caps...Usually a thrilling season followed by a disappointing playoffs...hoping things change this year. Tough coach might change a lackadaisical secondary scoring.
edit on 29-9-2014 by kelbtalfenek because: (no reason given)

Have anything to say about the upcoming NHL season while you're here?

How about that new rule banning the 'spin-o-rama' from shootouts and penalty shots? Yay or nay? It's a crowd-pleaser even if it's technically against the rules. I think the ban is stupid and officials should just pay closer attention to decide when it's improperly used.


Did you catch the Jeff Lynn Concert in Hyde Park London a couple of weeks ago?

Here is the concert in full

Sincerily doubt the sharks will ever hoist the cup. And they fired Richards? I missed the memo on that. I think hes a great coach. The problem was/is player leadership imo. Too bad they couldnt ship off Big Joe..

I dont have a "team" per se. But I like to cheer for the Ducks, although admittledly a bit less now that Selanne is gone (favorite player). The addition of Kesler and Heatley might push them over the top. Problem is Kesler is a Band Aid and Heatly might just be a cancer in the locker room. Itd be cool to see him rejuvenate his scoring touch... I guess we'll see.

Kings are obviously a contender, Hawks (huge Toews fan here), Bruins. INterested to see how the Pens respond with their new look. Im also interested in what Colorado achieves this year. They made some great additions imo especially with acquiring Iggy.

EDIT: Whoops, for got to make a prediction: Colorado. This is a loose prediction. Theyre getting exceptional Goaltending, have a great coach, many thirsty young guns/stars, and they picked up a few vets who are character guys and still can score. If they can add a Vet Dman during the season this team has a real chance.
edit on 29-9-2014 by Tucket because: (no reason given)

posted on Sep, 29 2014 @ 11:49 AM
link
Should be a good season.. Nothing like hockey for me, it's the only thing I really enjoy from the start of the NFL season because I know they drop the puck soon.

I am a Flyers fan so that is my focus.

1. Giroux will once again be a finalist for the Hart trophy and will finish in the top 5 in scoring. The same people that call him overrated and yet dont realize his league leading point totals over the past 4-5 season will still call him overrated.

2. The Flyers need B. Schenn and Couturier to really take the next step this season if they are to compete.

3. At some point I believe an injury will occur to one of the primary defense men and we will then see one of the 5 prospects come up..Ghost, Morin, Haag, Alt, Sanheim. Of that group I think Sanheim has the best chance of being a stud number 1 down the line but for the first time ever the Flyers are stacked on young defensive prospects.

4. Mason has to be Mason of last year and not revert back to most of his Columbus time.

Maybe I am bias, because I'm a die hard Hawks fan, but this final 4 would be fun to watch regardless. Just like last years real Stanley Cup Final, the Western Conference Final. Second best series i've witnessed, regardless the outcome, The Kings were the better team last year. Redemption will happen this year.

Best of Luck to all!

The 'Hawks are a terrifying hockey team. Every Kings fan was a nervous wreck last playoffs.

The 'Hawks are a terrifying hockey team. Every Kings fan was a nervous wreck last playoffs.


Same goes for the Kings. Whenever they were on the PP I had to close my eyes. Heck, whenever Drew Doughty shot I figured it was going in the net. This is the newest version of the Hawks vs Canucks rivalry, except its gonna be better because well, we've both won cups while Vancouver is satisfied with regular season championships.

posted on Oct, 8 2014 @ 06:46 PM
link
Cool thread. First things first i'm an Oilers fan and it is unlikely that they make the step into the playoffs this year. Having said that, the pacific division is wide open in my mind so anything is possible.

The Bruins won't be nearly as good as everyone is thinking they are going to be, they lost key players from last seasons president trophy team in Iginla and Boychuk. Chara is now 37 years old so there is absolutely no guarantee that he can still contribute in the manner that the Bruins need him to. Beyond that they are asking Krug/Smith not to have sophomore slumps and Rask to be a Vezina winner again. They will still be a good team, but not as close to the singular threat in the eastern conference that they were last season.

The question mark in the west for me is Anaheim. I would wager that they lost the most key contributors to their season last year out of any team (Selanne, Koivu, Bonino, Sbisa, Hiller). They are staking their season on a goaltending tandem with a total of 31 games of NHL experience and are asking Heatly and Kesler to return to their PPG form. Many pundits have Anaheim as a strong contender in the west but seem to overlook that they got their best goaltending from a goalie who is no longer with the organization and that Perry and Getzlaf had career high shooting %'s last season. I'm not buying the hype.

I'm looking towards a final four in the east of Tampa vs Boston and Pittsburgh vs Washington; in the west i can see it shaking out as a final four of Chicago vs St. Louis and Los Angeles vs San Jose.

With the finals being Tampa vs Washington and once again, Chicago vs LA.

In the cup final i can see LA vs Washington with LA repeating as cup champs. 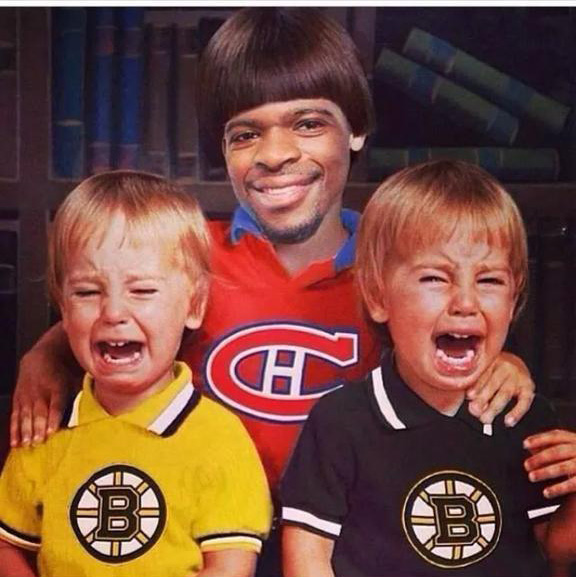 Bruins are gonna be cryin'. 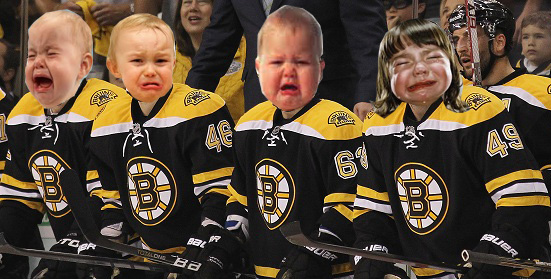 The Habs look like they're going to be a big contender this season, and I wouldn't mind seeing them capture a cup.