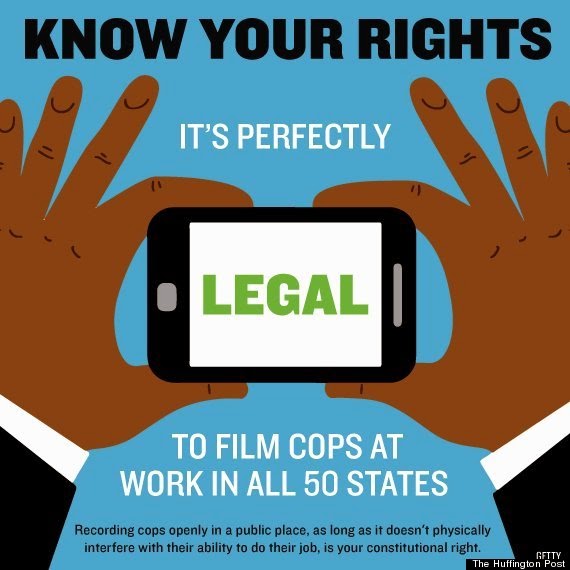 A petition has been filed on the official whitehouse.gov petition page calling for the United States government to classify the controversial police accountability group Cop Block as domestic terrorists.

Copblock says it wants to make police accountable for their actions. The organization’s members draw attention to police abuses that happen across the country, and work to film police in order to force transparency and accountability within their ranks.

The petition, entitled, “Officially label and classify any variation of “CopBlock.Org” members as Domestic Terrorists with DHS,” accuses the decentralized police accountability organization of promoting violence.

The petition, which was filed on September, 19 by an unknown person appears to have stirred up some reactions from other groups around the country.

The National Police Wives Association, along with a group calling themselves Police Blotter have called for a massive Facebook blitz against Cop Block.

“Call to all members. It has came to our attention that there is a petition circulating for the removal of the Facebook page ‘Cop Block,'” a National Police Wives facebook posts says. “We are asking members to report the page during 6-8pm CDT tonight from your personal facebook page. Or goal is to have 30,000+ reports asking for this page to be removed.”

In an ironic move of instant karma, it appears the National Police Wives Association Facebook page has been shut down. It had around 60,000 likes. The Cop Block Facebook page remains up.

If youve never been to the site, heres a link:

As far as I can tell, copblock.org is an accountability website. If (and thats a big if), if they are promoting violence towards cops, thats a separate issue.

Seems like what they do is report on and and document police abuses.

A couple of the groups involved (the National Police Wives Association and Police Blotter) have actually asked people to request the removal of CopBlock's facebook page...

posted on Sep, 25 2014 @ 01:31 PM
link
My guess would be anyone that has checked out Copblock or liked one of their Facebook posts is already on a watchlist.... that would include me.

posted on Sep, 25 2014 @ 01:32 PM
link
a reply to: gladtobehere
We are all considered terrorists already, they let an Agency Spy on us without reserve. Make us pass tests before we get on a plane.

Measures like this create Civil Unrest and prevent nothing.

Why is it a black ,(dark skinned), person holding the camera / phone in the poster?

Cop block started it's own petition. to classify "Police blotter" facebook page as terrorists. Should have gone with unconstitutional occupying army IMO.

posted on Sep, 25 2014 @ 02:06 PM
link
I don't think they should be labeled a terrorist group. That would place blankent judgement on all members and is not fair.

That being said there are many comments that are left by individual members condoning the random killing of law enforcement officers and their families.

Maybe cop block should start policing their own ranks as well.

Another White house petition thread. So a couple of people think this way and now we consider this news. This is why they started this propaganda machine so they could say .......Look people think we should do this.

And still the masses eat it up. Who cares if 100 people think this way. Or maybe it is done for other reasons.

This is farcical, and any administration that seeks to make terrorists out of the members of an organisation whose stated aims are entirely about protecting peoples civil rights, rather than inciting violence toward authority (which are entirely separate things), is deeply questionable.

The CopBlock people, if their only intention is to improve accountability, and perform entirely legal acts (those being the recording of a police officer as he or she goes about his or her business whilst on duty) in the doing of the same, are being unjustly targeted by what increasingly appears to be an out of control government. The person who came up with the idea to watch list these people, needs to be arrested for unpatriotic behaviour if you ask me.

It is essential, that in a climate in which the authorities refuse to respond to criticism of its officers, if they refuse to prosecute members of law enforcement for clearly questionable shootings, treat their officers as they would treat any other suspect during that process, stop giving golden handshakes to dodgy coppers, cease burying misdeeds, that someone out there keeps the law enforcement community honest, makes sure that they behave in accordance with the law, and with the constitution under which the people over there in the U.S. live.

Without SOMETHING more rigorous than cops monitoring cops (and doing a damned poor job of it too), the lack of oversight will result in an inevitable collapse of the ability of the law enforcement community to keep the peace, due to the fact that there will eventually be no one who has not felt the impact of poor policing strategies, and a lack of accountability.

This needs sorting out, starting with an out right ban on governments putting organisations on a watch list, unless they are actually a physical threat to the national security of the nation, unless that group plans actual armed assault on the government itself, its staff,its military, its law makers, and law enforcement frame work. There seems, at present, to be no reason to suspect that members of CopBlock are planning any such thing, making their addition to this watch list quite suspect.

America how to surpass the constitution and human rights:

Label something a terrorist.

Not that many will care on ATS but this article addresses some of the threats cop block members have made against law enforcement.

Like I said I don't believe the entire group is bad.

However if you read comments on their facebook pages you can see that even though they say they are against random violence against cops they do little to police their own ranks.

I do think it is rather hillarious that many copblock members accuse ALL cops of being bad, yet get pissed off when they are judged as a whole by the negative actions of some of their members.
edit on 25-9-2014 by TorqueyThePig because: (no reason given)

If there are violent threats then sure deal with them

But I think its pretty cliché and ridiculous bringing out the terrorist card.


It seems in the USA is something inconvenient, there is a right that needs surpassing or a group the political classes don't like you just label them a terrorist.

So do you believe that Cop Block members should be classified as terrorists? You say that you don't, but the position that you're arguing from is the exact same position as those who do. That Yahoo article is a poorly written hatchet job. There was a person who had access to the Cop Block FB page in the wake of a cop killing and hailed them.. and then he promptly had his posting privileges revoked and was banned from the page.

But, naturally, the apologists who constantly bring that single incident up tend to leave out the part about Cop Block 'policing its ranks,' your words.

As far as individual commentators who make inappropriate comments - I tend to think that the majority of people are straight up stupid. That especially includes people on FB. You're going to find stupid wherever you look for it. The difference is, stupid cops have badges and guns and tasers and authora-tah.
edit on 9/25/2014 by Monger because: (no reason given)

Here's your hook back. The worm has turned.

What group of people are beset upon the most?

I suspect it is not folks of your ethnicity?

No I don't think the entire group should be labeled as terrorists.

I was just simply pointing out the fact there are many members that condone the random killing of law enforcement officers and their families. I have read numerous comments with my own eyes.

If you think only one member of copblock was hailing the Vegas cop killers you are sadly mistaken.

I was also pointing out the hypocrisy that many copblocks are guilty of as well.

Just as such copblock needs to police their ranks the same as any law enforcement agency. I thought I made that pretty clear in my first post.

Stupid copblock members can have guns and tasers too.

posted on Sep, 26 2014 @ 09:00 AM
link
Groups like police watch groups are in fact so protected under the 1st amendment that one should be scared to death that someone would have that level of ignorance about the constituiton!

posted on Sep, 26 2014 @ 09:14 AM
link
I guess I'll be the unpopular person in this thread. I find this group and it's focus questionable. There is a fine line with what they are doing and I think they fell over the wrong side of it long ago.

Here are some of the comments from the Cop Block Facebook page. These are the kinds of people that this group draws as supporters:

on a picture of a police car on fire

showing a picture of a dead police officer

I don't know how anyone would support a group and it's members like this. I find it disgusting and reprehensible.


In an ironic move of instant karma, it appears the National Police Wives Association Facebook page has been shut down. It had around 60,000 likes. The Cop Block Facebook page remains up.


just made my day. That is lol!