posted on Sep, 24 2014 @ 04:28 PM
link
The Iraq War ended almost three years ago... then why is it costing us $7.5 million a day?! To continue our history lesson on the Iraq War, I detail the broken promises and false claims made by the Bush and Obama administrations in our times of war and terror. Was George W. Bush's mission actually accomplished in May 2003?

If you're having trouble watching the video in the thread, you can also watch here: Iraq War: Broken Promises False Claims

Indeed. The summary: the government lies all the time about everything that is advantageous to them to lie about.

Further, when we say "the government", it is not an inanimate entity, it consists of people --- real flesh-and-blood liars, abominations and violators of truth. Their goals are neither benign nor benevolent, but selfishly diabolical.

But alas, it has been this way for centuries, nay, millennia. Rest assured, where there is government, there will be lies.

And perhaps the most important point: war has nothing to do with justice anymore. War is a financial mechanism, nothing more and nothing less. The price is blood, and that is now a cheaper price than gold or oil.

There is no cure, to my mind. Where there is man, there is evil. It is simply a matter of probability, and the probability is 1.

posted on Sep, 24 2014 @ 05:13 PM
link
I have noticed over the decades Mr Ventura that if a elected official is moving their mouths there is a 100 % Chance they are telling lies

According to POTUS we were supposed to be finished with wars in the Middle East. Pretty nifty to have a threat like IS come along just as we were on the outs and pull us along with 30 other nations right back into Iraq.. oh and Syria.

Not intentionally cross threading here, but, let's face it, this has propaganda written all over it. Mossad, the CIA, MI6, I'm not even sure what to think about these groups any more. Who are the real threats to our country? Grisly decapitation videos and that childish propaganda response from the United States all seem to be pushing the same agenda. War for proffit and IS is painting themselves an easy target. The politicians with vested interests in the defense industry, like McCain for example, are going to make money hand over fist off of this situation.

It was only a year ago that Senator McCain was visiting with the very people we are now attacking, along with the 'coalition' to stop the 'network of death'. Aside from the beheadings, which are brutal and unfortunate, there is no threat to our country directly. My thoughts lean toward a heavy intelligence community involvement that has pushed this new war onto us to further western interests in the Middle East, particularly Syria. 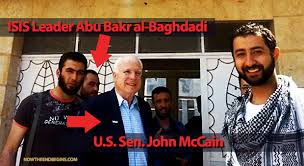 If Obama had a genuine interest in preserving an American way of life, and keeping our people out of harms way, he has an interesting way of expressing it. What a mess. Tax payers flip the bill, politicians and big corporations get paid billions more. Something just smells nasty about this whole scenario.