Scotland, Wales, N.Ireland, and England...it's our Union, let's now fix it together.

posted on Sep, 19 2014 @ 04:26 AM
link
So, the people of Scotland have spoken:
2 million want our Union of nations
1.6 million want independence
Over a million didn't care enough to vote either way.
That is a pretty clear result to last a good generation or more.

For the record, I am glad the Union has not been broken, not for reasons of oil, not because I feared problems for England, Wales, and N.Ireland if Scotland had left us, but simply because I have only known a United Kingdom, and I genuinely believe we would all be weaker divided.

I am also glad that the Scots had the vote, and made the choice to continue working with us as the dysfunctional family we can often be.
Let's now put an end to the silly cries of 'freedom from British rule' now, Scotland has chosen to continue as a key player in the Union, not to be 'ruled' by Britain or anyone else. Let's forget the bickering of the last few years and move on together as a stronger more representative Union of 4 nations working for our common good. Let's all recognise who the enemy of our people is, the corrupt politicions in Westminster, the shady multinational corporations who are in bed with them, and those who wish to divide our family of nations.

I say thank you to all those good folk who have chosen the Union over separation, thanks for the vote of confidence in the people of Wales, N.Ireland, and England who share the same challenges and aspirations as you do in your daily life. All the problems in Scotland exist equally in the rest of the UK so let's move on and work together to change our country for the better.

I don't know the answers, but one thing is certain, our Union will forever be changed after this vote. It is now up to us to shape it for the next century into a fairer, more representative country which can be an example to the rest of the world of how decent thinking folk can work together in a modern nation.

There are many problems such as the West Lothian question, the Barnett Formula and all the rest of it but if we all are working 'for the family' now instead of our separate nations we can be stronger...and better together.

I'm glad you decided to stay Scotland, the bickering is over, and I hope all the energy of the independence campaigners can be directed towards a fairer UK for all of us...and against those self-serving bastards in Westminster.
We are a powerful mix of tribes when we work together so let's focus on that and actually do it now...together.


Yeps! Now if we can all just get our pickaxes out and carve London away (or perhaps just The Square Mile) and maybe float it into the mid-Atlantic, we may just have a chance of building a better Britain!

Do you honestly think anything will change? It was pointed out during the discussion on the tv that the government is actually too busy with the deficit, the IS syria bother an d several other things to even be able to give scotland too much time and whatever it promised can on ly be delivered once the deficit is really brought down. Sorry I think if you bought what the politicians all said when they were interviewed where they all were saying everything has to change - the people have spoken…. Do you honestly think thaat proportional representation will come to the rest of the UK? They have kept democratic voting in politics out for years and are unlikel.y to change as will anything else exdcept that now most english kn ow we get less spent of us than the scots yet we provide the majority revenue…. Trouble there probably but we will see - you clearly don't understand Westminster which still rules in tact and has great plans for grabbing your savings should another bank get itself into trouble somewhere else in the world.

posted on Sep, 19 2014 @ 04:40 AM
link
a reply to: skalla
Haha, perhaps not so practical to do it but I like the sentiment!
We all know who our common enemy is, the square mile and Westminster, this could be a day of change for all of us and I genuinely believe we can improve things for all of us if we work together from now on.
If we don't take the opportunity now then I will be ashamed to tell my grand kids why we didn't.

posted on Sep, 19 2014 @ 04:51 AM
link
a reply to: celticniall
I hope that with 4 nations working together as a combined force we have more chance than divided.
If you disagree that's cool of course, again you must be one of those who prefer to meekly bend over than explore options for change.
...do you provide the lube, or shall I bring my own?

Do you honestly think anything will change?

Something already has changed.


I'll give you a hint with this picture. 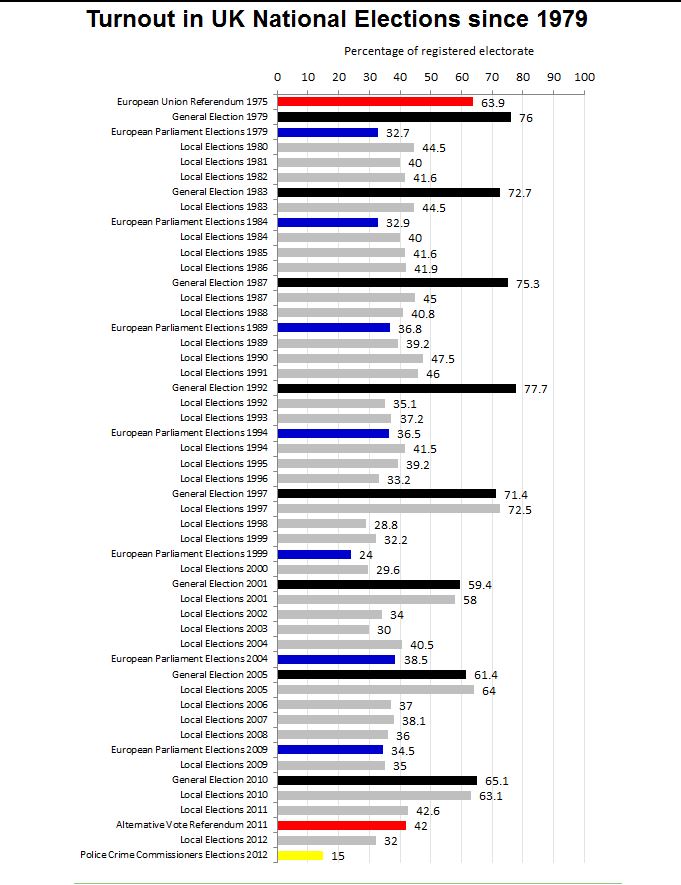 There hasn't been a turnout like this since the 1950 general election, and I'm pretty sure it even beat that one. The number of people who registered to vote being at record levels as well. To put this in a larger perspective take a look at elections around the world.

The size of the turnout, the number of people who registered, this is going to rock all the think tanks. There is a lot to be learned here. Something already has changed.


Compare the turnout to EU elections. 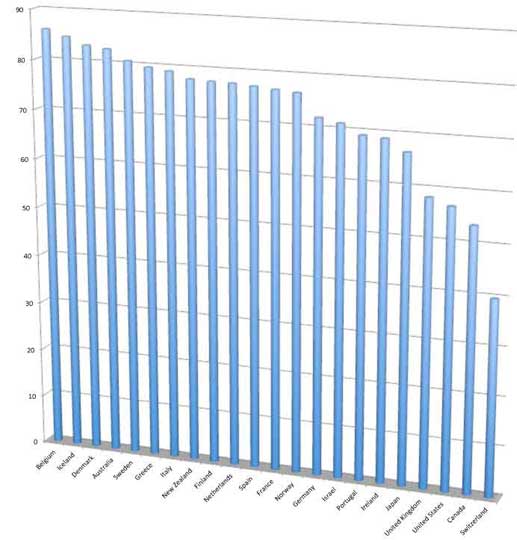 Mike Grouchy
edit on 19-9-2014 by mikegrouchy because: format

originally posted by: celticniall
.......what exactly do you think will change?

Voter turnout is something politicians feel. Really feel. Sure they talk a good game, and they posture like pros, but nobody has seen a registration and turnout like this. And when people start to care, they will find their representatives start performing less like wind-bags, and more like elected authority.

originally posted by: grainofsand
a reply to: Shiloh7
Ah, defeatist attitude of just give up then, bend over and take it yeh?
Do you supply your own lube?

Oh my God? What do you think Scotland has just done? Did half of us bend over and take it? Did we just give up and accept it? We tried to make a difference and tried to change the status quo, things that you have lambasted others about in other threads.

Better together? Do you honestly, honestly believe that the Tories are going to keep their promises, that things are going to be better now for Scotland, Wales, Northern England and Northern Ireland? Just walk me through that one please, because I'm not seeing it.

posted on Sep, 19 2014 @ 04:58 AM
link
a reply to: mikegrouchy
True, and Scotland has inspired the rest of us to look at how our Union is structured fairly for all of us.
Anyone who thinks that Westminster can just run with no change is in for a surprise. This day will change how we all work together...and I hope it will be for the better of all of us.

posted on Sep, 19 2014 @ 05:01 AM
link
a reply to: beansidhe
Why do you specify Northern England?
We are just as skint and forgotten about in the SW of England where I am.
I guess you are a bitter Yes voter then?

Get over it and move on together, or are you not prepared to accept the result of a democratic vote?

Lubed supplied only when stuffing an idiots cap down your throat for such rudeness.

Don't know where you come from and don't care but the UK is so finely sewn up there will be no chan ge. This vote got though b ecause of a naive and stupid prime minister and if you think the English will get a chance to vote to leave the other country's you are - where is your location - ah! the planet of 'my perception' perhaps you should shift your perception of things in the UK.

originally posted by: beansidhe
Do you honestly, honestly believe that the Tories are going to keep their promises, that things are going to be better now for Scotland, Wales, Northern England and Northern Ireland? Just walk me through that one please, because I'm not seeing it.

The Tories may be falling over each other to get a piece of that voter turn out. Take a chance and tell them what you want. I have a feeling The Parliament is listening right now, like never before.

Your OP encapsulates the way forward as I see it, entirely.

posted on Sep, 19 2014 @ 05:10 AM
link
a reply to: Shiloh7
I'm a Welsh bloke who lives in the South West of England.
I do not subscribe to your defeatist attitude, but I respect your right to hold such thoughts.
This thread is about positive thoughts for the continuing UK as 4 strong peoples working together. If you have no hope thats cool, but keeping on about it is well...defeatist, and says much about yourself.

Yes I am a bitter, whinging, rabid, Scottish yes voter (did I miss any?) who, if I hadn't taken the opportunity now, then I would be ashamed to tell my grand kids why I didn't.

You haven't explained how the Tories are going to make life better yet..but I'm all ears.

You haven't explained how the Tories are going to make life better yet..but I'm all ears.

Their job is to enact it.