What's everyones opinion of this? 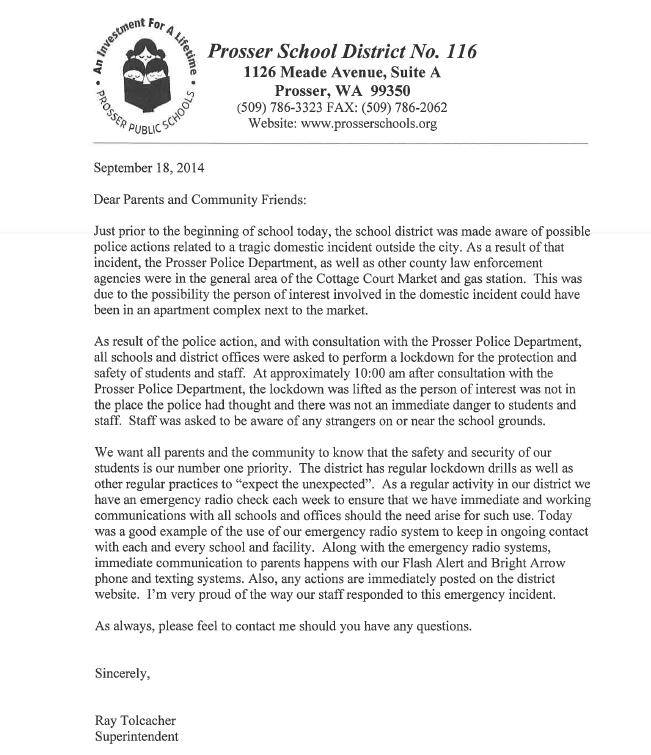 The comments by the people in the article like the apartment owner are of awe, like when you see a really crazy lightning storm. They kicked down the school and hospital like there were armed mobs for one guy with a knife.

posted on Sep, 19 2014 @ 05:22 AM
link
We NEVER had a lockdown drill in the years I went to school......
I really think this lockdown idea is simply a programming device for social engineering of the children more than any safety concern......

Lockdown drills are very common nowadays. It is a direct result of the increase in active shoot situations.

It sounds to me like it was unnecessary. The police thought they knew where the person was, so they had a lockdown of a nearby school. Then they realized they had no idea where the person was..........so they lifted the lockdown? Then had the teachers be on the lookout themselves? If anything, their actions were a bit backwards. Knowing a violent person is out there in the vicinity of the school, but not knowing where would be more of a concern I think then the police knowing where he is and having him surrounded. When they realized the person wasn't where they thought he was, that would have been the time to put officers on the school grounds to keep an eye on things until they pinpointed the whereabouts of that person.

No need to make the students and parents worry about something.........unless the police and the district don't know what the hell they're doing.

Where is Prosser anyway?

posted on Sep, 19 2014 @ 07:09 AM
link
My daughter is in high school and they have locked it down at least once a year for the last 3 years. Back when the whole Purge thing was going on, they locked a school down in the next county and sent notes home about it with my daughter. They also called explaining what went on and that they had police at the school all day to makes sure nothing happened here.

Just the other day we had a bus driver who had to pull the bus off the road and wait for the police to come because a Muslim kid got on this bus and said he would blow it up. The driver didn't stop for that though. Another child yelled out that the Muslim kid had a bomb and everything went to hell in a hand basket shortly thereafter. Another call home explaining what happened and assuring everyone that they were keeping our children safe.

I think they do things like this for CYA (cover your arse) reasons. Imagine if they didn't lock it down that one time and something actually did happen. The fallout would be nothing short of a second Hiroshima. Seriously.

Do they overreact? Absolutely. But they really have no choice IMO. I live in the boondocks where stuff like this doesn't really happen and they still respond like this. It's a whole other world than when we were kids for sure.

A poster above said something about conditioning. I'm not sure lockdowns are done for that purpose, but I do think they are conditioned to many things at school on a daily basis so who knows.

Short answer.... They have to do this. Even if it seems trivial. All it would take is not doing it once and losing a child because of it. Their hands are tied. Damned if you do and damned of you don't.