posted on Sep, 18 2014 @ 08:08 PM
link
Looks like some women are losing interest in the constant onslaught of malarkey by Democrats about women being downtrodden and maligned and degraded.

A New York Times/CBS poll has Women thinking different about House of Representatives candidates than they did recently.

The most interesting finding of a recent NYT poll on voter preferences before the midterms: The Democrats have lost their edge with women. Though the NYT write-up of the poll doesn’t mention the change, it shows up in the accompanying graph. When asked “If the 2014 election for United States House of Representatives seats were being held today, would you vote for the Republican candidate or the Democratic candidate in your district?” women favor Democrats over Republicans by one point only, 43 to 42 percent.

This is a huge swing in a short period of time: just one month earlier, women preferred Democrats by 51 percent to 37 percent in response to that question in a similar Wall Street Journal poll. Nobody quite knows what accounts for the shift, but given that support for President Obama’s foreign policy has seen similar big drops among women, it’s likely the recent global unrest is part of the cause.


see results of the poll that includes a lot of data....
Democrats Lose Edge with Women Voters

More telling stuff later in the survey you are using. 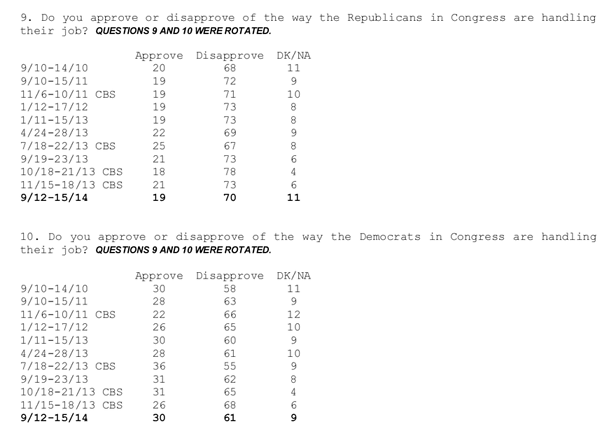 One of the main goals of the agenda is to keep us at war with each other. And focused on money.

What surprises me, is that the democrats have been in power in the past.

They are currently in power.

No politician actually wants to win against poverty, because that would eliminate their voting base.

This woman hopes they don't.

posted on Sep, 18 2014 @ 09:03 PM
link
I'm a woman and your charts and graphs are silly. The only things I care about (as a woman) are: equal pay for equal work (meaning men don't get paid more for the same work as they do now) , control of my body as a reproductive vessel (meaning you don't get to choose - I do), and abolishing sex with children (meaning anyone who has sex with children gets universally punished. And further to that we prevent it. Hello.). Aside from that democrat-republican means nothing to me.

This woman hopes they don't.

you should always put horror warnings to links that have Hillary pictures !!!

posted on Sep, 18 2014 @ 09:21 PM
link
If there could actually be a viable Left party, nearly all women, minorities and cats would abandon the Dems.

With Debbie Wasserman Schultz as the DNC spokesperson? How can they not lose interest? That woman is just plain annoying and ignorant. Just a step down from Pelosi or Boxer or Fienstien. Though I think they are running neck to neck over the cliff like the lemmings they are.
edit on 18-9-2014 by TDawgRex because: (no reason given)

originally posted by: Kali74
If there could actually be a viable Left party, nearly all women, minorities and cats would abandon the Dems.

Where *IS* the "viable" Left party anyway?

There isn't at the moment. People are too afraid to give the GOP any ground by splitting off.

originally posted by: otherpotato
I'm a woman and your charts and graphs are silly. The only things I care about (as a woman) are: equal pay for equal work

Isn't it possible that women are paid less because they aren't as physically capable as men for the most part? For example, when I worked at a hardware store I had to leave my department (building materials) and go to the nursery every time one of the females down there sold a tree. Apparently these were too heavy for them to pick up and place in the bed of a customers truck (maybe ~50-80 lbs). So in theory not only was I doing my job, but also going to another department to do part of their work because they were incapable to doing it. Therefore I believe I deserve to be paid more since I was more productive.

The agree with you (aka the left) for the most part when it comes to reproductive rights. However my only complaints are:

- I have never asked anyone to pay for my condoms
- Women have the best of both worlds:
1) Don't want to carry to term even though the man wants you to? Too bad.
2) You want to keep the baby but the man wants you to have an abortion? Too bad (and be ready for child support)

I agree 150% with you, but I think heavy handed punishment of sex offenders is generally a conservative trait. Libs would rather create some sob story to justify why someone screwed little kids, or say something like, "How dare you condemn his/her sexuality! S/He was born that way!"

originally posted by: Elton
Here are the survey results... (just the data, no fancy charts or graphs)

More telling stuff later in the survey you are using.

What surprises me, is that the democrats have been in power in the past.

They are currently in power.

No politician actually wants to win against poverty, because that would eliminate their voting base.

You're being too hard on them, beezzer, because Democrat control of the House and Senate for 60 of the last 80 or so years (and the presidency more often than not) just ain't enough to get the job done. Its hard work manipulating and exploiting people into believing that you actually care, apparently.

posted on Oct, 25 2014 @ 06:26 PM
link
I don't think any more of the Republicans on women's issues than I do the Democrats. I think the Repubican party is nothing more than Democrat Lite.

I hold no more hope for this nation if the Republicans win both the House and Senate this time around. I don't think much will change.


I have not heard any Republicans ask the simple question...

If a woman makes less than a man for the same work...why would anyone ever want to hire a man....ever??


Once you understand that question....you will understand the phony nature of both political parties and why I hold little hope for any real change...only more exploitation and taking advantage of carefully cultured public ignorance on many issues and thinking ability. In short ..more political whoredom from both parties.

I can do this just as well with other issues but this topic or thread is about women voters.