page: 1
36
<<   2  3  4 >>
log in
join
share:
Rezlooper
+10 more
posted on Sep, 16 2014 @ 10:29 PM
link
So, the other day a Facebook friend of mine forwarded me a post by another friend who posted some images in a Group that talks about UFO's and other phenomenon. Anyways, after looking at the pics (provided below), I started reading some of the comments. There were nearly 80 comments. This was late at night on Sunday when I was reading them and it was actually while I was laying in bed on my phone. I figured I would wait till the next day to check them out on computer because I'd be able to see the images much better. Anyways, on Monday, when I checked my messages I found out that Facebook had completely removed the post. At first I didn't think much about the pics and actually was considering the idea that some commenters suggested...radar glitch, until they removed the post. Why would they need to remove such a post? It makes me now wonder if there really was something to the images. So, I messaged the friend and asked him for the images. He provided them and here they are. I'd really like to know what you all think of these. You can see the time stamp on there. My friend said some images were there on the radar for ten minutes. Some on the FB page posted that it could have been HAARP or that it had to do with the solar storm this past weekend. I don't know what to think yet, but I'd sure like to get some of your opinions.

These images were captured over a period of 25 minutes from 10:23 pm until 10:48 pm on Friday night, the night of the solar storm. I'm not sure how a solar storm would cause this type of radar image. 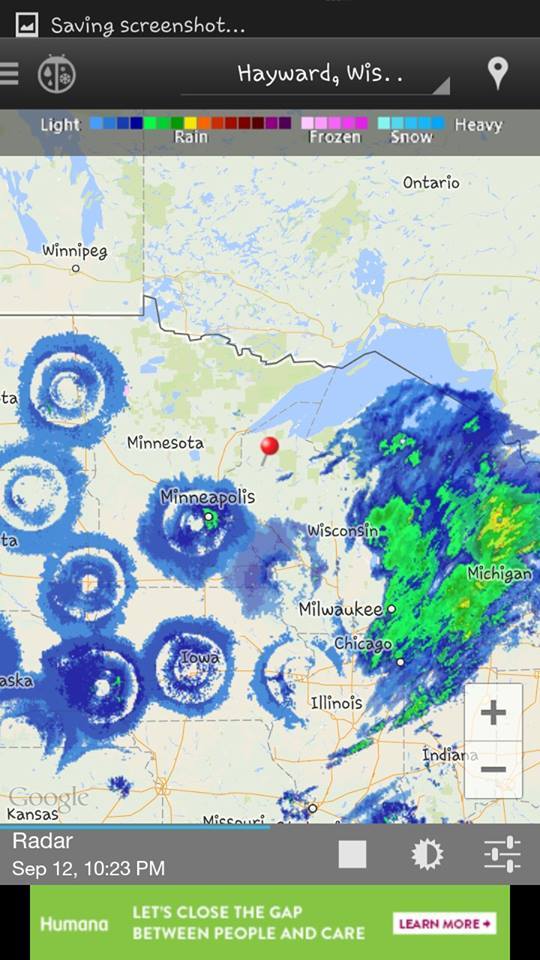 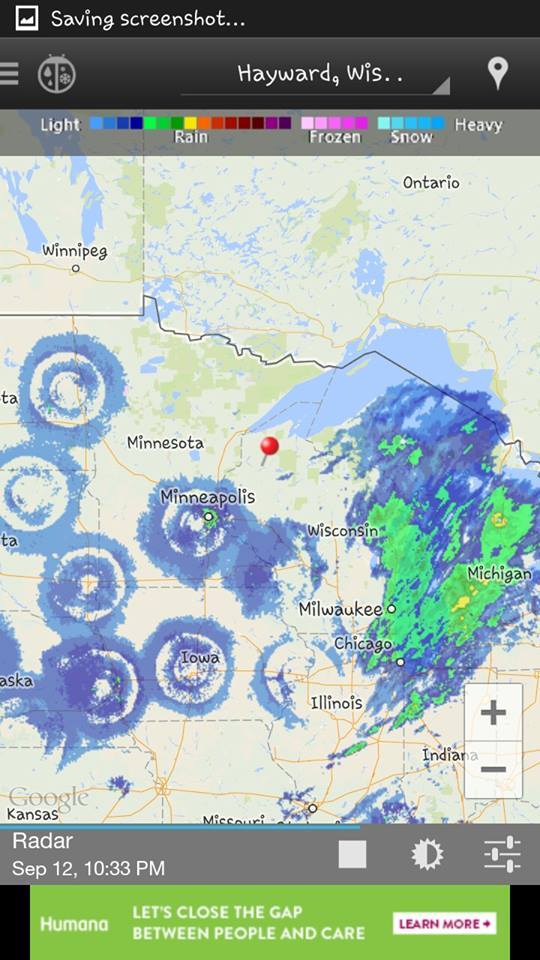 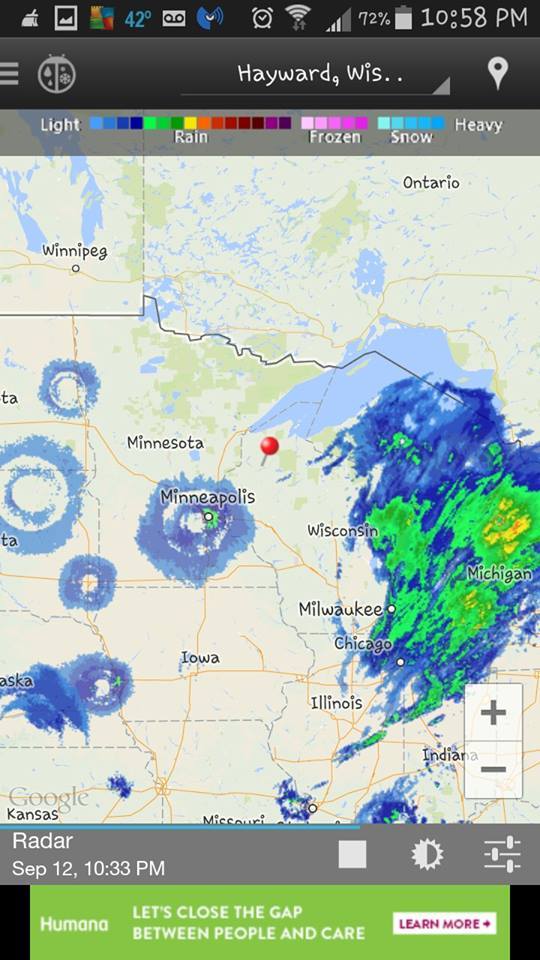 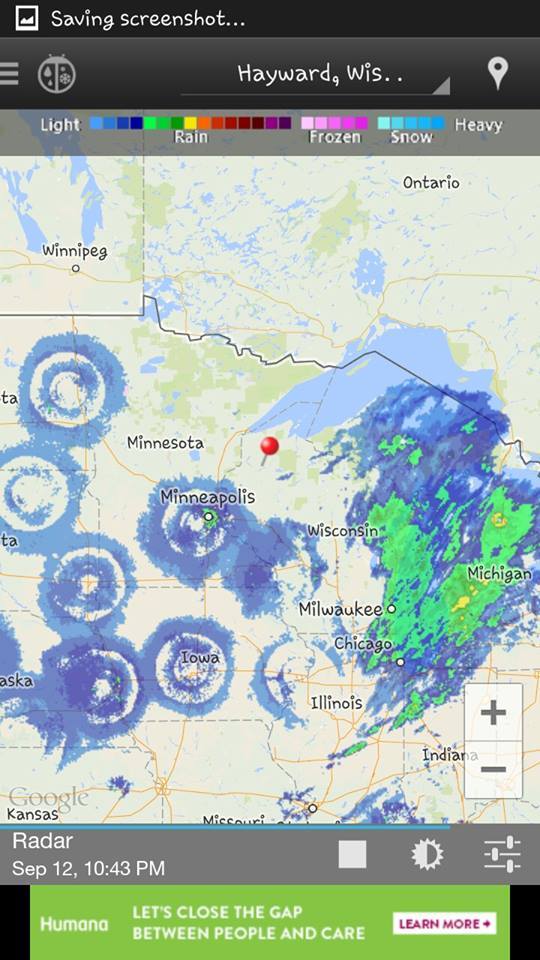 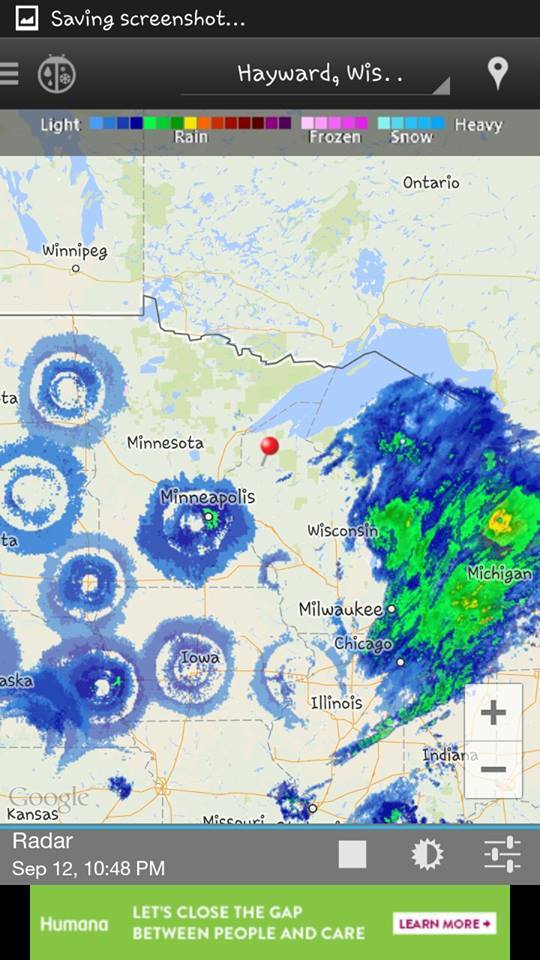 posted on Sep, 16 2014 @ 10:40 PM
link
Facebook has a history of removing whatever they want. This is either a good fake or unprecedented (at least to me)

Nature's acting up or maybe we did something.

I have seen photographs of "vortex clouds" from the ground, maybe this is them on radar? That large? S + F

Do you see the size of the area these are covering though. That's a pretty big area for fog.

Trust me, this isn't a fake. And yes, if it were, it would be a pretty damn good one. It makes no sense that they would remove something like this. Well, maybe it does, but not to me, unless there really was something to these images.

Kudos to your friend for keeping the images.

I have a good friend who lives in Minneapolis and I just messaged him about the weather on the 12th. I'll update this post when I receive his reply.

I did. It seems to come from multiple sites, roughly covering several states.
But seeing that the storm front just moved through and another one was following closely, coupled with the time of day when the dew point is approaching, the conditions seem right...

And Facebook remove them?
That would send up a red flag to me, when I otherwise would (probably) accept an explanation of 'glitch' or 'fog.'

Rez, was there anything saying why they were removed? That's just odd. The pics AND the FB actions.

posted on Sep, 16 2014 @ 10:47 PM
link
On a more or less benign note, Facebook, like you tube, has a thing about copyright infringement. Not saying that was the case, but something to consider...

I just thought about that. Are those Humana banners part of the images he uploaded to Facebook or parts of your particular ss's OP?

If the original posts on Facebook included Humana banners, Google maps, etc they might've viewed it as a violation of their T & C.

I have a good friend who lives in Minneapolis and I just messaged him about the weather on the 12th. I'll update this post when I receive his reply.

Notice how there is one of the circles stays directly over Mpls the entire duration while the other ones are moving around or fading in and out. If I remember right, up here in northern Wis it was clear that night.

Did not notice that until now. The large one over South Dakota also stays the same more or less.

E: I have to add that these clouds are appearing and disappearing fairly quickly. I've seen radar images before and they normally don't do that. They'll dissipate but it's gradual.

This is as if the clouds are being created out of thin air, either by a source under each of those clouds or one that is influencing the entire region.

Someone slipped up, these weren't supposed to be on the net.
edit on 16-9-2014 by Yeahkeepwatchingme because: (no reason given)

And Facebook remove them?
That would send up a red flag to me, when I otherwise would (probably) accept an explanation of 'glitch' or 'fog.'

Rez, was there anything saying why they were removed? That's just odd. The pics AND the FB actions.

No, my friend says there was nothing, no word. The post was just gone. The message on the post when I wen there the next day said that it was removed for one of two reasons and one of them was that the images may not have belonged to the poster, but that's ridiculous.

EDIT to ADD: Just seen your posts about Humana. That may be it then since the message I just referred to said he had an image that didn't belong to him. Maybe he has to crop that off the images and then repost them.
edit on 16-9-2014 by Rezlooper because: (no reason given)

WeatherBug is probably a rival of some sort...


I mean from photo to photo.

posted on Sep, 16 2014 @ 11:03 PM
link
the images shown a screen caps of Doppler weather radars - and yes the do show glitches - its a pretty common occurance

as for their removal from farcebook - heres a idea for you :

did the uploader delete them himself to cause drama once the explaination that they were glitches was undeniable ?

Here is from friend, just messaged me

"hey tell them wen we had clicked the play button on the weatherbug radar everything was moving BUT the circles they were statioinary. i just asked my friend that her and i seen this and she remember we hit play"