Yes, you read that correctly. According to data obtained by NPR from the Pentagon, the federal government has sent weapons of war including guns and tanks to 26 school police departments across the country free of charge, making the public education system’s already tense environment even more hostile to learning.

Just last week, the San Diego Unified School District Police Department announced they had acquired a hand-me-down Mine-Resistant Ambush Protected vehicle from the Pentagon. The $733,000 war machine was sent to the department free of charge, as with all surplus equipment in DOD’s Excess Property Program, to fight the supposed crime that lurks in hallways full of young children

Link to press release for SD getting their MARP 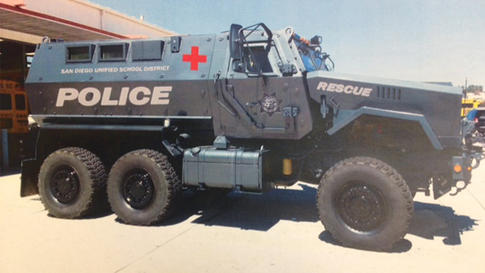 their will look just like this, only repainted yellow...

Don't laugh...San Diego Unified School District is the second safest school district in the nation and you know why...
they got armored school busses that can do double duty as party bus to tourist vising Mexico...

Okay look, I can see where school, always tight for money would be thrilled to get a freebee, hand-me-down...
but come on...MARP and other such weapons... Yeah kindergarteners are a real handful but man...

Now Militarizing local Police is one thing but School Police? Well that's a step too far.

Yeah, cause we always need to protect ourselves from those kindergarten terrorists and their IED's.

lol seems the military has a lot of extra equipment they want to write off.

I just want to know what school district got an Abrams tank!!

posted on Sep, 15 2014 @ 03:07 PM
link
All that stuff coming back from 'raq and'stan has to go somewhere. they can't just decomission it all, and you know when the .gov buys stuff they buy it in bulk

lots of toys for everyone [.dept, .agency] to hand/pass out at will.

first the police depts get all kinds of grants and freebies from the battlefields. now schools to...

hell... before you know it they'll have hummer merry go rounds.

posted on Sep, 15 2014 @ 03:08 PM
link
The word that pops into my head is psychotic... I'm wondering how the Pentagon is choosing disbursement recipients.
This just blows my mind!

posted on Sep, 15 2014 @ 03:12 PM
link
Maybe I'm a sucker, but I don't see a huge problem with it. Yes, it's a DOD hand-me-down (read: write off). Yes it is a military vehicle. But really, it's just a glorified armored jeep. I read the article at the link you posted, and they sell the idea really well (again, maybe in just a sucker). The school security guards aren't going to be toting ARs or whatever, this is, according to the article, meant to drive right up into the middle of a shooting to try to get kids out. Yes, as a parent I'm biased. But I'd rather have that thing between my kid and a gunman than nothing at all. Most people associated with schools have a concern for the children, and I don't think this has as much potential for abuse of power as it would if it were handed over to a SWAT team. Might be naive of me, but I think that the folks behind this would genuinely use it exclusively for protectingn kids if need be.
edit on 15-9-2014 by MojaveBurning because: Typing on phone

posted on Sep, 15 2014 @ 03:14 PM
link
Nobody has to take this stuff they have to request it. And it is not always is working order and mostly stripped down. Still it is cheaper to convert some military surplus stuff for civilian use than it would be to buy it new.

What is odd is that something that has been going on since then end of WW2 is suddenly evil.
edit on 15-9-2014 by MrSpad because: (no reason given)

I bet they expect a major attack on schools.


I just want to know what school district got an Abrams tank!!

My guess would be a district in Detroit.

posted on Sep, 15 2014 @ 03:57 PM
link
Makes perfect sense. Expose the young kids to an over-militarized system from a young age and they'll eventually think it's business as usual.

Now I'm waiting for the schools to hand out a "I'm a Good Student" badges when they tell the teacher what mommy and daddy said about taxes.

posted on Sep, 15 2014 @ 04:33 PM
link
I've seen several school districts where their "school security patrol" has military style vehicles such as these.

They most likely voted for this insanity.

How many people were so happy to make their beds and now they refuse to lie in the mess they made?

originally posted by: Yeahkeepwatchingme
Makes perfect sense. Expose the young kids to an over-militarized system from a young age and they'll eventually think it's business as usual.

i dont believe the schools are going to have these things just sitting in the school parking lot everyday. more likely theyll only be seen evacuating kids from a school shooting. i dont think exposing the kids to an over militarized system is the agenda here. thats already been done through their exposure of everyday society and television

An MRAP would have been completely useless at Columbine. What would they do, the same thing the local cops did? Sit outside the school while students were being murdered on the inside?

ETA: I see the poster above me beat me to the punch....again.

originally posted by: babybunnies
I've seen several school districts where their "school security patrol" has military style vehicles such as these.


I don't think most Americans do realize that and they should. A school district accepting military equipment implies that it will have people trained to maintain it and use it. The next step is using it to justify paying people to maintain it and justifying paying to train people to use it.

Totally wrong. Video games and movies condition kids to ignore Americans killing foreigners if they do anything at all. Having actual armed guards threatening them and pointing guns around will most certainly condition them to be afraid and obedient. Look around the the forum. There's already several stories of police brutality and interference in school.

I've had minimal trouble with cops and I'm frankly terrified when I see one. I saw one between me and my job today and got instantly nervous. I had nothing to fear. My town will be one of the last to see this stuff because we already obey. Ever since I was a kid I've seen everyone even old ladies swamped by minimum three cars for pretty much anything. The one tone I got in trouble in my town they literally sent fine cars to surround me completely. This pleasantville place hasn't seen real crime in ages but we have the kind of police force that you know had some good toys. There are cities with real problems nearby and our bloated arrogant police officers mostly harass people for minor things.

My sweet harmless mom (seriously the kind of mom where I bitch to my friends about her as a teen and they tell me to be nicer to her) was belittled and harassed and given a ticket. Her crime was going through a yellow light at an empty intersection. My mom, a cautious driver did what she taught me to do. If it's rainy or snowy never hard stop for a yellow cause you might lose control.

People are saying it's here now? It's been here in various subtle forms. We've all seen bullying. This is the result of it left without checks. The smart bullies run businesses or become politicians. The dumb bullies are our cops and soldiers. This is not a total rule but our society had made difficult and noble jobs too punishing for good hearted people. The lawyer driven market for malpractice and other forms of lawsuits were taken too far like everything else with greed. When you push a culture to base itself entirely around greed, this is the result.

Life might be the most complex game but if the goal is just to win inevitably there are winners and losers. We've clearly lost track of the point of the founding fathers. We were supposed to use Christian values as a moral guide, but apply reason and science to better humanity. At the start we had many splinters of Christianity here often experimenting with utopia. After ww2 we decided utopia was here and decided it was because we were the best. Motto of the US since then : capitalism is the only and best way. The fall of the Berlin Wall and Soviet Russia set this in stone. Any debate I've had with an American over politics or history that touches on types of government, i must concede capitalism's place as undisputed champ before I can even discuss alterations. Greed isn't considered bad for no reason and it's America's guiding star

Everyone knows it's broken but we can't admit it because it admits that we still don't have the answers on how people should be able to function politically and economically.

posted on Sep, 16 2014 @ 04:00 AM
link
Are they giving these military vehicles to the Southern border patrol? It seems like the Mexican border has a very legitimate use for such equipment.. as opposed to schools.

posted on Sep, 16 2014 @ 11:23 AM
link
When I was a teen we didn't have campus cops, we had an old security guard.
But as teens if our school had a hand-me-down Mine-Resistant Ambush Protected vehicle from the Pentagon.

we naughty kids would have been doing every thing we could to break that a hand-me-down Mine-Resistant Ambush Protected vehicle from the Pentagon.... why, because that's what kids do... only nowadays that'll get a kid shot by the cops or just run over by their new MRAP's.