Charged For Desecration Of Jesus Statue?


SEPTEMBER 10--A Pennsylvania teenager has been charged with desecrating a statue of Jesus after he posted Facebook photos that showed him simulating a sex act with the statue. According to State Police officials, the boy posed for the photos in late-July in front of Love In the Name of Christ, a Christian organization in Everett, the boy’s hometown. The teenager, who was not identified by cops, was charged yesterday with desecration of a venerated object, a misdemeanor. His case will be handled in juvenile court.

14 year old being stupid.
Is this really even against the law? Distasteful and immature yeah, but illegal?
Seems like a violation of freedom of speech or something.
He could probably claim it is art lol.


I see people do this to ronald mcdonald and other statues so whats so special here? If it were a statue of Zues or Santa would he have been charged? 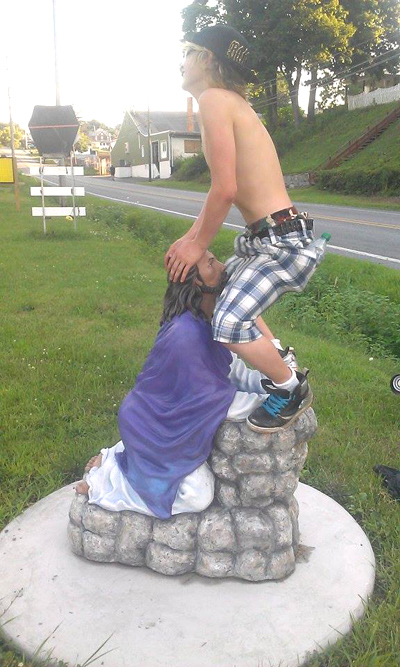 I saw this the other day. I just don't see a crime here and agree, this is covered under freedom of speech.
Though I think it lack maturity, this is NOT a crime.

As I said when I posted this to my fb page the other day...Only when one's sensibilities are smacking in the face will one truly know if they desire freedom for all.
edit on 15-9-2014 by Jakal26 because: (no reason given)

The only way I can see him being charged for anything is if he damaged it in some way. That can include urination otherwise this is a matter or his parents not big brother.

If no harm was caused to the statue there is absolutely no reason to have the police involved.

If he had done something where he exposed himself then that would be public indecency at the worst but even then it is a picture and if that was prosecutable I guess the cops need to start on the backlogs of videos out there.

This is freaking stupid it harmed no one.

A person commits a misdemeanor of the second degree if he:

(1) intentionally desecrates any public monument or structure, or place of worship or burial;

(2) intentionally desecrates any other object of veneration by the public or a substantial segment thereof in any public place; …

Definitions. — “Desecrate.” Defacing, damaging, polluting or otherwise physically mistreating in a way that the actor knows will outrage the sensibilities of persons likely to observe or discover the action.

posted on Sep, 15 2014 @ 12:36 AM
link
Ooops...Taking back what I said here because the poster above that I didn't see because I was typing proved otherwise.

Yes but wouldn't that only apply to state and federal public property? Churches are privately owned so I am not seeing where this law would come into play.

originally posted by: Jakal26
Ooops...Taking back what I said here because the poster above that I didn't see because I was typing proved otherwise.

HAHA by the looks of most of the American population I would say that ol ronald is much more venerated.

All praise be to the toxic big mac of prophecy

Praise be unto the holy nuggets.
Ummm...did someone say nuggets?

posted on Sep, 15 2014 @ 12:49 AM
link
a reply to: theyknowwhoyouare
It would seem to me that - if you go onto private property TO perform such an act, you've exceeded the bounds of decency and civility...and thus, civil misconduct could apply.
If this kid came into your yard, and had the same kind of photo taken of himself with your young daughter's face where the statue's face is in the incriminating photo...then, posted the photo online - having never forced said daughter to do anything...would you &/or your daughter feel/be violated?

Maybe something to consider...

If he did it to a mannequin in the middle of J.C. Penney store he'd probably be charged with something too.

Really, people don't want to see this kind of stuff in their community, and that's why laws are passed.

Freedom of speech? Give me a break. I suppose you would like it if he holds a burning flag in one hand at the same time?

When I was growing up stuff like this wasn't allowed no matter what your religion or lack of...

What if someone takes a pic of your wife and photoshops a donkey into the pic giving it to her good, and posts it online for the world to see. Freedom of speech? Art? I don't think so.

Let's call stuff what it is and put an end to this drivel about everyone ELSE's rights besides our own!

I will begrudgingly admit that what you have said here makes sense.

Again, I'm going to have to agree, to some extent.
The dumb part on his behalf, was posting it online.

When I was growing up, had I done this...my parents would have beat my ass into next week. Though, the cops would not have been involved. Welcome to the internet age, I guess.

My son had to deal with the consequences of 'egging' the Superintendent of Schools' home... Wasn't fun for any of us.
He wasn't the only one...and, some of the other perpetrators escaped unscathed (they didn't admit their participation - and he, and those that did admit...didn't rat on them). I don't think he's egged anyone-else's house since, though...
(WHEW!)

I just hope that the consequences aren't so severe that they ruin his life instead of instilling some decency. Maybe some community service, something like that. Probation seems to be a way just to get the "hook" in them for life. I've seen it happen too many times with kids that would have otherwise probably learned from their mistakes if showed the wrongs of their ways.

Maybe, in the end, that is why I was initially advocating something I am now backtracking on. (underplaying it)
But hey, at least I'm man enough to admit when I was wrong or just not thinking as clearly as I could have been...lol

posted on Sep, 15 2014 @ 01:12 AM
link
I'm gonna LMAO if he winds up in jail for more than 72 hours over this. Rest assured, he'll find out what it's like to be on the 'receiving' end of that position ... and I'm certain there are a couple of Christian correctional officers who will make sure of it.


I'm certain there are a couple of Christian correctional officers who will make sure of it.

And if they do such a thing defining themselves as "Christian" will need to go the way of the wind. You know, that pesky "turn the other cheek" thing.

I believe such a punish is a bit much for this. Jesus, man.

You know, that pesky "turn the other cheek" thing.

I was going in more for the, "Do unto others" bit.