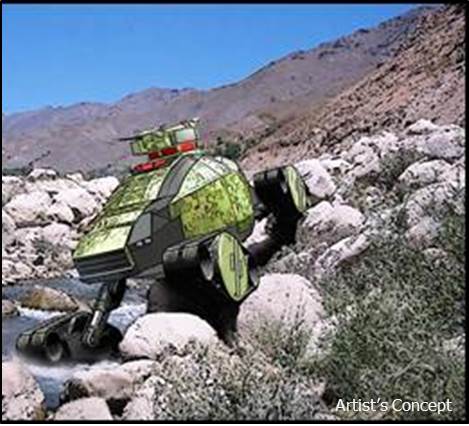 I have very little to say about this project. I mean it's a radical departure from heavy armor designs going back to WWI.
And I kid you not when I say they really want to get moving on this one... They want to award a contrat by April 2015 then develop GXV-T technologies over 24 months after initial awards.... the goal seems to have a working prototype within two years.
now that my friends is Dy-am fast for a military project of any kind....


GXV-T's goal is not to just improve or replace one particular vehicle - it's about breaking the 'more armor' paradigm and revolutionizing projection for all armored fighting vehicles," said Kevin Massey, DARPA program manager. Inspired by how X-plane programs have improved airfraft capabilities over the past 60 years, we plan to pursue groundbreaking fundamental research and development to help make future armored fighting vehicles significantly more mobile, effective, save and affordable."

Could be a beast in enough numbers. Depends on how much they will cost per tank.

posted on Sep, 13 2014 @ 04:17 PM
link
For awhile the US has been moving to create a lighter faster strike force. It would be to fast for heavy units that might out gun it to ever catch it and way out gun any lighter units that could catch it. This has been talked about for a long time as an early concept to deal with China launching an attack on Japan or Taiwan. These forces could land in China zip around hitting missle launcers, airfields, troops loading on invasion transports etc. They would out gun anything they would go after and and anything that could catch them. Heavy forces that could deal with them would lured out into the open to try and give chase and be hit with drones/airstrikes. Now I am that was an early concept and the US has of couse many concepts for dealing with Chinese agression. However the idea is sound. And could be used anywhere.

Yeah, this is the modern tank equivalent of the Graf Spee.

Still, these could be some rather effective pieces of hardware.

posted on Sep, 13 2014 @ 04:44 PM
link
The big step that DARPA's reaching for is unmanned/AKA robotic anything, that probably includes vehicles. It's internet war games for real... a stroke of a key from afar, Stuxnet is just a starter. Mind you, it costs a fecking fortune. All countries will soon need to comply if not already.

It would take the troops out of harms way and enable the tank to be smaller, lighter, faster, CHEAPER, and easier to move around in higher numbers. They wouldn't need logistical/support troops following closely behind so they could deploy further onto the battlefield and give new meaning to the concept of blitzkrieg. Design them to rearm/refuel using air-dropped supply caches and it opens up an entirely new combat strategy.

Realistically, there are few things a ground-based vehicle can do that can't be done more efficiently from the air so the need is limited.

originally posted by: smurfy
The big step that DARPA's reaching for is unmanned/AKA robotic anything, that probably includes vehicles. It's internet war games for real... a stroke of a key from afar, Stuxnet is just a starter. Mind you, it costs a fecking fortune. All countries will soon need to comply if not already.

I agree, drones of all sorts land, sea and air are the future. It's one of the only ways in the long run to match China's potential manpower advantage in any major conflict.

originally posted by: Q
a reply to: MrSpad

Yeah, this is the modern tank equivalent of the Graf Spee.
New tech, new application, old concept.
Still, these could be some rather effective pieces of hardware.

posted on Sep, 14 2014 @ 06:23 AM
link
The Sherman was a much lighter tank than their German counter parts *Easier to transport, easier to produce and easier to maintain* also much easier to go BOOM with the tank and it's crew flying to pieces when hit.


There has always been a trade off between mobility and armor.

The Sherman on the Western front were able to swamp the German tanks with numbers. If China is a future adversary then the US would need to seriously up their game in mass production because China's mass production capacity is presently beyond Americas. If the scenario is to swamp Chinese forces with huge numbers of these vehicles crawling all over the battlefield of the future.

I absolutely agree. In the age of the IED/VBIED, conventional crew-operated armored vehicles must certainly go the way of the dodo. The only vehicles we in the west have that can withstand even a medium-sized IED are the various MRAPs that are in service with the American forces. The main drawback of these vehicles is that in order to have a blast-redirecting under-surface, MRAPs are extremely top-heavy and prone to roll-overs in which the poor soul manning the machine-gun turret would often be cut in half, as MRAPs are so heavy that they just shear the turret right off the cupola. In a conventional armoured vehicle, such as the M1 Abrams, the over-pressures that are exerted on the flat bottom of the vehicle often cause them to be flipped end over end in the case of larger IED strikes. This is compounded by the fact that the crew compartment acts as a pressure vessel which is very unfortunate for anyone who happens to be inside one at the time. On the other hand, if you take personnel survivability out of the equation, it really gives TPTB carte-blanche as to the atrocities that could be made possible with little to no public backlash. For example, the majority of the public backlash against OIF and OEF was due to the rise in dead and wounded servicemen. If you take the body-count out of the equation, I am hard-pressed to believe that there would be any popular backlash that isn't economically motivated. After all, let's face it: Human beings are selfish creatures and will generally only speak out against wrongs if they are affected directly by them.

Very true. Lone Shermans didn't want anything to do with Panzers of just about any variant. Their only hope of success was pack tactics, i.e. while the Panzer was attending to a 'rabbit', several other Shermans or other TD/AT assets would hit simultaneously from different angles.

I don't think we want to get into a production war with China, just doesn't sound like a winning strategy. I'm still thinking that would be a next Gen gun on there, not something that can't penetrate mos TN modern MBT's. It has to pack a punch as well as being very mobile to work.