posted on Sep, 13 2014 @ 08:58 AM
link
The real title is:
Man Threatens Suicide With Knife, Police Respond With SWAT Team, Snipers and MRAP 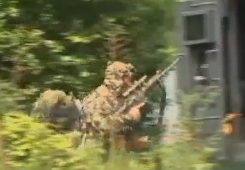 Aug 5, 2014
Muhlenberg, PA- In the small town of Muhlenberg, PA, a call to the local police about a man threatening suicide with a kitchen knife was met with by a highly militarized police response.
The police response to the suicide threat highlighted the increasing militarization of police across the US.
Residents of the home had already vacated the property when police arrived. According to police, the suicidal man was a frequent houseguest of the homeowners.
The police entered and cornered the man into a bedroom. The man then barricaded himself in the room. It was at this point that the Berks County Emergency Response Team was called in to take over.
Rather than de-escalate the situation using mental health professionals, the police doubled down on their high-pressure tactics and militarized response.
A man threatening to take his own life with a knife was reason enough to put into action a SWAT response, a sniper in a ghillie suit and an MRAP armored personnel carrier.
The response was more akin to that of a battlefield in Afghanistan then a mental health crisis in small town America. Sadly, this type of police response is becoming more and more frequent as the police state grows.
Later the police confirmed that the man had a history of mental illness.
Luckily, the man agreed to come out of the house prior to being killed by officers, such as what happened to Michael Blair in a very similar incident in Fort Bend, Texas earlier this year.
Blair was not so fortunate, as he was shot and killed by the officers responding to the call of him threatening suicide with a knife. 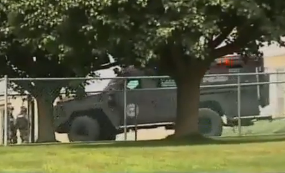 Do not watch this video unless you can handle it,
if you have to think about this then don't watch!


Well there you have it!
One, maybe two shots - justifiable!
HE UNLOADED WHAT APPEARS AN ENTIRE CLIP ON HIM!!!
Then handcuffed him!?!

Is this policing the public? Seriously?

Tell me, I can't be the only one that thinks this is nuts, AB

posted on Sep, 13 2014 @ 09:16 AM
link
This is despicable. How the hell can people trust getting help for their suicidal loved ones anymore? Can't call the authorities!


They did use a taser several times, and this guy wanted to die so he was either gonna kill himself or do a suicide by police. Looks like he chose the latter.

originally posted by: RoScoLaz4
a reply to: AnteBellum


Yup exactly what i thought.

Completely nonsensical logic, if anything they just made it easier for the man to get what he wanted, death. rather than doing what they should be doing which is preventing it.

there just arnt words to make that right.

That's ridiculous...I mean, between incapacitating and killing somebody makes a difference of 10 bullets..(I counted 11 shots!!)

This is getting out of control.

We are now being conditioned to expect a militarized police response for EVERY call/incident.

Forget about diplomacy, deescalation or 1 or 2 officers accompanying a counselor who could speak to the man as a fellow human being in hopes to actually try and help someone.

It was decades in the making, a nation at constant war since WW2. The unrelenting violence we've unleashed on foreign nations has finally come home.

Seems to be spreading like a virus or cancer.

Think maybe we need to reevaluate police, their role in society and the direction in which all of this is headed.

Why wasn't a training medical professional brought in to help this man. At the very least it would have been "cheaper". I hope these fools get fired.

posted on Sep, 13 2014 @ 09:32 AM
link
That video makes me wants to round up a posse and drive around murdering every LEO I see. Honestly. It may happen one day.

posted on Sep, 13 2014 @ 09:33 AM
link
Well I think I counted 11 shots, so you can't say the cop unloaded a magazine on the guy. How many times did the cop ask or demand that the guy drop the knife? More than eleven? Secondly the dead guy looked like he was stabbing himself a lot prior to the shooting. He was either possessed by the devil, seriously mentally disturbed, wanted suicide by cop, or was high on PCP.

When I get a new toy I want to play with it.

Replace all their toys with cameras. It's proven to work.

originally posted by: Mikeultra
Well I think I counted 11 shots, so you can't say the cop unloaded a magazine on the guy. How many times did the cop ask or demand that the guy drop the knife? More than eleven? Secondly the dead guy looked like he was stabbing himself a lot prior to the shooting. He was either possessed by the devil, seriously mentally disturbed, wanted suicide by cop, or was high on PCP.

Uhmmm...suicide by cop works better if you run at the officer with the knife not stabbing yourself. Stabbing yourself seems more like a cry for help and somehow I think this officer wasn't the correct person to handle this particular situation.

Smaller 9mm's hold from 7 rounds to 12 and in some areas number of rounds is limited, but I'm pretty sure that doesn't apply to police since they are allowed to drive around in armored vehicles with everything from assault weapons to grenades.

I can't tell what he is using in the video, hopefully one of the several handgun experts on ATS will enlighten us at some point.

Whether this guy was 'possessed by the devil', 'seriously mentally disturbed', 'wanted suicide by cop', or was 'high' makes no difference. If you look closely after the first shots were fired and he started to fall, how many bullets hit the top of his head or went into his back after he fell?

If you are religious you'd better tell your families not to call the police when you get possessed by the devil, call a priest instead. If you take drugs and have a bad trip, tell your friends don't call the police. If your child is threatening suicide, better think again before you call the cops. If you have a mentally disturbed loved one at home better find a good doctor that knows what pills to prescribe because if something happens and the police are called. . .

Frankly, I'm tired of hearing this argument!
edit on 9/13/2014 by AnteBellum because: (no reason given)

posted on Sep, 13 2014 @ 09:59 AM
link
a reply to: operation mindcrime
Just prior to the shooting, he did get up and advance towards the cop. That was after stabbing himself multiple times. He must have been in terrible pain and wanted to be shot. I do think 11 shots was excessive though. PCP will enable people to keep on going after a lot of shots however. Calling the cops in these situations should be a last resort because chances are it will end badly like this did.

posted on Sep, 13 2014 @ 10:03 AM
link
Uhhhh....you supposed to try and SAVE his life by hitting him with a Taser or other non-lethal weapon. This is a gross over-reaction and it has to be cooled down. This isn't America anymore.

Yeah I guess you're right, he did seem to approach the officer.

But the police officer's involvement was the equivalent of a firefighter showing up to a fire with a can of gasoline...

Any moron could have shot the fellow to death. One does not need a police person if the end result HAS to be a death. However, one would assume that calling the cops is the option which gives the best possible outcome for everyone's safety, and increasingly it seems as if that is not the case. I am appalled that no attempt was made by any of the officers present, to perform a wrist lock take down, or some other non-lethal close quarters manoeuvre to disarm and restrain the subject.

A person without a ranged weapon should never be shot to death, and a police officer should always be more prepared to risk their own life, than to take another. If not, they should not be doing the job.