posted on Sep, 12 2014 @ 09:30 PM
link
The E-8 saga has been an adventure in the last few years (and by few, I mean back to the early 2000s). One aircraft was removed from service after an inflight refueling accident that left holes in the wing, and almost resulted in the loss of the aircraft and crew. That leaves 16 aircraft in service.

Over 10 years ago, the plan was put forward to replace the TF33 engines currently in use with CFM56 engines used on the KC-135R model. Proponents said that the savings in fuel, and improvements in capability would pay for themselves, while opponents said that the cost of the upgrade wouldn't be equal to the improvements in capability. Despite attempts to get the program pushed through, it was eventually cancelled.

Now, in a new attempt to replace the J-STARS by 2022, the Air Force is looking at a business jet sized platform. Choices range from a 737-700 to a G550. Gulfstream has been flying the G550 with various possible configurations, including radars and on board systems for almost two years at their own expense. The G550 is the smallest platform they would use for the program.

The 737-700 has the advantage of already being used by the military as the C-40 transport, and is IFR certified already. Critics say that it's too big, but it's only about 10 feet longer than the G550, although the fuselage is much wider. Interestingly this puts Boeing on the other side of the argument in the KC-X program, in which they argued that the extra size of the Airbus entry would drive costs up too much. Now they have to argue that it's to the Air Force's advantage to have a larger platform that can hold more work stations, and has room to expand.

The program is expected to cost $4.3B to buy 17 aircraft.

Sometimes you have to spend money to save money.

This has been a theme for the U.S. Air Force’s on-again, off-again desire to replace its air-ground surveillance fleet for years. And this philosophy continues to bolster the service’s newest fleet replacement plan.

The discussion started more than a decade ago with a defunct and costly plan to reengine the E-8C Joint Surveillance Target Attack Radar System (Joint Stars or Jstars) aircraft; 16 of the four-engine Boeing 707s are now in inventory after one was removed from the fleet due to an inflight refueling incident. Proponents hailed the merits of more efficient propulsion; opponents said the cost was too great to justify the capability improvements. Joint Stars manufacturer Northrop Grumman and engine maker Pratt & Whitney fought for years to maintain congressional interest. But the project eventually cratered due to lack of interest by the Air Force, which funded higher-priority projects.

This one will be interesting to see play out. Who do you think has the upper hand, Gulfstream or Boeing?

posted on Sep, 12 2014 @ 09:47 PM
link
Alot of the cost is going to go to the electronic systems in the end regardless of airframe. I think G550 is a nice choice. Reasonable speed and approximately the same endurance as the old 707 (though no inflight refueling could be a limiter) for a price half that of a 767. 767 endurance is roughly the same. It'll burn a lot less fuel than the bigger airframes. It'll cost almost twice as much per hour to go with a 767. I suppose you could argue for commonality with the KC-46 and the supply chain already being in place and not needing to duplicate it for a new aircraft as saving money if they go that route.

Just more "Pentagon Wars" type BS. This really pisses me off. Millions and Billions spent on programs that never seem to get of the ground or in the field. All because of in-fighting and lobbyists.

I have a relative who is working on the KC-X program and he's quite pissed about all this politics as well. Oh, he's getting a paycheck from Boeing, but the program is pretty much stagnant which does not suit him at all.

Whatever happened to build it, test it and field it (or not)?

Honestly, I see either the G550, or the Challenger Global Express getting it with the Sentinel that they sold to the UK.

The KC-X program isn't going badly. They hit a snag that pushed the first flight back to November of next year, but RAA is still set for August of 2017 with 18 aircraft delivered. There have been a few issues with the program, but nothing really major has cropped up, and the CDR has been completed already. The first flight test articles are to be delivered late this year, or Spring of next year and Iron Bird testing should start this year.

My relative also had a large hand in the development of the 777, which was easy peesy according to him then it is when dealing with the Pentagon.

This time they really are minor. The biggest problem so far is the current one. They had to add secondary and tertiary redundancy to the systems, which isn't required on a civilian version of the 767. When they did, they didn't place the bundles far enough apart, or put enough shielding into some of them. It's pushed first flight from June to the end of November because they have to replace the bundles.

They are setting up pre readied bundles so it's just a matter of yanking the equipment to get to them, then putting the readied bundles in place. There was a minor design change required in the CDR, but since it's a fixed price contract Boeing is being careful with the design and working on it.

It looks like the Air Force wants to drop the mission crew from 18 to 10 plus one floating crew member, in addition to pilot and copilot. 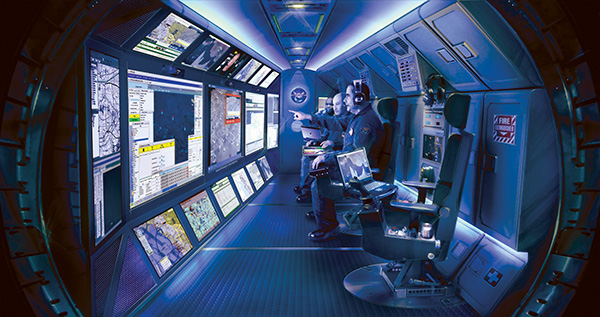 Yeah it really is. Be interesting to see how they fit that into a bizjet.

posted on Sep, 18 2014 @ 11:05 PM
link
Considering that the 737 is already in use in a variety of roles such as the C-40, P-8 Poseidon and E-7 Wedgetail which is itself based on the 737-700 fuselage they have mooted for one possible E-8 replacement solution, and contains the same same number of workstations they want to fit in, (10, down from 16) I cant see why it isn't seen as a natural replacement for the E-8. There is the benefit of not being an orphan airframe or at best a small pool of them if they choose a business jet solution, for one. Plus some equipment that is common will already be flight qualified.