posted on Sep, 12 2014 @ 11:33 AM
link
Some recipients in a $1 million contest have chosen anonymity due to fear of a gun rights-fueled backlash 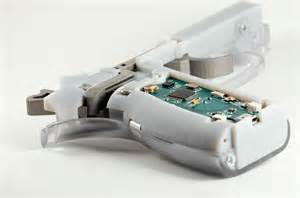 Some recipients of a high-profile contest for "smart gun" designs are refusing to allow themselves to be announced publicly, The Verge has learned, for fear of a backlash from gun rights activists.

A smart gun is a computer-enhanced weapon that authenticates users before allowing them to shoot. Smart guns may rely on biometric data such as a fingerprint, voice print, or the unique way the user grips the gun. They can also require a password or the proximity of another device, such as a wristband.

Proponents say implementing this technology will decrease gun violence, especially of the type that involves children getting ahold of their parents' guns.


The Foundation received more than 200 applications, and by June it had selected 15 winners. But so far, only one winner has been announced: 17-year-old Kai Kloepfer, who designed a fingerprint scanner that fits on the handle of a gun and requires user authentication in order to fire. Kloepfer was awarded $50,000, which was announced yesterday.

More winners will be announced, the Foundation says, but some have asked that their names be withheld because of the controversy surrounding the issue.

"All the grantees have been selected, but as you can imagine they are at varying degrees of comfort with public exposure," a representative for the Smart Tech Foundation told The Verge. "Some have asked to remain almost anonymous because of the negative backlash they may face. So we will be announcing grantees on a rolling basis in an effort to protect some innovators and highlight others."


Back in May, a Maryland gun store announced it would begin stocking the Armatix iP1, which only fires if it’s within 10 inches of its companion iW1 watch (presumably on the owner’s wrist). It can also be disabled with a timer or a PIN code.

The backlash was immediate. The owner received a flood of complaints, angry rants, calls to boycott his shop, and even two death threats. Within 24 hours, he announced that the shop would no longer stock the smart gun.

Gun lovers are afraid the government will require guns to have this kind of technology, which they feel would encroach on their rights. Smart guns introduce an element that could fail when you need it most, opponents say, and they may encourage states to collect biometric data on all gun owners. "Gun enthusiasts would resist this technology until it was cold dead hand gun prying time," writes the blog The Truth About Guns.

So fellow 2nd amendment supporters what do you think?

Personally, I don't see why this technology can't co-exist along with models we have had, some for centuries now. I understand the debate and to a great degree am very sympathetic to it, but it is the future of legislation that bothers me, not the technology behind it and/or being used to further an agenda.
Though I have issue with the reliability on some of these items, more parts, more chance of misfire, their still is a benefit to those that require a more secure system to ensure children don't get injured. Prison guards also comes to mind as these weapons can easily be brought into secure areas without potential risks but I feel the authenticating process will have to be a bit more iron clad for me to feel trusting on that also.

So what do you think or ?

It reminds me of the weapons found in the cyberpunk2020 rpg

Give it a look and see for yourself

Think about it. Everyone gets a gun that is jackedinto your brain allowing you to hold the trigger but only fire a eound when the target is in clear site

Yes I want one

Yes I think there is a place for these as you mentioned before such as law enforcement. How would things at Ferguson have gone down if the threat or excuse of the officers weapon had been gone for. The gun owner with kids that wants to keep one by his bed. I would interested in one of those because I remember when I was a kid that no matter where my dad put his or even in the safe I found a way to get to them and took them out more than a few times shooting. Like father like son.

It is a shame people feel the need to threaten others because of this. Seems many were not secure with the free market. Now as far as legislation goes that is a battle that must be fought with votes and courts.

I could just see the password model, my wife can't even remember her password while casually sitting on the couch loging into her laptop, much less under stress during a crisis. The one already for sale uses bluetooth for communicating between user and firearm, not a good idea IMO the radio signal can be blocked by anyone from the LEO's to government and hackers as well. Finger prints with wet hands wouldn't work either. If there was technology that could be used and not triggered remotely I might consider but for now I don't see it. I will stick with regular old single stack 1911 with no electronics.

As long as politicians want to play gun control games these type guns need to remain unavailable. There's a reason for the backlash against these weapons.


A gun that fires only in the hands of its owner isn't science fiction anymore. A so-called smart gun is already on sale in Europe. But you won't find it on store shelves in this country — in part because of an obscure New Jersey law that's had unintended consequences for the rest of the nation.

Basically, the Childproof Handgun Law of 2002 says that once "personalized handguns are available" anywhere in the country, all handguns sold in New Jersey must be smart guns within 30 months.
New Jersey Law That's Kept Smart Guns Off Shelves Nationwide

posted on Sep, 12 2014 @ 12:09 PM
link
Smart gun, sounds good until you think about it thoroughly. A computerized gun can be jammed and made not to work when needed too.

I could see how this might be used by Governments to basically disarm the public.

You have a group with Smart Arms that want to overthrow a Government. All the Government has to do is throw a "kill switch" and all of their guns are useless. Don't try to tell me there wouldn't be this kinda of secret option available, I'm pretty sure that would be part of the package, the ability to just power down weapons in an area.

Even if this were to work.....Still wouldn't stop mass Shootings, unless the gun was broadcasting it's location and it's firing.

Crazy people would still be able to have a smart gun and kill lots of people.

posted on Sep, 12 2014 @ 12:15 PM
link
Yeah...no thanks! Guns work fine just the way they are. I don't like the idea of it all being governed by electronics because someone could manipulate it and cause you serious problems. But these anti-gun nuts will keep trying, I guess......

posted on Sep, 12 2014 @ 12:17 PM
link
Personally, I wouldn't get one. I am of the KISS mentality, too many things that could go wrong with the gun, that I couldn't service myself and fix in a pinch.

"hey Jim"
"yeah"
"I left my piece with the wife this morning, you got that new toy yesterday, let me use your service revolver?"

"Sure thing, just don't shoot anyone today, if you can help it!"

originally posted by: Fylgje
Yeah...no thanks! Guns work fine just the way they are. I don't like the idea of it all being governed by electronics because someone could manipulate it and cause you serious problems. But these anti-gun nuts will keep trying, I guess......


Yah, thanks but NO THANKS.

Its not "gun control", its people control.

Lets be honest, the government fears an armed public. Their goal is to incrementally strip us of our 2A rights and this is just another step towards that goal.

Like our phones, the "authorities" will eventually be able to control the functionality of the weapon, being able to turn it on or off at their whim.

Like everything else in life, safety is in the user.

Keep your people control/anti-freedom technology away from our 2A rights.

It's all well and good until you realize you forgot to charge the battery in your gun that day that you really, really needed it ...

I don't understand the death threats and such, though I get the concerns about the legal meddling that will almost certainly place, like the NJ law citation above that potentially makes the technology mandatory.

If it were made available, few would choose the extra costs and downside, so no doubt there'd be jurisdictions that made the technology mandatory.

I feel that even if they were to implement "smart" gun technology, and make it a requirement of all firearms, what is to stop them from doing weapon seizures nation wide? Then after they manage to collect the bulk of "dumb" guns, whats to say they can't access all smart guns and disable them?

Anything can happen in reality.

posted on Sep, 12 2014 @ 01:44 PM
link
I wonder why the government would want every gun to have a kill switch that they have the button to?
Hmmmmm?
Nope.
Nothin fishy bout that.
no sir.

It's laws like this that make me not want the technology then.
It's exactly what I thought another tool used to get around the 2ndA. They wonder why people are PO'd and nervous about these new things, they haven't even come out and they already are rewriting the laws.
Why can't they treat other issues with such haste, care and thoroughness and what adds insult to injury is how hard it is already to get a gun in NJ. Almost every gun shop I've been to has been shut down now.

Exactly...a single EMP shockwave would make all these guns useless. We wouldnt have infrastructure and on top of that we wouldnt have a working weapon.

How about you solve world hunger or political corruption or release a new form of energy production. Cure illness....

Personally, I don't see why this technology can't co-exist along with models we have had, some for centuries now.

Guns are a religion to many. When I say religion, I mean it carries with it a mindset and code of conduct that affects all aspects of life. The code of conduct demands that you should be ready to die for "the cause".

Near me, there is a gun range in an office building. The office building has other enterprises including restaurant and children's day care. So one of the offices adjacent to the gun range is getting remodeled. The city engineer does a series of HazMat tests and sure enough, the lead dust from the gun range has infiltrated the whole of the building though the ventilation system and the levels of lead are 100x the limit. The daycare and restaurant are immediately closed. But a strange thing happened when they tried to closed the gun range. A bunch of yahoo's considered it a Constitutional crisis and were on the verge of fighting an armed battle with local police. They demanded the right to keep the range open during the clean-up phase --even with the lead exposure risks.