Why starting lines of 200m race in curve shape? 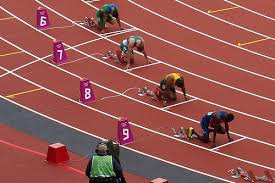 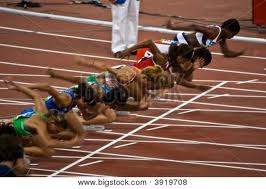 this is not rocket science

as orangetom would say - public education ?

OP think about circles. A bigger circle is longer (if you straighten it out) than a smaller circle.

So the closer you get to the inside circle of a round track the shorter the actual distance. It's a smaller circle (and less of a distance) the closer you move in.

Instead of having everyone run in a straight line, the people running in the lanes are staggered so they have to run the same distance. Those on the outside lanes get what looks like a head start, but only because they have to run a longer circle.

Not sure if I'm being trolled here, but I'll give you the benefit of the doubt.

Good on you Domo, maybe I'm broadcasting my ignorance but I honestly didn't know either.

originally posted by: Domo1
a reply to: ignorant_ape
OP think about circles. A bigger circle is longer (if you straighten it out) than a smaller circle.

Oh thanks Your's one sentence answer really helped me....

That's why elephants are bigger than the moon, isn't it?

And why the sun smells like lemons on Sundays and Thursdays.

originally posted by: AlphaHawk
That's why elephants are bigger than the moon, isn't it?
And why the sun smells like lemons on Sundays and Thursdays.

Its merely to do with the shape of the track however I've often wondered if they were able to run 200m in a straight line that the times would be quicker? Running on a bend puts additional stresses on the joints and body.

posted on Sep, 12 2014 @ 01:29 PM
link
a reply to: Domo1
Good on you for explaining it in a calm, respectful way so that OP could get it! Hopefully, a mod will see your post and award you points for your kindness and willingness to teach somebody something instead of insulting them

posted on Sep, 12 2014 @ 02:08 PM
link
They would start straight across if they could run the whole race straight in a line, but since the track is an oval, the person in the outer lane would run farther than 200m is he or she started in the same line with the person on the inside of the oval.

I ran track into college.

Whenever you could in a longer leg relay, you wanted to grab the lead so that your later legs could always run on the inside of the oval and force the other runners to move to the outside to pass them. It meant those other runners had to run just a bit further to go around you.

Yep, that's 9 minutes and 30 seconds of strategy for a 200m race. There is more strategy to it than most people realize. There is a even a correct way to place your starting blocks.
edit on 12-9-2014 by ketsuko because: (no reason given)