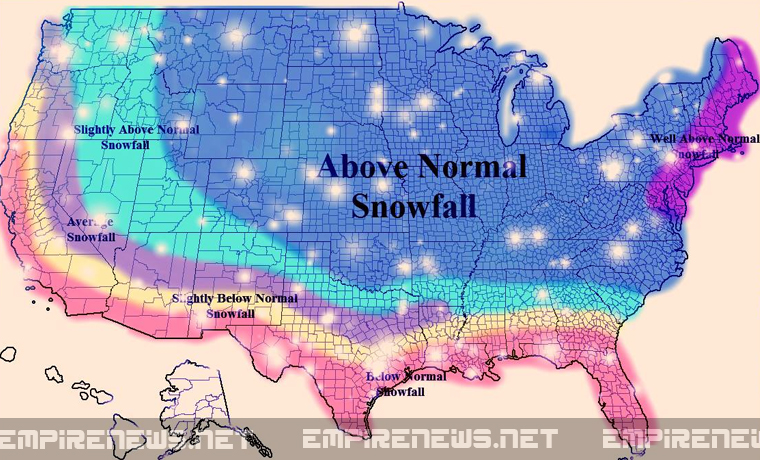 “For the sake of comparison to the past winter, lets say that your area received a total of twenty inches of accumulative snow for the season. Because this year the snowfall is predicted to start by the end of September or the beginning of October, you can expect to multiply that number by up to five, ten, maybe even twenty times in some areas. In the worst zones, you could see 50 times the amount of snow you’ve had in the past. This is the type of winter the American public needs to prepare for. Several meteorologists are saying not to buy into what the models are showing. I can tell you from forty years of scientific weather research, they are doing you a disservice,” Dr. Scvediok told the Associated Press on Friday. “The Northeast, Ohio Valley, and Midwestern states will definitely get hit the hardest.”

Get ready for it!
Last year up here in Minnesota we had record snowfalls and heavy winds and massively cold temperatures in the -40 to -50f range.
With an el nino usually the temps stay milder here,and I hope it holds true this year because I don't want to go through another repeat of the cold last year, however, I do love the snow....sort of.

Here is a picture of our apartment building parking garage last year covered in a snow drift that was 15 feet high and packed heavy. 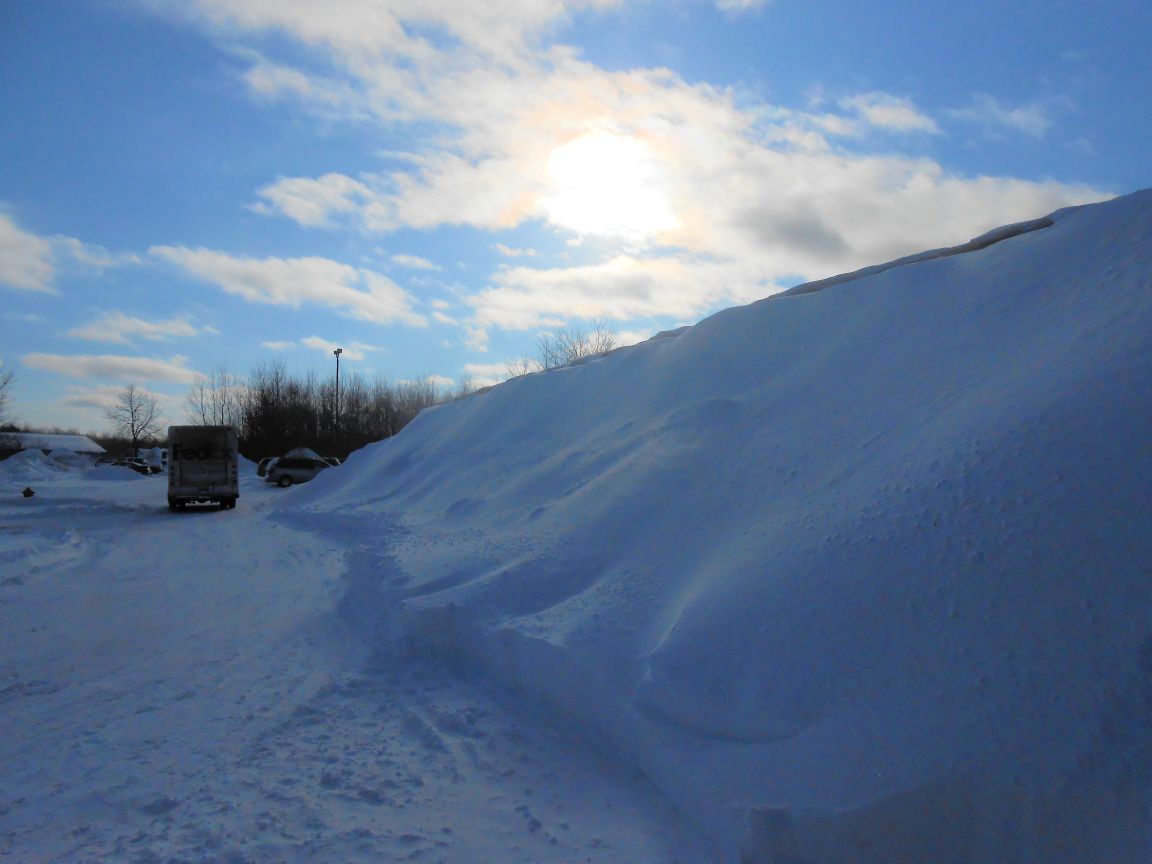 There was A LOT of snow last year, if we get anywhere near what this article is suggesting,
this is going to be one seriously hard year for a lot of people.

A little bit more from the news article:

Edward F. Blankenbaker, Senior Administrator of Meteorologists, also told the media that this will be a once-in-a-lifetime kind of snowy winter.

“Pretty much everyone will see snow like they never have in their lives. Most younger people don’t even know what an actual blizzard looks like, but by the end of March, they will be seasoned survivalists,” Blankenbaker said. “Everyone needs to make sure they have their weather emergency kits prepared and ready to go. There will undoubtedly be mass power outages, which along with freezing temperatures and enough snowfall to immobilize entire cities, will most likely, and unfortunately, be a very dangerous recipe. Safety always comes first and the time to prepare is right now.”

I predicted that here:


I've been predicting it all summer. This winter will be the biggest blizzard that anyone in this lifetime has yet to see, easily besting the one in 1978.

It's coming, and it's already brewing.

Would you have a link? Thx

posted on Sep, 11 2014 @ 09:24 PM
link
I found it here on empirenews for anyone who wants the link
empirenews.net... teorologists-predict-record-shattering-snowfalls-coming-soon-bread-milk-prices-expected-to-soar/

posted on Sep, 11 2014 @ 09:26 PM
link
This is interesting, I have been thinking about this for a while, and noticing the lack of Chemtrails in my area, and also now that we had that thread about the data being lost, something about Global Warming Models or something like that and the scientists had lied about the info.

originally posted by: halfpint0701
The article is from Empire News....a satirical site.

I was actually stoked. Whenever it snows heavy (very rare around here) I jump in the car and go for a joyride.

Are you privy to something we don't know about?
Can you enlighten us with your prophetic forecast _boneZ_? Lol

I nearly threw my hip out last winter and if it's going to get worse I need to start flirting with the neighborhood shovel brigade. I always knew there was a reason I kept my ex around, well other then the kids.

Very small generators are cheap. Just a little tiny 12V one that does not guzzle fuel.

A couple of the larger 12Volt batteries usually fitted to 4 wheel drives.

Now, what you need then is a 12V electric blanket, a 12V to 5V converter and several pairs of cheap heated gloves and slippers that plug into your laptop. Cut off the lead and connect them to the 5V supply.

In a real SHTF, you will need these.

Stock up on lots of honey and sugar.

A 12V kettle would also be very good.

I'm still predicting it, even though someone has made it a satire.

I've seen everything thing from: It will be just like last winter to It will be much more mild to It's going to be a LOT worst than last winter.

Here is what I tell everyone: prepare for the worst. If it doesn't happen, that's okay, at least you were ready.

What you DO NOT want to happen is to blow it off, and get caught with your pants down! That would be the worst you could do. So stock up on water, batteries, ways to keep warm that do not require electricity.
Check all your plumbing and insulation if it get's to or below freezing in your areas.

Think about using plastic on your windows to help keep heat in. Or at least keep the materials handy so that if you NEED to on short notice, you can.

Think about your pets if they stay outside mostly.

Stock up on canned goods for food.

Again: doesn't hurt to be prepared just in case.

Ouch, sorry about that!
First time I had heard of Empire news.

After the frigid, bitterly cold, and snow-filled winter last year, many of you are wondering just what this winter might bring. Could it possibly be as bad as last?

According to the 2015 edition of the Farmers’ Almanac, the winter of 2014–15 will see below-normal temperatures for about three-quarters of the nation. A large zone of very cold temperatures will be found from east of the Continental Divide east to the Appalachians. The most frigid temperatures will be found from the Northern Plains into the Great Lakes. The coldest outbreak of the season will come during the final week of January into the beginning of February, when frigid arctic air drops temperatures across the Northern Plains to perhaps 40 below zero. As the frigid air blows across the Great Lakes, snow showers and squalls will drop heavy amounts of snow to the lee of the Lakes.

No region will see prolonged spells of above-normal temperatures; only near the West and East Coasts will temperatures average close to normal.

Over the eastern third of the country, we are expecting an active storm track with a number of storms delivering copious amounts of snow and rain. Near-normal precipitation is expected for the Pacific Northwest, the Southwest States, and Northern Plains, while below-normal precipitation values are forecast for the Southwest States as well as the Upper Midwest and the Great Lakes. The Central and Southern Plains are expected to receive above-average precipitation.

We are “red flagging” the first 10 days of January and the first week of February along the Atlantic Seaboard for active wintry weather featuring bouts of heavy precipitation and strong winds. Another red flag timeframe for widespread wintry conditions is the middle part of March from the nation’s midsection to the East Coast.

Potential El Niño is an Uncertain Element
As we were putting the finishing touches on this year’s long-range projections, the National Oceanic Atmospheric and Administration issued an official El Niño watch. An El Niño is a warming of the central Pacific once every few years, from a combination of wind and waves in the tropics. It shakes up climate around the world, changing rain and temperature patterns. An El Niño could result in more rain this winter for drought-stricken California and Southern States, and a milder winter for the nation’s frigid northern tier. El Niños are usually strongest from December to April, but there’s no guarantee that we will see one this winter. We’ll just have to wait and see, but in the mean time, all of us at the Farmers’ Almanac suggest you stock up on firewood, sweaters, and hot cocoa. It certainly looks like another long winter of shivery and shovelry is on tap.

Oh be fair, its been hot and dry here in Vancouver all summer! Yes it usually does rain, but its been quite dry the last few summers. You don't want it to snow here They cant drive in it!

Anyways...from my own observations...leaves began to turn in N. Georgia about 2 weeks ago, subtle, but there. Canada geese coming in like crazy. Crows already flocking together. Transient hummers already coming through and emptying the feeder every other day, typically that happens in early October. Spiders moved inside two weeks ago. Veggie garden crapped out, usually goes through mid October.

All anecdotal from my garden notes and all the same as last year (which was a tough winter).....but this year it's two weeks to one month earlier than even last year.

Yeah, the leaves on some trees started dying and falling off back in July and early August. I can't recall ever seeing leaves falling off trees that early in the year.


yah, noticed the leaves myself here in SC, near Augusta, GA. About 2 weeks ago or so, a lot of leaves on many of the oaks have started to brown and fall off. About a month or so earlier than normal for around here.

Hickory nuts husks have been a lot thicker this year too.