"EcoFarm | Food of the future"


"EcoFarm | Food of the future"

EcoFarm is based on Aquaponics technique and is able to grow herbs and cherry tomatoes fertilizing them with the waste of a fish.


Get ready to grow your favorite herbs and spices at home and with your support we can make it available for everyone.

We believe that local farming is the first step to deliver fresh tasty fruits and vegetables. With this goal in mind, Ecobird has started to develop a product line based on Aquaponics.

Aquaponics is a food production system that combines conventional aquaculture (raising aquatic animals in tanks) with hydroponics (cultivating plants in water) in a symbiotic environment where the waste of the fish is used as a natural fertilizer and the plants clean the water.

3 reasons why you should have the EcoFarm

1 ) You can grow basil, thyme or other herbs without worrying whether the plants have enough water or nutrients.

2 ) Grow healthy, tasty and Ecological food in your own kitchen

3 ) It is also a self-cleaning fish tank 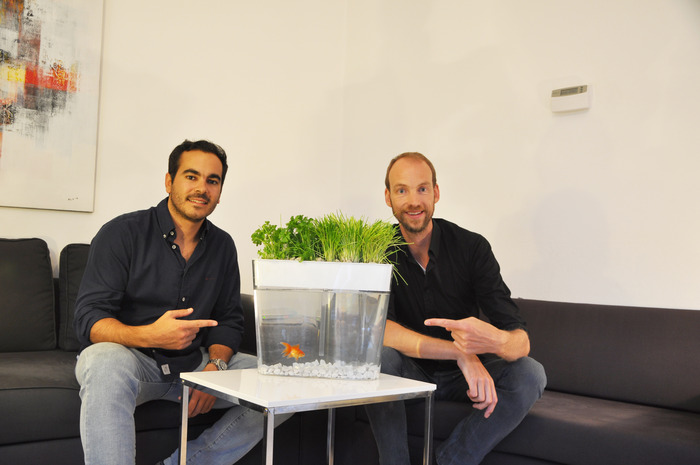 So basically it is a fish tank with a grow bed placed above it, and the plants can grow because of the water and nutrients the waste of the fish is used as a natural fertilizer and the plants clean the water.
As long as you feed the fish (or you go ahead and add an automatic fish feeder ).

Link to the Kickstarter page.
edit on 11-9-2014 by AnonymousWitness because: (no reason given)

Disney has a huge one of these and they even use the food in their restaurants.

That's awesome! And now maybe soon available in a kit for all of us.

I mean, the concept is good, but it's not simple as this makes it out to be. You still need to add an additional chemical component to actually break down the fish waste into usable fertilizer. Further, you (obviously) still need to feed the fish.

If you look strictly at inputs and outputs, the only way this actually makes economic sense is if the cost of the fish food plus the chemical catalyst comes out to be less than regular plant fertilizer, which by my calculations, at least where I'm from, is not true.

You also need a reservoir of considerable size, or the water chemistry will change too rapidly for the fish to survive. These systems typically use ebb and flow tables, which while effective (and very cool to watch work), are not the most ideal hydroponic system.

Personally, I would use an aquaponic system in something like a farm-to-table restaurant, where you could literally show people that their food is being grown and harvested fresh before their eyes, and charge them a premium to cover your extra costs.

As for actual food production, I believe hydroponics itself is the way to go. Aquaponics on a massive scale would probably work out, but to put one in everyone's home or yard, the amount of inefficiency and energy waste would be staggering.

posted on Sep, 11 2014 @ 05:04 PM
link
Aquaponics units in that size are ludicrous. And after years of having fish tanks, I can guarantee it won't stay clean without additional work, nor will the water stay crystal clear like that. You'd be lucky to get a pinch of greens off it once a week.

The large size AP units, though, are a real game changer for the agricultural business. Properly balanced you shouldn't need to add any chemicals except perhaps some trace minerals on rare occasions, and if you want to obviate having to buy fish food, you can grow both duckweed and worms (vermiculture, off various inputs from household food scraps to coffee grounds and brewery leavings), and feed those to the fish, making a complete loop of nutrients.

They use a reported 5% of the water of regular dirt farming and you don't need good land, or really any land at all; a patio will suffice for a small unit and most suburban houses have enough backyard to produce a living wage for a family; there's a couple near me in southern Oregon that are selling 1200 head of greens a week alone, at $1 a head wholesale and $2 a head retail; do the math.

Properly set up the system is organic and thus the produce is worth more than the insecticided, chemically fertilized kind.

I would encourage anyone who could use a new career to look into it; there's a wealth of info on line about it now and it could be adapted to any climate.

But that Kickstarter thing is ridiculous and it's not the first time someone tried that. That lone goldfish isn't going to produce enough waste fertilizer to feed anything more than the algae that will naturally grow in the tank.