How low is "under the radar"

I was just wondering if any of you know how low a plane has to fly to be flying under the radar, as in, not visible on radars?
The plane I have in mind is the Swedish JAS Gripen/phoenix.

All day I have seen these fly over our house like really low, and they usually fly at what I would think is "standard" altitude. My guess would be that today they have been flying about 70-150 meter above ground. Flying low is not something I have never ever seen before, but I have never seen them make so many flybys over our house this low.

Im not speculating why they have been doing this all day.

posted on Sep, 11 2014 @ 12:20 PM
link
Basically it's line of sight.
The curve of the earth blocks radar at a distance and decreases are you get closer to the source.
Terrain such as mountains blocks signals to.

As mentioned, the radar horizon (slightly farther than the visual horizon) and terrain masking both play big roles. In general, the lower the better. Unless you hiccup and plow a new field.
With tensions rising, I suspect most of Europe will be hearing "the sound of freedom" more often for awhile.

posted on Sep, 11 2014 @ 12:27 PM
link
There is nap of the earth flying which is using terrain such as hills and mountains to hide behind and there is hiding in ground clutter at usually 200ft or less. Some military jets have automatic terrain following at 200ft or less.

posted on Sep, 11 2014 @ 12:30 PM
link
So from the answers, I'm gathering it's generally very low and essentially following the terrain?

JimTSpock: I often wondered if there were aircraft with that capability.
edit on 11-9-2014 by Yeahkeepwatchingme because: (no reason given)

posted on Sep, 11 2014 @ 12:32 PM
link
Del pretty much nailed it but I had to chime in to say WHAT A LUCKY GUY YOU ARE getting to see those up close. The Swedish fighters are some of my favorite planes, especially the Draken, its just wicked looking. Do you have to stop and let the occasional Gripen taxi down your freeway/interstate?

originally posted by: _Del_
a reply to: Nettlas

As mentioned, the radar horizon (slightly farther than the visual horizon) and terrain masking both play big roles. In general, the lower the better. Unless you hiccup and plow a new field.
With tensions rising, I suspect most of Europe will be hearing "the sound of freedom" more often for awhile.


This is most likely the reason.
Though I'm jealous of you... for getting to see these baby's...
It would seem that the current situations are a draw back.

And to those who think I am lucky to see them every day, well, it is pretty cool but it can also be a bit irritating from time to time.

No, I dont get to see them tax out on the highway or anything like that. I live on a small Island with no highway. It just happens to be that my village is right under their "air highway".

I will try to catch them on a videocamera if I can and post it here for you.

It depends on the system, the topography and the local regulations which in times of heightened tension may be lifted.
Typically a Naval radar system which spot's ships or even a civil maritime system is down to a few feet with wave's causing the main interference and that is the point a radar system is looking for return signals and waves at sea cause sporadic returns that can cause interferrance, a real problem for human operators but no so much for computerised systems that can process the bulk of that data and look for regular sustained returns, so in that case 1 to six feet is the probably basement of the system.
On land a whole other range of problems occure and topography, construction limit the range of military radar at lower altitude's and other natural deviation in the natural horizon also limit that lowest altitude, this is why the old Tomohawk cruise missiles which was designed to exploit this weakness used a down facing topographic radar to navigate an internal satelite obtained topographical map to there target, even if they were detected they would be lost just as quickly as they followed natural ravines etc to there target.
Typically though civil aviation radar has a much higher starting altitude
During WW2 both sides tried to exploit this weakness in there adversaries radar systems and after the war the new antagonists of the east and west tried to developt this flaw out of there systems, military radar really is a different beast to civil radar and that is why.

posted on Sep, 11 2014 @ 02:31 PM
link
Today must be a good day for low test flights, showing off or what ever the case may be. I just took a video of a couple of F-16's flying pretty dang low over a small town in Ohio a little bit ago. Was pretty neat to watch, although they could have picked a different day

posted on Sep, 11 2014 @ 02:42 PM
link
Always remember a guy i used to work with and his cousin was in the RAF and one day they was doing some joint drills and the american pilots were saying they was going low till some RAF plane went about 50 feet barely missing the tree tops and showed them what low level actually was

I would imagine that was a Tornado pilot, great for putting a part in the hair.

How about an airborne radar systems?

originally posted by: Sammamishman
a reply to: LABTECH767

How about an airborne radar systems?

Very good point, they are suseptible to other problems but overall have several major advantage's such as altitude allowing ground reflecton of near by terrain recesses taht are normally blocked entirely to surface radar systems, you are right this can pick up rapid moving low altitude target's so though there footprint tend's to be smaller when they are operated tandem with other airborne radar systems, overlapping and maximising coverage the overall data coverage would easily allow detection of such target's and partially at least closes this window of oportunity, you know I completely forgot about this a very well thought out and astute question.

Of course traditionally this would be prohibitively expensive with scores of Awacs covering a relatively small area of rugged terrain and topographical constraints put on how many you would need for an area but with the advent of drone systems this and Lidar can perform the same task at a fraction of the overall cost though the initial overlay is still huge.

Think of Radar like light (which Lidar actually is) and taking a torch in a dark room shine it around, what you can not see it what is beyond the power of your torch or is obstructed from the direct source of the light and this actually pertains exactly to Radar and Lidar and it the best analogy I can draw, that is all Sonar is as well though it uses sound waves instead, in the case of the torch your eye's are the reciever recieving the light bounced off the objects and your torch is the transmittler procucing the signal that you are reading the bounce back reflection of, this best describe's an active system, in sonar passibe sonar can work as well and in light passive light detection is also possible but radar is a little harder though there are passive radar systems.
edit on 11-9-2014 by LABTECH767 because: (no reason given)

posted on Sep, 12 2014 @ 01:47 AM
link
With the line of sight thing, I remember in water survival class that we humans can see at sea level 14 miles before the curvature of the earth blocks anything else. So if your flying at 15 miles from a radar and very low altitude they probably can't see you.

posted on Sep, 12 2014 @ 09:18 AM
link
A very rough estimate (and we're ignoring a lot of variables like signal strength, terrain masking, ground clutter, refractive indices, etc) can be derived from the Pythagorean theorum. If we measure the distance to the horizon from one observer we can use a simple right triangle because the horizon is a tangent to the earth's surface. Here's a nifty diagram I shamelessly stole from Bad Astronomy: 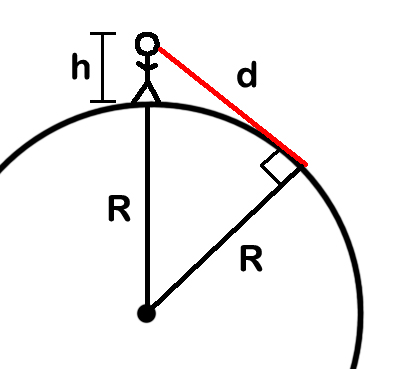 Try being out and about in Scotland up on the hills, was coming up the A9 and something caught my eye in the gully at the side of the road and here are a pair of Tornado's flat out at about 25' 30' off the deck.

I have seen them practice the missile attack against the US navy off the coast, one aircraft flat out at less than 50' another tucked up underneath it, pretending to be the missile, they fly like that until release, one aircraft rolls out and away as the attacker escaping and the other runs at the target as the missile. have heard they put the wind up some of the deck crew onboard a US carrier. flying over the flight deck at a decent rate of knots