page: 1
27
log in
join
share:
howmuch4another
+9 more
posted on Sep, 11 2014 @ 11:10 AM
link
I just thought the shockwave was pretty spectacular and thought you would think it interesting also. Enjoy. Sorry if it's already posted. I didn't see it.


Mount Tavurvur, a volcano in Papua New Guinea, erupted on Aug. 29, spewing ash and causing a shock wave and resultant sonic boom.
While in a boat near the New Guinea coast, Phil McNamara caught a rare sight, the initial explosion of a volcano. Mount Tavurvur is known as a rather active volcano, one that caused many deaths and covered a nearby town in ash in 1994.
Although a smaller eruption in comparison, the recent August explosion captured on video is a rare, close-up look. 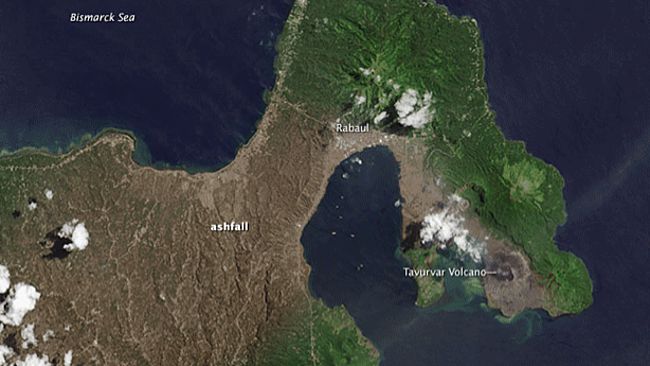 "That was something", says the guy in the video. Seems like a understatement. That was very cool, sounded like monsoon thunder, which is very loud and sounds like it's happening in your head. I probably would have poo in my pants and been trying to skedaddle rather than filming that eruption.

I'm a bit surprised they didn't get knocked over. There's a video of a explosion that happened around here back in the late '80's where a guy had a camera set up on the freeway a mile or two away(unsure why the dude was doing that but he was) and he and the camera got knocked on their asses.

Man, watching that wave, that I don't think I've seen anything like it before. Nature is amazing.

originally posted by: rockpaperhammock
sick video...."holy smoking toledos!" that is gonna be my new line

Yeah, no doubt; that was hilarious. It was more like "Holy shhhhhhiiii-moking toledos!" What restraint!

That shockwave was amazing looking.

I laughed at that too. It was kind of "shhhiimokin"

Ahh nature, you gotta love it...

Thanks for posting great video

originally posted by: smurfy
I bet the guys in that MV boat got their ears blasted!

Watch it in full screen and you can see some BIG chunks of rock hitting the water near the cargo ship.

posted on Sep, 11 2014 @ 12:22 PM
link
I would have been more worried about a pyroplastic flow.
aren't they meant to travel much faster and farther over water?

originally posted by: MrAoxx
I was actually surprised there wasnt a visible wave in the water from the sound wave

All the energy is directed up because of the shape of the volcano, the sides of the volcano opening takes the blast tunneling it upwards in a cone shape.
Shockwave and sound waves behave differently.
edit on 11-9-2014 by Mianeye because: (no reason given)

It was posted nearly a week ago:
www.abovetopsecret.com...

ah....this is one of the few threads worth posting twice as I missed the first one....this actually reminds me of my ex wife.