As US expands ISIL war into Syria , Canada will follow suit...

If your election time is drawing near perhaps now is the time to be very clear about whether or not you are as willing to be deceived as we over here in the land of Murica are!

I am hoping my fellow citizens stand in the face of all the lies we are fed, I shall extend that hope to your country as well!

originally posted by: CHinauser
U.S. was gonna find a way into Syria sooner or later. U.S. must blow something up today.

posted on Sep, 11 2014 @ 03:32 AM
link
The whole thing is undoubtedly a setup.....
The Syrian pipeline for Leviathon gas put Ysrael into a position of vested interest....there are other deposits of magnitude off Cyprus....
Hard to believe but this whole charade is about supplying natural gas to Europe,India,Pakistan,and of course China......
while cutting Russian monopoly on supply.....

Now the US created organsistion has given the US the excuse it wants to bomb Syria again.

What has Assad had to say about ISIS, or is only what the US says important. Why would the US now be wanting to do Assad a favour and bomb ISIS who to destroy Syria when only last year Assad was the bad guy?? 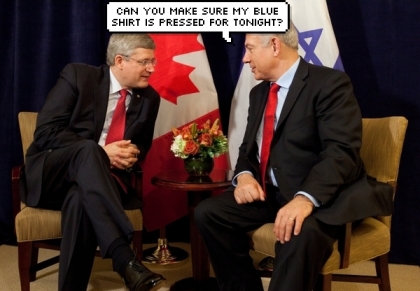 Also too...I was talking to a friend yesterday and she informed me about the missing Libyan jetliners...and what some think they may be used for.

Where is the transparency and accountability that Harper promised? He's sending in personnel just because Obama asked for it, as the press reported? Come on, since when does Harper's primary responsibility lie with doing Obama's bidding? Apparently we now have dozens of people in Iraq Kurdish area (translate that to Syrian border). No consultation in parliament, no satisfactory explanation, nothing. He has singlehandedly destroyed my pride in my country on the world stage.

posted on Sep, 11 2014 @ 08:47 AM
link
This is absolutely sickening!
Let's send our citizens to die and escalate this situation??
Folks, this is theater with real life casualties. Clear as day...

Make sure you all vote for who you see on tv though!! Derp

How do you think we feel in the UK....The USA doesn't seem to like going to war without us watching their backs (look how quickly they backed out of Syria when we refused to go), and 9/10 we go "OK Matey, where should we blow up this month!"

I would rather we focussed our money on making our country great again, focussed on science, tech and space....but noooo, they [government] would rather spend it on aircraft carriers or sending weapons to arm these people we weren't so long ago fighting.

I bet Cameron and Obama whispered in each others ears while sharing a hot tub in Wales " 'ere, what if we get the Canucks to play along, perhaps we can convince the British people it's the right thing to do!"

50p bet says I'm right and the UK tags along on the next jolly boys outing in the ME Butlins playground.

If a significant terror attack, clearly carried out by isisisi, and on this sinister 13th anniversary of the trade center attacks does NOT take place on US soil by midnight (9-12), we declare ourselves winners of this "war" and starting tomorrow no more headlines about this junk!

Thirteen years and nothin...what's all the fuss about? Oh yea this time it makes sense though...wait, what?

yep... Australia too. Just mentioned this thread in mine. I will link it if that is ok?

well...seems as though we are all going off to war again.


even my dog looks worried and unimpressed.

posted on Sep, 11 2014 @ 09:48 AM
link
There is something rotten about this mess........wheres our investigative press hiding
I just know there must be some traces of collusion left out there.....

originally posted by: stirling
The whole thing is undoubtedly a setup.....
The Syrian pipeline for Leviathon gas put Ysrael into a position of vested interest....there are other deposits of magnitude off Cyprus....
Hard to believe but this whole charade is about supplying natural gas to Europe,India,Pakistan,and of course China......
while cutting Russian monopoly on supply.....

Had the U.S. wanted to take direct control of all natural resources in the Middle East under some pretext, as we are continually encouraged to believe here, they would have constituted an entirely different form of Government in Iraq after they conquered it, and would have retained tens of thousands of combat troops there.

They would have pounced on the opening to destroy Assaud's regime in Syria when he allegedly crossed Obama's "Red Line" of the use of chemical weapons - and they would now have an iron grip on that Country as well.

They would have invaded and occupied Libya when it was decided that it was time for Gadafi to go...instead of only providing a no-fly zone for the rebels fighting him.

See, if there was any sense to this argument, America would now have 53 States...and all the oil and natural gas it could ever want.

Doing nothing really isn't an option. It's too bad, moves could have been made to eliminate this problem before they made any advances into Iraq, but we had weak leadership, ructant and unwilling to interviene for far too long. There could have been a different outcome here. Tens of thousands of Iraqis would have gone on living out their lives in relative peace, without having to have been victims or eyewitnesses to atrocitites, murders forced to live in unimaginable terror etc... It would not have become an international problem...

Too bad that only when doing nothing was impossible the choice to get involved was made...

Harper wont win in the elections next year. We are fed up with that American wannabe kiss ass. He knows that the liberals will take it so he is going to do everything he can now.

posted on Sep, 11 2014 @ 10:33 AM
link
a reply to: mobiusmale
Um, where have you been the past decade? They had not only tens but HUNDREDS of thousands of soldiers through Iraq and Afghanistan to protect resources, they installed puppet regimes that provided oil guarantees and (particularly in Afghanistan) were HATED by the people!

Have you forgotten about all the election fraud and political intrigue in these countries by US supported candidates?

They DID pounce on Assad with Obama's 'red line', or did you forget how John Kerry and John McCain were warmongering like CRAZY whilst providing ZERO evidence that Assad's forces had used the Sarin?