India Sends "MOM" to Mars, A Month Away From Arrival to Sniff Out Methane

The US of course has MAVEN which has been discussed elsewhere and I won't go into here and more remarkably India aims to become the 4th national or transnational entity successfully reach the red planet after the United States, Soviet Union and European Union when it's Mars Orbiter Mission (MOM) arrives next month.

Mars is a notoriously difficult planet to reach successfully. Many failed missions have dotted the history of the US, Soviet Union and the EU. If India reaches Mars on its first that will be more remarkable in my opinion than China's rover which landed on the Moon.

More interesting than that is why it is its mission. Remember the reports of the mysterious detection of methane appearing in cycles in the Martian atmosphere? The idea is that the methane -may- be due to some form of life, probably microbial but no one really knows. It could just as easily be some sort of outgassing.

Well MOM's mission is to determine which is the most likely explanation for it! It could be MOM which detects the first signs of present day life on Mars. Or not. Time will tell and there's still a tricky Orbital Insertion Maneuver which the Indians have never done at Mars before.

Anyway I'm posting this because I don't think many on ATS were even aware of this mission since the few times I've brought it up people seemed surprised India had a probe on its way to Mars. 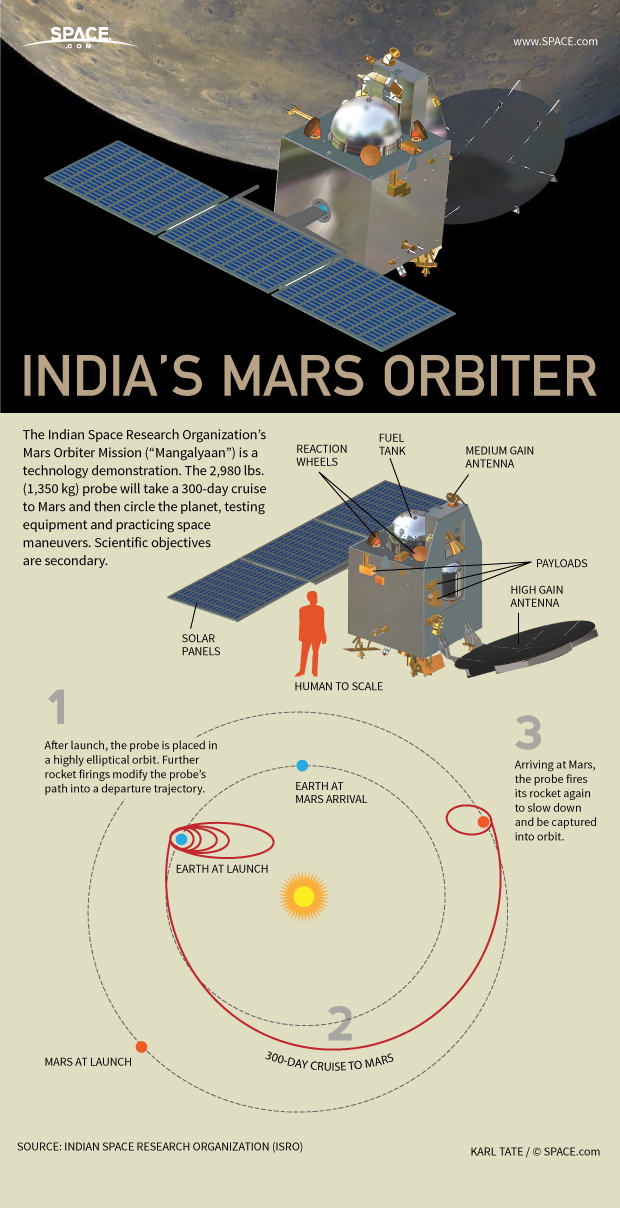 The planet Mars is about to have some company. Two new spacecraft, one from the United States and the other from India, are closing in on the Red Planet and poised to begin orbiting Mars by the end of this month.

The U.S.-built probe, NASA's Mars Atmosphere and Volatile EvolutioN (MAVEN) spacecraft, is expected to enter orbit around Mars on Sept. 21. Just days later, on Sept. 24, India's Mars Orbiter Mission (MOM) orbiter is due to make its own Mars arrival when it enters orbit. Both MOM and MAVEN launched to space in 2013.

The Indian Space Research Organization's Mars Orbiter Mission is India's first mission to Mars and is designed to search for elusive methane in Mars' atmosphere from orbit. Over the years, different orbital and surface missions have found variable amounts of the gas, which can be produced by nonbiological or biological means.

MOM is expected to last six to 10 months near Mars, and has five instruments on board. The spacecraft and all of its payloads are in good health, ISRO said in a Facebook update on Aug. 30.

One of the mission's greatest challenges will be to fire the liquid propulsion engine after it sat idle for nearly 300 days in space. The engine is required to bring the spacecraft into Mars' orbit. Media reports indicate that India plans to do a test fire of the engine on Sept. 22.

If the Indian space agency is successful in reaching Mars, it will be the fourth entity to have done so, following the Soviet Union, the United States and the European Space Agency.

Wouldn't it be quite something if extraterrestrial life is found, not by NASA or ESA, but by India (or China, or Russia)?

posted on Sep, 13 2014 @ 04:11 AM
link
I'm really curious as to what they find there, I think there's a strong possibility that there is life there, if only at microbe level. Even at that it will finally prove that we are not alone and that life can evolve on other planets other than our own blue dot.