Millennium Falcon Photographed by Accident from the Air

posted on Sep, 10 2014 @ 09:47 AM
link
I was going to title the thread "Alien Spacecraft pictured on the ground" but thought better of it


A man who was taking publicity shots for a flying school returned home to discover he had captured images of spacecraft used in the new Star Wars film. 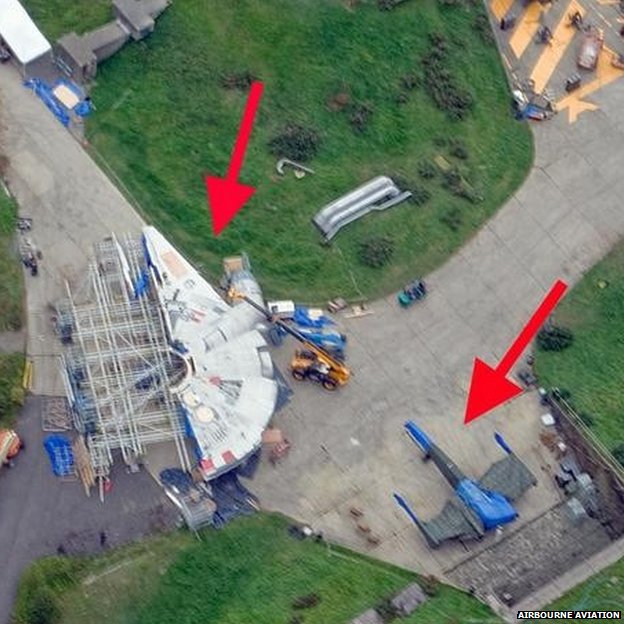 He said: "I didn't know it was there, and we flew down and did some orbits. It was based around the old cruise missile silo. "We didn't realise what we had.
I looked at the pictures on the viewer on the camera but the resolution wasn't brilliant. "It wasn't until I got back last night and started going through the images that it just jumped out at me. "I was quite stunned. It was like, 'wow'.
That's how the picture came about, purely by luck. "I had to go and grab my son who's a big Star Wars fan and get him to come and look at the picture and pinch me and make sure I'd seen what I'd seen.
www.bbc.co.uk...

originally posted by: jtrenthacker
So cool. I think it's awesome that they are going back to practical sets and staying away from heavy CGI.

Agreed, I could never get through the episodes because of the cgi, this movie is lookin like its gonna be awesome.

Wow what cool job that would be, building the millennium falcon! And they get paid for it. God my job sucks

Great stuff! I used to use Google Earth to look for movie sets, I have seen other star wars sets with it.

These full scale models will be used for ground shots. Space combat and ships will still be CGI no doubt.

posted on Sep, 10 2014 @ 11:33 AM
link
I wonder how many workers are caught trying to smuggle out bits and pieces of the sets, props, etc. They could make a fortune on ebay with that stuff. The security on set has to be crazy.

So now we know the Millennium Falcon and an X-Wing are in the new movie ,

"But the shuttle has wings".

o0o0oh, he has a drone! He flew his RC right over the filming crew, now that's balls. I have a hard time not getting nervous flying over a field.

posted on Sep, 10 2014 @ 12:54 PM
link
a reply to: gortex
I bet the guy knew he was flying over the set,but says he didn't to cover himself..
Wouldn't it be cool if they could leave it there after,and make it safe for kids to play in?
My nephew would be freaking right out for weeks if he got to play in that thing!

These people are building a full scale version (complete, inside and out). There's no time frame of when it will be complete, though.

posted on Sep, 11 2014 @ 03:47 PM
link
The underground complex, apparently an old missile silo, makes me think that we are seeing a real spacecraft here, probably ISIS-related. It's probably time to bug out. That thing is really big. Do we know that it is for the movie, as couldn't it just be some guy with too much time and money on his hands? Is the property owned by a prop design company or studio or something like that? I wonder if the underground part is meant to keep this under wraps for the movie or something like that? Could you even get that thing into such a silo? Seems like a hangar would work better so you could never have to bring it out, so I don't think this is super top secret or anything. The guy should do some more flyovers.
edit on 9/11/14 by JiggyPotamus because: (no reason given)

Yea man, I'd love to have one built to scale and actually live in it complete with holographic table & all