page: 1
23
log in
join
share:
gortex
+4 more
posted on Sep, 10 2014 @ 04:44 AM
link
As part of the British Science Festival archaeologists have unveiled the most detailed map to date of the ground beneath Stonehenge and the surrounding area.
One of the new discoveries yielded by the research is what is believed to be traces of a Super Henge with as many as 60 huge stones at nearby Durrington Walls. 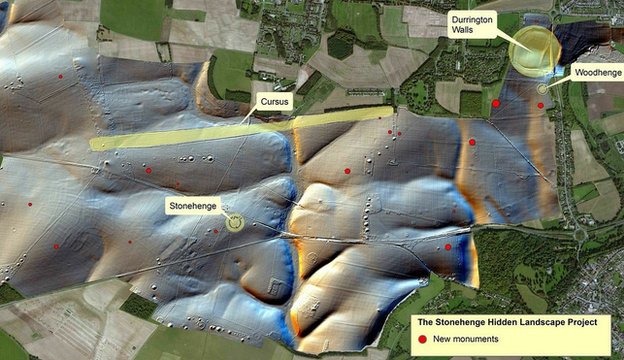 Using ground penetrating radar and other techniques the team discovered a 33m-long timber building believed to be about 6,000 years old.


"[The building] has three rows of roof-bearing posts. It is around 300 square metres and slightly trapezoidal, which is interesting because in the same period on the continent, about 100 to 200 years earlier, we also find this type of trapezoidal building related to megaliths [giant stones]," said Prof Wolfgang Neubauer, director of the Ludwig Boltzmann Institute, which was also involved in the research. 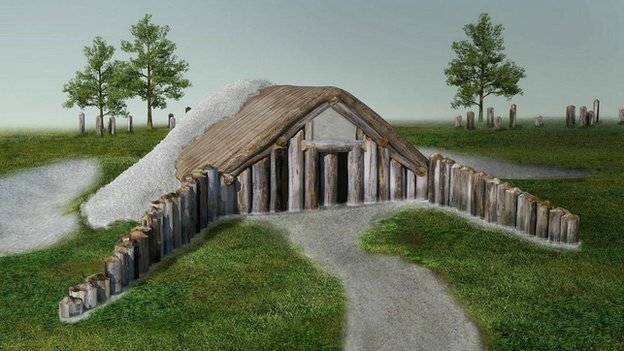 Dr Nick Snashall, National Trust Archaeologist for the Avebury and Stonehenge World Heritage Site, said: "Using 21st-century techniques, the Stonehenge Hidden Landscapes team has transformed our knowledge of this ancient, precious and very special landscape. "Their work has revealed a clutch of previously unsuspected sites and monuments showing how much of the story of this world-famous archaeological treasure house remains to be told."
www.bbc.co.uk...

The more we learn the more amazing the place becomes.

posted on Sep, 10 2014 @ 04:51 AM
link
I look forward to the revelations that will come from this and other ancient cultures!

It seems that for whatever reason we had to devolve to a certain extent from the widsom these cultures used to have. One would imagine as we come to understand the ancients, we will learn to understand ourselves.

posted on Sep, 10 2014 @ 04:56 AM
link
a reply to: gortex
That is a beautiful image! Topic was/is discussed here that your update would/should be added to. Good find nonetheless!

posted on Sep, 10 2014 @ 05:42 AM
link
So Stonehenge was actually a building that collapsed. Like a big ol restaurant or something , And part of the foundation still stands.....

Are the same roads still being used or am I just being weird?

Perhaps by the Druids but nothing else , up until recently the A344 passed relatively close by the Henge but was closed to regular traffic due to feared of damage to the world heritage site.

The Hidden Landscapes project is really exciting, cheers for the update gortex!

originally posted by: Meldionne1
So Stonehenge was actually a building that collapsed. Like a big ol restaurant or something , And part of the foundation still stands.....

I think it was the food court at NeolithicGate Shopping Mall.

Once ISIS conquers Britain, they will bulldoze the whole thing down, so the scientific community should get as much info as they can as quickly as they can.

Nice find. Those dips in the landscape , are they ancient tributaries of the Avon? Looks like the 'avenue' would just about hit the nearest. Does that imply the avenue was a road or canal to the river???

Must be way before the stones were there, though I've no idea how far back that map takes us.


Those dips in the landscape , are they ancient tributaries of the Avon?

Hi will2learn.
I can't say for certain but I believe they may be fairly recent additions , there is mention of trenches being dug on the site for training the troops in WW1.


The survey clearly reveals the foundations of a first World War RAF base just under the rolling fields. There are even trenches on the site, built to train soldiers preparing to travel to the front in France.
www.irishtimes.com...

Seems like an odd place to do it but they must have had good reason.

posted on Sep, 10 2014 @ 11:26 AM
link
Looking at that radar map, it looks like the south east corner of the land had a sandslide. To the west, there are what look like buried streets - that grid pattern.

posted on Sep, 10 2014 @ 06:43 PM
link
A truth of archaeology - unless eroded the land 'remembers' any modification to it and said disturbance of the soil is retained in the soil until that soil is destroyed.

posted on Sep, 11 2014 @ 01:12 PM
link
For anyone in the UK or with access to BBC 2 interested in the project Operation Stonehenge: What Lies Beneath starts tonight at 8.pm.


Recent revolutionary research has just been undertaken which, over the course of four years, has yielded some fascinating insights into the site. Drawing on this new data, archaeologists might finally be able to put to bed some of its mysteries. This two-part programme reveals the project's findings


Stonehenge is an icon of prehistoric British culture, an enigma that has seduced archaeologists and tourists for centuries. Why is it here? What is its significance? And which forces inspired its creators? Now a group of international archaeologists led by the University of Birmingham and the Ludwig Boltzman Institute in Vienna believe that a new state-of-the-art approach is the key to unlocking Stonehenge's secrets.

For four years the team have surveyed and mapped every monument, both visible and invisible, across ten square kilometres of the sacred landscape to create the most complete digital picture of Stonehenge and the surrounding area over millennia. Known monuments have yielded more data than ever before, revealing hidden structures within, and new finds are revolutionising the very timeline of Stonehenge.

Replacement videos from what I assume is a legitimate source given the name of the channel.

Thanks so much! I know what I'll be watching tomorrow night after the kids are in bed!