Yazidi leader: Islamic State has thousands of suicide bombers that can attack anywhere

Mirza Dinnayi, a senior Yazidi leader and a former adviser on minority affairs to the Iraqi president speaks at conference in Herzliya.

“The Islamic State has no nuclear capability, but it has thousands of suicide bombers that can attack people anywhere in the world,” said Mirza Dinnayi, a senior Yazidi leader and a former adviser on minority affairs to the Iraqi president.

The northern Iraqi city of Mosul fell easily upon being attacked by the Islamic State, he said, adding that similar incidents have happened repeatedly throughout the history of the city since the time of the Ottoman Empire.

“At first, the various minorities thought that they would be fine under Islamic State rule,” said the leader, as at first, even the small Christian community in Mosul remained.

However, eventually the Christian community in the Iraqi city was given three options: Convert to Islam, pay a poll tax or exile.

“Christians chose to leave the Islamic State and in response it began attacking the various minorities that remained,” he said.

They do have at least 88 pounds of Uranium but no nukes, thank god. Suicide bombers that can strike anywhere in the world? It's one thing to hear American politicians talk about ISIS in our backyard but it's another hearing from this man because I don't trust our politicians.

Funny how people thought when ISIS first arrived things would be okay. Well, now everyone has learned it will not be okay if ISIS is anywhere near you.

Dinnayi asserted the group is being supported by Turkey, Saudi Arabia, and Qatar and controls territory four times the size of Israel.

“This is a holy war in the name of Allah.”

I'm sure they're supported by more than just the above.

“When the attacks against the Yazidis began, those who did not have the ability to travel, fled to the mountains,” explained Dinnayi, pointing out that the Muslims there cooperated with the terrorists in slaughtering them and raping their wives.

Dinnayi complained that the international community was too slow to react.

It's bad enough ISIS exists and has had free reign to commits these acts of terror but when your neighbor joins them and rapes your wife, your mother, your daughter, you sister....

I'm so against any wars right now but something must done about ISIS. Will bombing be the answer? I dunno, I do know it's not going to wipe ISIS from the face of the Earth. Boots on the ground is not an option so I think the only answer is for the Middle East nations to wipe ISIS out themselves.

The Middle East is such a complicated mess there really is no solution to this problem.

Both groups said that other leading group members were killed after a suicide bomber detonated his explosives belt in a meeting of Ahrar al-Sham's leaders.

So far they are busy killing each other with their suicide bombers.

Yeah, but just cause he's middle eastern doesn't mean he is a terrorist. It's like saying that there was a robbery at a store and just cause they couldn't identify who did it, they blame some dude who was there cause he is black.

But please don't reply to this. I don't want to derail the thread
edit on 9-9-2014 by Kuroodo because: (no reason given)

I completely agree with you. It was just something interesting that happened in this sleepy little town.

posted on Sep, 9 2014 @ 09:53 PM
link
a reply to: Swills
I agree, if muslims are against ISIS they should stop them. I doubt they will but you never know. Saudi Arabia is building a wall, the same wall the US should have to stop people like ISIS from entering the US. I do know this, until the radicals stop killing to promote their religion, wars and terrorism stemming from the ME will never end. These "Holy" wars have been going on for thousands of years, that includes the crusades, when will humanity evolve.

posted on Sep, 10 2014 @ 02:57 AM
link
You know, something I never understood about all this whole terror thing: Why haven't there been suicide bombers in the US? I mean, it's not like they need to hijack a plane. They'd just blow themselves up. Nobody would even know about them until it was too late.

Anyone else wonder about this? It could even be a lone jihadist or a small cell.

I don't want this to happen. But I really am curious why no one has done this. Is something stopping them that I don't know about? (maybe being spied on 24/7?)

PS: Boston bombers.. I'm not counting them because (1) they didn't blow themselves up* and (2) it seems they were part of some false flag (with the f b i in contact with them long before this happened, their friend being shot while interrogated, brother who was capture on video alive supposedly killed run over by his brother while escaping, etc.)

*OK, doesn't even just have to be suicide bombers. If you want to count Boston Bombers... wouldn't you think these terrorists would have done more of these events all over the place. Random places, random dates... to instill more fear into the public (ie. you are not safe anywhere.)

Fake videos of beheading.. The free sryian army funded by the USA turning into isis.. I smell another big rat carrying a false flag.. 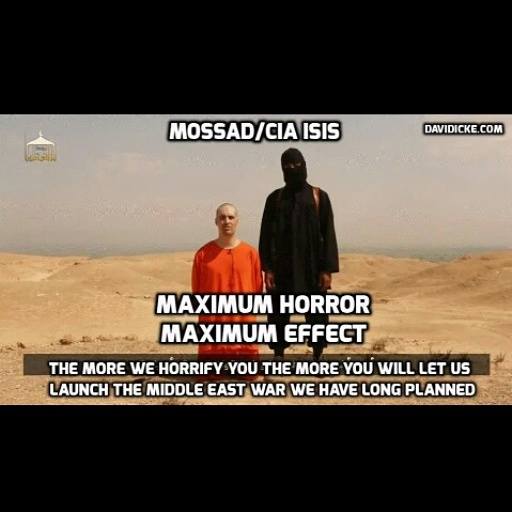 originally posted by: purplemer
a reply to: Swills

Fake videos of beheading.. The free sryian army funded by the USA turning into isis.. I smell another big rat carrying a false flag..

Yes it looks like its all part of a plan. ISIS have been sprawled across social media and public consensus is that we should go into Sryia and sort these folks out....

even if isis was a real threat. that does not give us the right to go into sryia and sort the problem out...

its a poor show..

originally posted by: UseHerName
a reply to: purplemer
Oh yes, I agree. This TOTALLY reeks of a false flag.


Yes they play the world like a game of chess....maybe things will change soon though..

posted on Sep, 10 2014 @ 06:41 AM
link
Keep in mind that the fellow doing all the declaring is also a politician----so why should I believe the words flowing from his lips any more than those flowing from the DC gang?

I say we let the community take care of the issue. If people are going about raping and murdering, it's really up to the neighborhood to take care of the problem.
These neighborhood problems have been going on for centuries. Columbus was looking for a way to avoid that very region when he sailed off on his journey.
It's time to quit meddling in their affairs. But that won't happen as long as Demopublicans are in office.

link it please. I have not seen that one or heard about it.

maybe even in small towns?

individuals causing as much strife as they can?

posted on Sep, 10 2014 @ 08:21 AM
link
The ME is full of religious fanatics with opposing views. They fight; always have. The victors rape, pillage and burn - all in the name of allah.

No amount of intervention, short of educating them into a new belief system, will change their way of life.

Fighting their battles does nothing to change their future, but it certainly changes ours!

We sacrificed many young men and women in Iraq. ....taught their people how to fight...armed them....
At the first sign of trouble, they laid down their arms and ran.