page: 1
28
<<   2  3 >>
log in
join
share:
JesseVentura
+11 more
posted on Sep, 9 2014 @ 07:35 PM
link
This week marks the 13th anniversary of the September 11th, 2001, attacks. In this Ventura Declaration, I DEMAND a new investigation into the greatest tragedy on American soil. Why should anything be withheld from us? If the story’s true, they shouldn’t lock it up! Tell us the TRUTH. Don’t hide it from us. Check out my Ventura Declaration below and stand with me to help uncover 9/11.

Oh...Then we hung him like a common horse thief.

I think the truth about 9/11 will never be known, no matter what we do. There are too many levels of BS'ers in government to give truth seekers the run around until the 22nd century.

The reality of the situation is such that history will be stuck with whatever version of the truth they see fit to write.

As everyone is aware, the US has been slipping into a major economic hole and the best way to repair the damage to the economy is to start a war. It doesn't matter with who, just start one and the aggressors economy will get a boost, hopefully restoring it to pre-recession levels.

Unfortunately the US government has dumped too much cash into the system . The only countries buying the paper are China and Eastern Europe. Their best weapon against Uncle Sam is to simply dump the bonds all at once. Your government will grind to a halt. Unless of course they start another war.

If, as you suggest 9/11 was not precipitated by Iraq, but Saudi Arabia etc., then revealing this could prompt the Saudis and Russia to chuck the Petro-dollar in favour of Euros, Deutsche Marks etc. then a Perfect Economic Storm will engulf the planet. The hamster wheel of spin doctoring is in full gear my friend.

BTW, how do I get a cool tie-dyed shirt?

It doesn't go into detail about the 'whys' and 'whos' like some researchers have (available for a look-see on line also) but just getting people to realize that They Nuked New York City and they won't hesitate to do it again if it suits their agenda would be a huge start. The people who are ignoring the truth, or denying it, are just as at risk as the rest of us for a repeat.

I've spent hours trying to figure out exactly how to force another investigation; barring a People's Grand Jury with subpoena power, I don't see it happening. The powers we are up against are psychopaths and they kill without a second thought anyone who tries to bring them to justice. 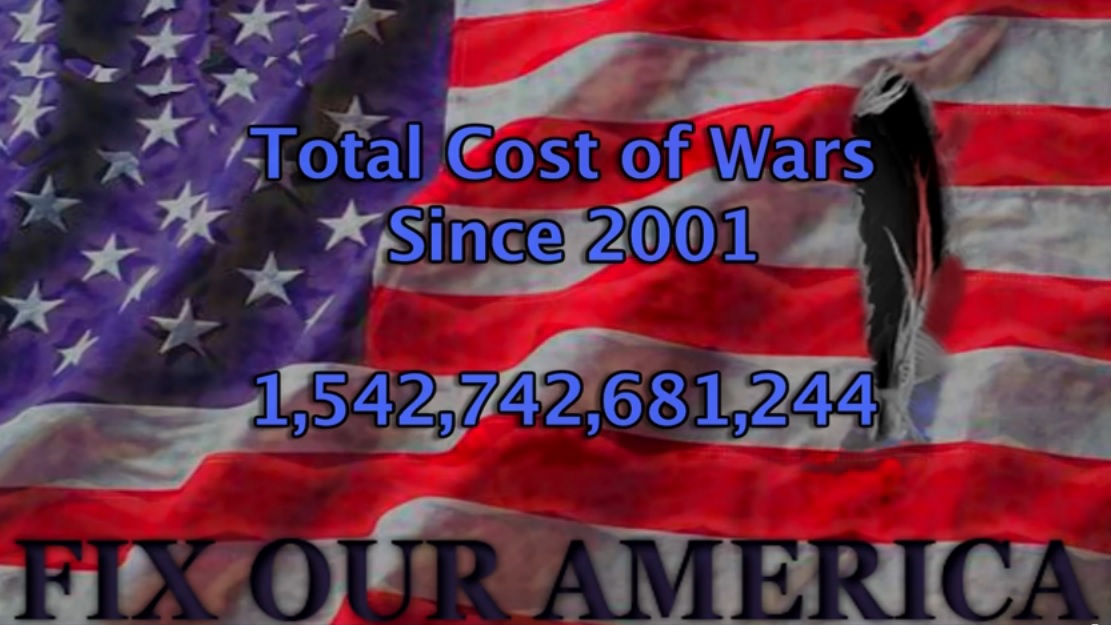 If we don't try then it definitely won't happen.

Best bet is to turn the NSA into a force for good but somehow I don't see that happening.

I think a more direct approach would be to hold a LOT more people accountable for war crimes.

We should be investigating the bankers and various other tycoons who call these kinds of shots in the first place.

Endless war, now thats something I can rage against. Except…

there are so many wars being fought across the globe right now, I am in danger of becoming desensitized to it. When I was young the Vietnam conflict shocked me to my core. In the subsequent decades there have been many such just like it.

Unjust, lopsided, protracted, destructive shows of force. I watch stuff like this and I can't feel anything anymore. After all, whats another little piss ant village in the scheme of things?

Now, 911 may have been the catalyst for all this stuff that came after, and we basically know who's responsible and why they did it.

Just look around…This isn't about 911 anymore, its about conquering lands for territory and resources. Lets rage against that.

originally posted by: BridgebyaFountain
a reply to: douglas5

We aren't selling any tie-dyed shirts, but feel free to join in on the fun!

Jesse, run for president, you have my vote! We need someone in the white house that has enough backbone to push against the powers that be. I think many Americans would support your run. We were sold a bag of goods when Obama ran on government transparency. We need someone in there that isn't afraid to push the envelope.

I'm really disgusted with the current two party system, the political corruption, political infighting, secret government cover-ups, and the government over reach into our personal lives and privacy. We need someone to shake up the house! I'm sure if we got someone in there who isn't afraid to ask questions, and stood-up for average Americans, it would become a rally cry for most Americans! I say it's time to stop the usual politics and time to energize the American people!

So i doubt this post will make me many friends but here goes.

I cannot take anything this man says seriously on the subject of 9/11 since those videos where he openly seemed to be endorsing Judy wood. I just cannot get past that, if he wants us to take him seriously he should never have gave her the time of day.

Also, to be fair he does make some good points such as the length of the commission and the way the term "truther" now carried negative connotations. Neither of those points however suggest any kind of "9/11 false flag".

I was born in Glasgow, let me tell you something Mr. Ventura, the hard men don't need to tell everyone what a "big boy" they are. You are a showman sir, you are not a serious political pendent, investigator, presidential candidate or truth seeker. You are a showman.

thank you.
edit on 9-9-2014 by OtherSideOfTheCoin because: (no reason given)

I just thought you would send me yours. You like Canadians don't you?

I am curious what the EXACT process would be to revisit these MURDER INVESTIGATIONS, WHO NEEDS TO BE PRESSURED BY THE PEOPLE,we need pressure points now Jesse, it isnt time to play Captain Crunch,not yet.

There cannot be that many steps to the process, we NEED then outlined clearly and accurately so we can build a Tactical Dynamic Template which will allow everyone to see the entire picture clearly.

This is the right direction, however one would not like to think that it was a Micro-Op designed to drain energy and resources hence internet juice from the real MORE tangible realistic approches which could be used.

I have to ask myself if this is the best Jesse Ventura can bring or if he is holding back.

This noose is closing fast from all directions on the Global Cabal.

The Industrialist and the Olde Money and the Politicians and the New Money and the Union Influences and the Pharmacutical and Medical Cabals, the Insurance Industry Money,the Manufacturing Industry money the Publishing Industry and Education System money......all of these sources and many many more can now be listed and tracked in rel-time using simple free online data-interpretation programs , the FISCAL IMPACTS money make can now be instantly connected to the ORIGINAL CATALYSTS NO MATTER WHAT COUNTRY THEY ARE REGISTERED IN OR WHAT BANKS OR STOCKS OR OTHER MONEY MOVING METHODS THEY USE.

Busting up the 9/11 job will happen when the money is traced and names are added to those dynamic movements.Even if DOCUMENTS have been destroyed we can accurately define the pre and post dynamic connections and reveal more evidence either upstream or downstrem.

There is no escape if the people want answers and then DEMAND THEM.....because now we can SHOW everyone WHO they need to PRESSURE to get the things they want,who they need to EXPOSE to get things done,one by one the People must remove the Pawns from the Board which TPTB have been using to win the Game,they are in Major transition right now,unseen transition and are willing to accept MASSIVE POTENTILLY MASSIVE losses to provide for the escape of a VERY FEW OF THEM.


Thisis why we need to learn the PROCESS of revisiting these MURDER CHARGES....we need NAMES OF PEOPLE IN POSITIONS WE NEED TO QUERY.We need to make these people 100% ACCOUNTABLE FOR EVERY TINY THING THEY DO...100% ACCOUNTABLE....every one who tries to fight the process MUST be uncovered and held accountable so their future impacts are NEGATED and they are REMOVED FROM THE BOARD....once the Pawns start falling things will happen fast these FEW MAIN cockroaches are planning on going DEEP UNDERGROUND now, for DECADES,they have tripped the self-destruct button now.The people CAN FIND THE TRUTHS NOW.

When these Roaches abandon their Brethren in the name of species survival they let the entire House of Cards fall as it may,they effect NO DAMAGE CONTROL,they let each layer fall onto the one beneath it like the Twint Towers fell.

This is the BIG WAVE Jesse,they have hit the Auto-destruct Sequence the ULTIMATE TACTICAL DISTRACTION...even trying to push Putin...this one WILL take the journey for the truth OVER THE TOP.

Keep at it,the people are now online and listening in greater numbers than on MSM,more intention is exchanged online,there is less filler it is all meat.

I am now paying attention Jesse, this is a good time in History to be observing the People re-gaining real STRENGTH via the Internet.

posted on Sep, 9 2014 @ 08:34 PM
link
If the truth about 9/11 ever came out in it's entirety, it would be the end of the US presidency. Not an administration but the legitimacy and credibility of the most powerful office on the planet (arguably). Maybe that is a good thing but we should definitely be cautious of what we wish for.

The scope of blame would be vast. If you want to avoid being implicated...implicate everyone.

posted on Sep, 9 2014 @ 08:35 PM
link
People around the World have been demanding the same since the beginning. It will never happen and you demanding it won't change a thing. More powerful people than you have gone the same route.

I give it one chance of actually happening tho.

When the US Govt. wants their battle against the people so as to justify a Nation wide Martial Law, all they have to do is just leak the truth.

This is exactly the right place to be demanding inquisition and discourse regarding these Historical Issues.

Every single question we ask CREATES a natural NEED for an ANSWER.....any single question asked here or elsewhere about this issue COULD be that catalyst that is the hair that breaks the Camels back so to speak in terms of breaking the truth free from its current state of bondage.