posted on Sep, 9 2014 @ 07:03 AM
link
Archaeologists working in Denmark have discovered a distinctive ring-shaped Viking fortress, which is thought by some historians to have been used to launch an invasion of England. 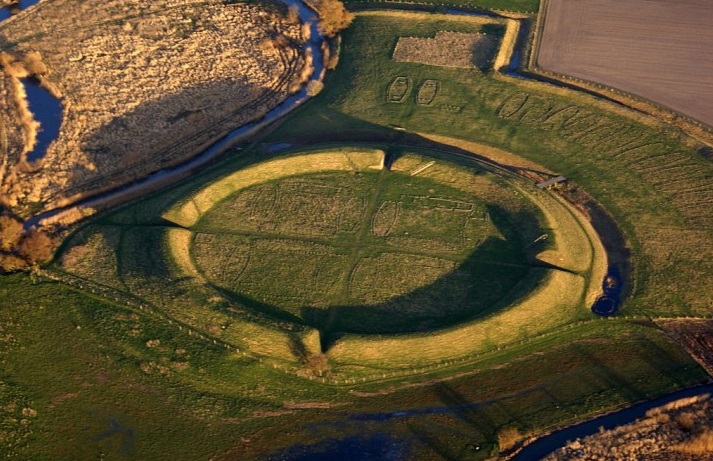 A 500-foot, ring-shaped Viking fortress discovered in Denmark may have been used to launch an invasion of England, say historians.The construction unearthed is about 40 miles south of Copenhagen, where ancient roads joined at the turn of the first millennia.

"This is the first time for more than 60 years that a new Viking ringed fortress has been discovered in Denmark," explains Nanna Holm, an archaeologist and curator at the Danish Castle Centre.

Søren Sindbæk, who is a professor of medieval archaeology at Aarhus University and took part in the excavation added: "The discovery of the new Viking fortress is a unique opportunity to learn more about the battles and conflicts of the Vikings, and gives us a new chance to study the most famous of our Viking monuments."

Groundbreaking technology was used to discover the fortress. According to Aarhus University, Helen Goodchild, a University of York researcher used a technique called gradiometry, which involves taking measurements of the Earth's magnetic field found in the soil at the site.

Research is continuing on the analysis of the burned gate posts for an accurate dating of the fortress, and it may date back to King Harald Bluetooth—or the son who deposed him, Sweyn Forkbeard, who ruled at the turn of the first millennia. Forkbeard later became the King of England after invading London in 1013.

Looking at the pic one wonders how they could miss it a thousand years!

Because the pic is not the discovery, the pic is Trelleborg, another viking fortress

They excavated an earth mound.
But seriously they did,

Helen Goodchild, a University of York researcher used a technique called gradiometry, which involves taking measurements of the Earth's magnetic field found in the soil at the site.

I wonder what those other shapes were in the top of the pic? Were longhouses that shape?

The picture used in is from Trelleborg. It is from the time of Harald Blåtand. In English he is called Harold Bluetooth - which is also the founding name for the bluetooth technology today.

The new Trelleborg discovered is still under ground.

Because the pic is not the discovery, the pic is Trelleborg, another viking fortress

Oh jeez, I hate it when they do that. It happens all the time with bogus pics, nice catch.

Journalists do that - they are not particularly concerned with historical accuracy.

It provided an easy to make way to keep your domestic animals safe and helped prevent your position being rushed at night.

Yes, it is a picture of trelleborg, not the discovery, and they were more 'barracks' than longhouses. They had living quarters in a certain fashion, some people believe they were arranged to coincide with astronomy.