He wants a progressive estate tax to equalize all the wealth inequality.

This will solve many problems.

Until all the wealth is equalized that is.

Then it's always back to square one when they run out of "distributable" wealth to distribute.

The lower classes will then have to distribute among themselves.

Sen. Bernie Sanders, a self-described socialist, called for a progressive estate tax on multi-millionaires and billionaires during a speech on Saturday.

“A nation will not survive morally or economically when so few have so much while so many have so little,” Mr. Sanders said at the Vermont AFL-CIO annual convention.

“We need a tax system which asks the billionaire class to pay its fair share of taxes and which reduces the obscene degree of wealth inequality in America,” said Mr. Sanders, an independent who caucuses with the Democrats.

posted on Sep, 8 2014 @ 08:36 PM
link
More words of wisdom from Bernie. He is right why should these billionaires pay a lower tax rate than the rest of us? We should have a flat tax that is the same percentage for everyone no matter how you make your money. It is BS that people like Romney is paying 14% while the middle class is paying almost twice that amount. This is my favorite speech by Bernie.

posted on Sep, 8 2014 @ 08:40 PM
link
This sounds great until retirees realize that they are paying that same lower tax rate that billionaires pay and that many of them are "wealthy" and would get clobbered by this tax as stuff gets equalized.

How many people realize that the same grandma and grandpa that no one wants to have to live on cat food on their fixed income will be the very same ones paying this "wealth" tax because they live on their retirement investment income and the properties they've worked hard to earn all their lives?

So it's not just soak the rich, but soak the OLD, too.

posted on Sep, 8 2014 @ 08:52 PM
link
Oh how I would love to believe in any politician coming from either Democrat/Republican camp, but it is very difficult for me to do so. For I have called them the demonazi's/republifascists for sometime now! The little bit that I have heard about Bernie I have always enjoyed and that is because of "stands" like this.

However, even if it is genuine which is debatable, there seems to be too many mechanisms of control in both parties and to me the only way out is for massive public support for third parties. Enough to get them a place and a voice outside of RT like in 2012.

I do believe people are finally getting to this point, the lies, propaganda, false hope, have been too much considering that if you are paying attention at all it is very clear that we have a system of Fascism disguised as a Democracy, when we are supposed to be a Democratic Republic! 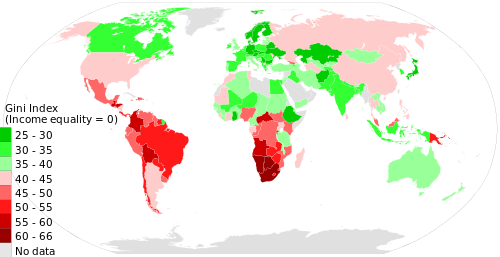 ETA: These are by inequality in the distribution of family income. Not very good company.

I think it's only natural that with an income disparity such as this that the wealthy should foot the bill and be on the hook for higher taxes.
edit on k042014-09-08T22:04:26-05:00kAmerica/Chicago08 by kicked because: (no reason given)

posted on Sep, 8 2014 @ 10:07 PM
link
The democracy will cease to exist when you take away from those who are willing to work and give to those who would not.

To compel a man to furnish funds for the propagation of ideas he disbelieves and abhors is sinful and tyrannical.

I agree, there should be a flat tax so everyone pays their fair share. Unfortunately, our politicians are in the pockets of the wealthy so I doubt the flat tax will ever become a reality.