In a half hour or so, he told some doozies and did plenty of deflecting and distracting.

He's been hot on the campaign trail doing his best to send the message that Democrats need to be the majority party everywhere.

I think about all he is accomplishing is keeping only the most brain-washed supporters from abandoning.

Many people are on to this gag....

During his Sunday "Meet the Press" appearance, President Obama brazenly lied to host Chuck Todd about his January reference to ISIS as "JV." That's not my judgment, it's the judgment of PolitiFact, a site created to protect Democrats. This time, though, Obama went too far, even for a leftwing site like PolitiFact:


Obama said his JV comment "wasn’t specifically referring to ISIL." He was not specifically asked about Islamic State, but it’s pretty clear this is the group that was being referenced in the conversation. The transcript backs this up, as do news events from the time of the discussion.

We rate the statement False.

There are moments in edited TV content when a keyed-in viewer can see a cut intended to make a “comfort edit”, smoothing out the narrative. The Chuck Todd interview with President Obama was riddled with them. Even when being interviewed by a fellow ideological traveler.

@00:24 “this administration has” – President Obama using third person distancing tactic discussing an uncomfortable negative. When the topic is positive, or viewed as favorable currency, the term “my administration” is used.

@01:05 “what I have done over the past several months” – President Obama knowing he was caught flat-footed, having called ISIS “JV”, and having admitted not having a strategy is now trying to give appearance of them having been working on this all along.

@01:45 “the next phase, is to start going on some offense” – Again, framing incompetence as if there was a previous outline/plan in place. This is similar to the re-writing of the Syrian RED LINE strategy, ‘yeah, yeah, we, um, we meant to um, create that Russian intervention WMD thing’. Embarrassingly juvenile for a President.

And quite frankly, I would prefer he returned to Martha's Vineyard and golfed the next two years away. Maybe he can take Congress too.

Not very conducive to collalition building.

How are we ever going to get others to commit troops if we won't ?

I really wish he would keep using words he is almost certain to eat.

Also, I'm no Military Expert but shouldn't we quit telling everyone what we won't do?

DAVID64
+2 more
posted on Sep, 8 2014 @ 05:38 PM
link
Truthfully, I can't watch anything that involves him. The constant smugness, lies, self congratulatory pats on the back are just too much. I have gone so far as to just label anything out of his mouth as a lie. Saves time.

Give me a politician who do none of the above and I'll vote for him (or her).

posted on Sep, 8 2014 @ 05:42 PM
link
a reply to: MystikMushroom
Junior Varsity. Basically saying they're not much of a threat.

Give me a politician who do none of the above and I'll vote for him (or her).

Putin knows which world leaders are JV.........take a guess who that includes.

"We're going to have to... eliminate the schism between Sunni and Shia that has been fueling the violence..."

Beyond that I couldn't listen....but I heard other snippets of this conversation last night and I've got to say---this man is lost, simply lost and has no clue.
I could go on for months about the contradictions within this interview...but I've got to find some duct tape to keep my head from exploding.

posted on Sep, 8 2014 @ 06:34 PM
link
Did anyone, including the people at Politifact, read the original interview? Here is what was said:

Remnick: "You know where this is going, though. Even in the period that you’ve been on vacation in the last couple of weeks, in Iraq, in Syria, of course, in Africa, al-Qaeda is resurgent."

Obama: "Yes, but, David, I think the analogy we use around here sometimes, and I think is accurate, is if a JV team puts on Lakers uniforms, that doesn’t make them Kobe Bryant. I think there is a distinction between the capacity and reach of a bin Laden and a network that is actively planning major terrorist plots against the homeland versus jihadists who are engaged in various local power struggles and disputes, often sectarian."

Remnick: "But that JV team just took over Fallujah."

Obama: "I understand. But when you say took over Fallujah –"

Remnick: "And I don’t know for how long."

Obama: "But let’s just keep in mind, Fallujah is a profoundly conservative Sunni city in a country that, independent of anything we do, is deeply divided along sectarian lines. And how we think about terrorism has to be defined and specific enough that it doesn’t lead us to think that any horrible actions that take place around the world that are motivated in part by an extremist Islamic ideology is a direct threat to us or something that we have to wade into."

The interviewer specifically said al qaeda and named a number of different regions. He only mentioned Fallujah (indicating ISIS, ISIL) after Obama made the JV statement.

Obama said his JV comment "wasn’t specifically referring to ISIL." He was not specifically asked about Islamic State, but it’s pretty clear this is the group that was being referenced in the conversation. The transcript backs this up, as do news events from the time of the discussion.

No, it's clear that al qaeda was mentioned, not ISIS.

I'm not a fan of Obama but, in my opinion, they are having to stretch this one out and make a lot of assumptions to make it stick. Politifact can do better than this.

ETA: I don't know why Obama would back away from his JV statement anyway. It's not like ISIS is the fricken Russian military (Varsity).
edit on 9/8/2014 by sheepslayer247 because: (no reason given)


I don't know why Obama would back away from his JV statement anyway. It's not like ISIS is the fricken Russian military (Varsity).

Except ISIS has taken oil and sells it.

And they knocked over a bank for some big money, plus some other things.

ISIS is not the Russian military, but they must have something going?


I don't know why Obama would back away from his JV statement anyway. It's not like ISIS is the fricken Russian military (Varsity).

Except ISIS has taken oil and sells it.

And they knocked over a bank for some big money, plus some other things.

ISIS is not the Russian military, but they must have something going?

The same thing could be said about the freshmen volleyball team.....they have some things going for them, but that doesn't mean they are ready to stand against the pro circuit.

posted on Sep, 8 2014 @ 08:17 PM
link
What the President lied? What a shock. Btw the article is wrong about PolitiFact it is not a left wing site nor is it a right wing site it is neutral.

originally posted by: buster2010
What the President lied? What a shock. Btw the article is wrong about PolitiFact it is not a left wing site nor is it a right wing site it is neutral.

They sometimes put things in perspective to keep the illusion of being neutral.

Most of their Malarkey focuses on keeping the Progressives in good light.

They are very professional and good at cloaking the agenda.

They fool a lot of people, but not everybody.

That very notion has been a popular sentiment throughout the Right Wing echo chamber for some time. If they disagree with or call out the BS the Right employs......they are Leftists in disguise! Or at least that what they tell us.

But you will not see the Left saying the same thing, because when they are called out they just accept it and move on.

PolitiFact is "Owned" by The Tampa Bay Times/Polynter Institute.

The newspaper operates PolitiFact.com, a project in which its reporters and editors "fact-check statements by members of Congress, the White House, lobbyists and interest groups with a liberal point of view...."


POLITIFact is one of the worst liars of anyone on the left.

Not only do they lie, they pretend to “fact check”. Funny thing, facts. It seems that PolitiFact has polished the art of spin into a full time occupation.

These folks are left wing hacks that do nothing more than fake “checking” of facts and, using subjective measures, declare nearly anything uttered by a Republican as false while either completely ignoring the lies from the left, or spinning falsehoods to somehow manage to call Democrat claims “true”.


A new course on Islam designed for journalists tries to minimize the impact and importance of ''jihad'' by comparing it to the number of murders in America each year. That same course claims ''right-wing activists'' tried to tie American Muslims to terrorism and doesn't mention examples of Islamic attacks on press freedom.

That's the way a prominent news organization is teaching journalists in a three-hour online course. The Poynter News University, part of the Poynter Institute, launched the free course ''Covering Islam in America'' to guide the media on their coverage of Muslim communities.

Soros-Funded Group Behind Course for Journalists That Downplays 'Jihad'

To counter my post, you post a link to a known biased website that perpetuates the same BS I was referring to when I said the Right Wing echo chamber?

ETA: Your WIKI post kind of reinforces what I was saying.
edit on 9/8/2014 by sheepslayer247 because: (no reason given)

You know my friend the only thing Obama needs to concern himself with is his Golf game, no one wants him around, the Dem's are losing the Senate and even as bad as the Repub's in Congress are, their going to keep it and gain.
The Democrats don't want Obama anywhere close to them as they go out and Beg, Buy and Steal that Vote!
After Obama's Polls came out:

They'd prefer he does what he does best.

A little light reading,,,, he's a Liberal, he doesn't understand Big Words!
So, off he goes, 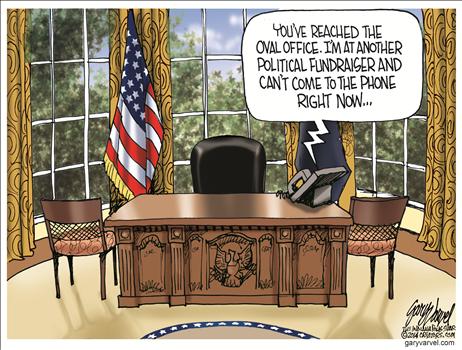 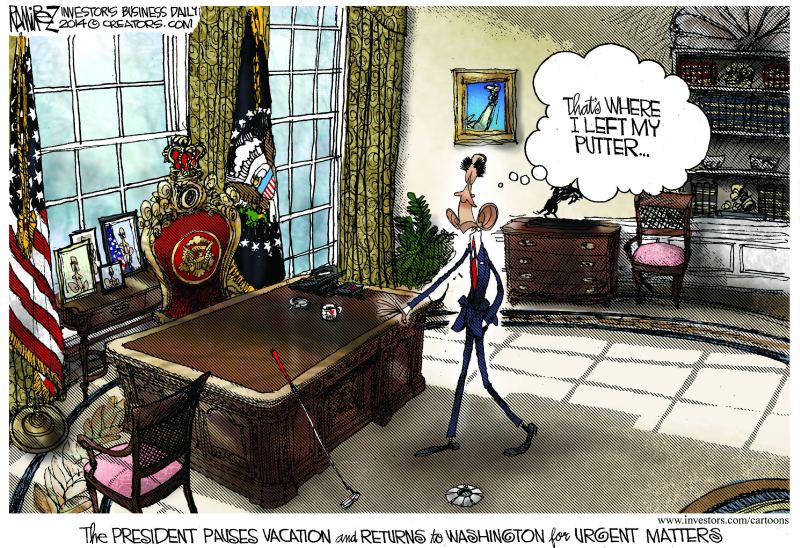 What everyone is thinking to include the other True World Leaders! 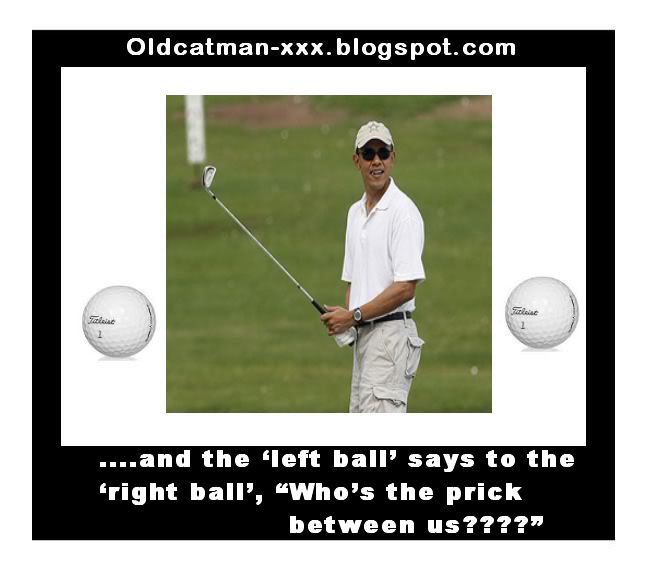