Professor Martenot and his "music from the ether"

posted on Sep, 7 2014 @ 12:23 PM
link
Eighty years ago Professor Maurice Martenot presented his new musical creation “The Ether Wave Piano” to Pathe News cameras. Sitting at the keyboard, Martenot demonstrated how this new strange musical instrument could sound like a violin, a guitar, a piano, and even birds tweeting. The device was called an Ondes Martenot, and was first built by the professor in 1928. 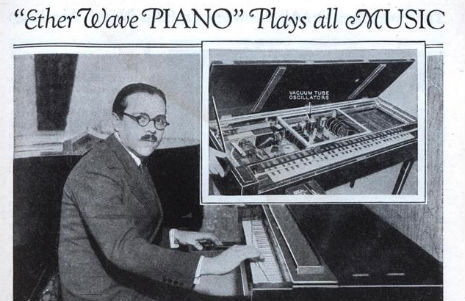 
Claimed to be the most outstanding musical invention of the twentieth century because of its ability to reproduce the tones of any musical instrument or voice and to create entirely new tones, the device is operated by direct mechanical control of a series of oscillating radio tubes, which generate the sound waves of variable pitch and volume.
The keyboard of the instrument is used as the scale, and the position of the forefinger of the right hand above it regulates the tone produced. Attached to the finger are two finger pieces, connected to a cord that operates a series of condensers in the instrument, thus varying the capacity, and hence the frequency, of the radio circuit.
Volume is controlled by means of a lever at the left hand side of the instrument, its range being from an almost inaudible pianissimo to a ringing fortissimo. Staccato notes are produced by tapping the finger on the volume lever. The rheostat permits the notes to be cut off at will by breaking the plate circuit of the amplifier. Very little effort is required in playing this instrument; an apt pupil can learn to play it easily in about four months.

With its Theremin-like sound, the Ondes Martenot became a popular choice of instrument for certain composers, in particular Edgard Varèse and Olivier Messiaen (who wrote the Fête des Belles Eaux which used six Ondes to perform the score), as well as movie composers like Elmer Bernstein (Heavy Metal, Ghostbusters), Brian Easedale (Powell and Pressburger’s The Red Shoes) and Richard Rodney Bennett (who memorably used the instrument in Ken Russell’s film version of Len Deighton’s The Billion Dollar Brain) as well as innumerable horror and science fiction movies from the 1950s.

What an apt name for an instrument, The Ether Wave Piano. After all, it uses

…a series of oscillating radio tubes,


What say we, the first synthesizer? I wondered where all that weird sic fi movie music was coming from when I was a kid. That was part of what made those movies so scary cool, the anticipation in the music.

Did it accompany Gort in "The Day The Earth Stood Still"?

ETA: Yep. Sorry OP, couldn't resist. One can clearly hear the Ethereal Warble in the background, most delectably.