My dog sounds as if he is talking to me:

posted on Sep, 7 2014 @ 02:36 AM
link
strange thing, but Mr Albert and I go everywhere together and in the past, he sometimes sounded like a pirate when he was yawning. Lately, he actually sounds as if he is saying words... like 'home, walk or now'.

He also seems to warn me about things... like when I am going to have a seizure and recently, (I have PTSD), he will start annoying me so I don't forget to do things...tugging at my arm etc.

He is so intelligent.

Never discount the wisdom of a dog.

You are a lucky guy.

posted on Sep, 7 2014 @ 02:52 AM
link
I sure hope you haven't drank as much as I have because my cat talks to me all the time. I swear it cries momma at my door and tugs at me when he wants to go outside like a dog. I think animals try to talk

I believe that dogs/cats can communicate with us... but to hear him making the sound of a word was astounding.

I am going to try to record Mr Albert talking to me and post it up. It is incredible.

posted on Sep, 7 2014 @ 03:07 AM
link
That would be cool to record. With mine I never have anything around and I think he knows and stops lol. The other household members have heard him and told me I spoil him too much. I have a bad habit of talking to my animals like they understand me.

originally posted by: Thurisaz
a reply to: Angel Marie

I believe that dogs/cats can communicate with us... but to hear him making the sound of a word was astounding.

I am going to try to record Mr Albert talking to me and post it up. It is incredible.

I would love to hear a recording of this. I have seen dogs talking in vids and it is astounding!!

I swear my cat meows I want out in a meow sound.

I think if you talk to them lots they do learn your language. Babies can't talk but know what you're saying right?

Would love to see a video if you can get one. Of course they won't perform on cue for it.

yes I think the more we talk to our pets, the more they understand. I walked him today and did not feel embarrassed at all when I was talking to him in public ... even if a few people were looking at us. 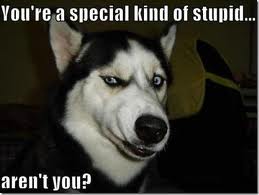 I know what you mean. Took me ages to try and get this pic of him. 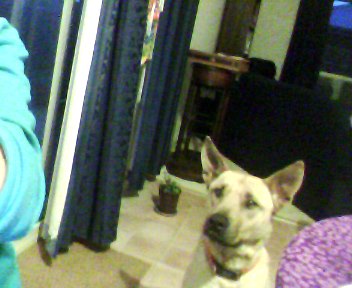 When he was a puppy, he looked a bit like a kangaroo and everyone was laughing at his big ears.

posted on Sep, 7 2014 @ 04:00 AM
link
a reply to: Thurisaz
I think people think I'm nuts. I get strange looks, but why not? I'd feel as if I'm ignoring them otherwise. They understand. It's like some people think they only know 5 words. Come, sit, walk, lay, and food, when there is so much more you can say. Haha

I have two cats. One is toilet trained. I just told him he could use a toilet if he needed to go. It was that simple. I said it once, for a joke actually and he used it, has done ever since. He goes outside, won't use a litter box if he's locked in.

Error on your video. It won't play

originally posted by: violet
a reply to: douglas5

Error on your video. It won't play

I had a dog that was smart like that... I mean reeeally smart... like escaped from a lab smart. Putting a leash on her gave me a guilt trip every time... but she was okay with it.

Those smart dogs can be a pain, though... they can't read, or follow narratives in media entertainment, so they rely on you to keep them occupied... and it's time consuming, unless you can stand a depressed dog, that is.

It just really sucks that they are so short lived... but the world is a much better place with them around.

ETA: oh...wow... your dog looks much like mine did. Do the ears move independently of each other? Mine was reddish tan, but otherwise nearly identical... a super mutt we figured out was an "American Dingo" or Carolina Dog... mutts are generally smarter. Mine couldn't speak English well, but for all I know, she spoke fluent German and I just didn't know...
edit on 9/7/2014 by Baddogma because: add

posted on Sep, 7 2014 @ 04:43 AM
link
Thats way cool!!! I was just watching youtube videos the other night of animals talking, its pretty crazy.. I totally agree that they can communicate with us and they all have their own little ways! i believe they are very sensitive to what is happening inside of our bodies i have lost count of the anount of stories on dogs that have made their owner go get a certain bit of their body checked out because their dog(s) will not leave that part of them alone and then discovering think like cancer in that exact spot, and i think they are sensitive when some kind of attack is going to occut also, they're very clever!

yes his ears move independently... like a radar. LOL

as for your dog speaking German. LMAO

posted on Sep, 7 2014 @ 09:30 AM
link
Every dog I've ever owned forms their own unique vocabulary that I can understand just fine. They understand my English just the same. You just have to spend time with them.

posted on Sep, 7 2014 @ 10:24 AM
link
We sell ourselves short if we fail to recognize the intelligence of our pets or animals in general. I have no doubt that your dog tries to communicate with you OP.

My cat who is now 12 yrs old was a complete hellion as a kitten, to the point that we had to put in time out due to the frenzies he would go into. One day when picking him up to defuse his frenzy once again, he grabbed the door frame and yelled very clearly "NOOOOO" there were 6 of us in the room at the time and we all heard him with no doubt.

Another cat that I had was having a problem with worms. I gave him his worm medicine and then he needed to fast for 12 hours. That meant he could not eat again until 3 am. I really wanted to stay up till then so I could feed the lil guy but just before 1 am I had to turn in. I looked at my cat and said, " If you can't wait until I wake at 7:30, you can wake me at 3 and I'll feed you then." I was awakened by him as he nuzzled my face. I can not tell you how amazed I was when I looked at the clock and it was 3 on the dot!

BTW, your dog is very handsom , love those big ears!

And I guess I was wrong on another post, you do have a heart.