The weapons traded here are almost exclusively various Bulgarian, Chinese, Czech, and Egyptian versions of the AK-47. Most of the guns are battle-worn and in need of maintenance. Some stores sell sniper and hunting rifles, as well as RPGs. Ammunition sales are most profitable, since all peshmerga units are constantly undersupplied. American weapons are also trickling in; a few sellers offer M16s or MP5s at $2,800 to $3,500 apiece.

American weapons have yet to reach his unit of 2,800 men. "We are not happy with what we have," he says, and points to the rusty firing pin of the dismantled Chinese Kalashnikov laid out in front of him.

"We are able to defend ourselves, but defeating da'esh will only be possible with new American weapons."

Say what you will--- but the Kurdish people have not just rolled over and let-- ISIS, ISIL, IS or whatever name their using this week---take over their homes land and women...

They fight back, with everything they have... sadly, that isn't much. Often they have to use their own money to buy their own weapons and ammo but when it's you and your families freedom on the line-- you do whatever you have to do. 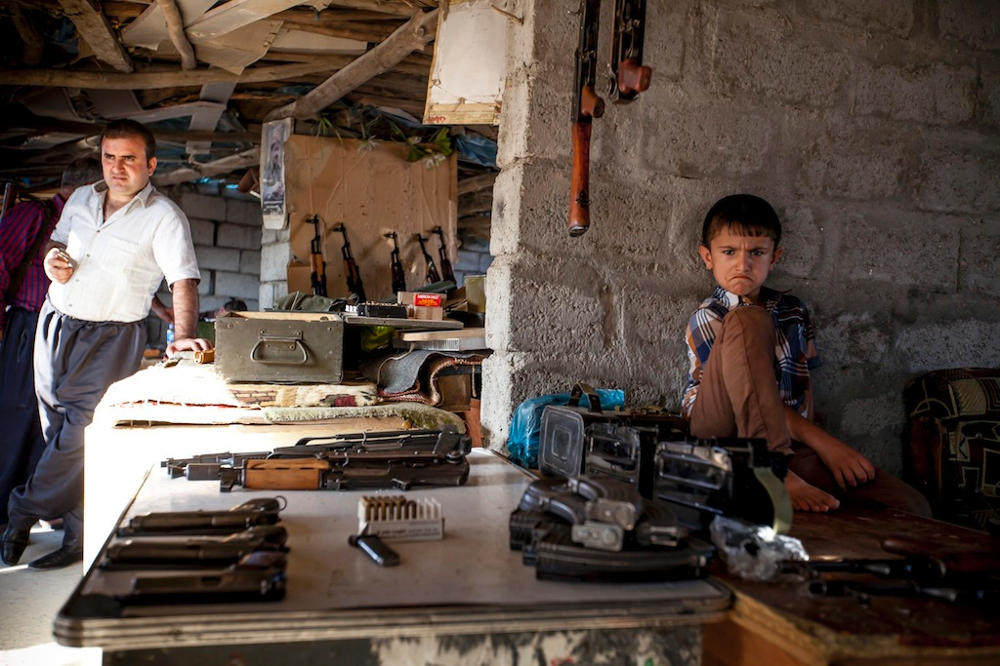 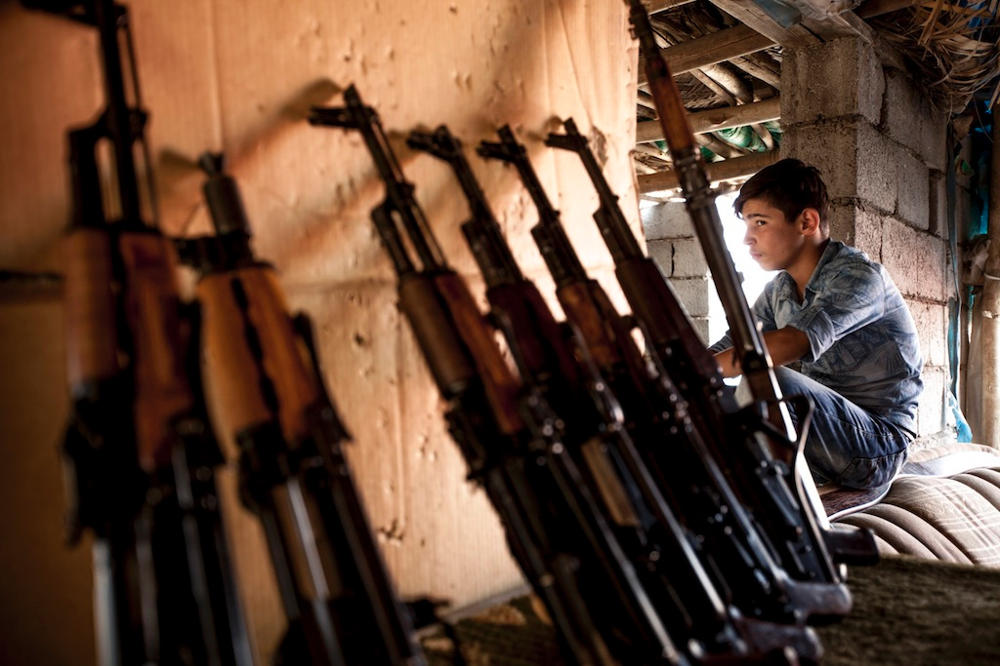 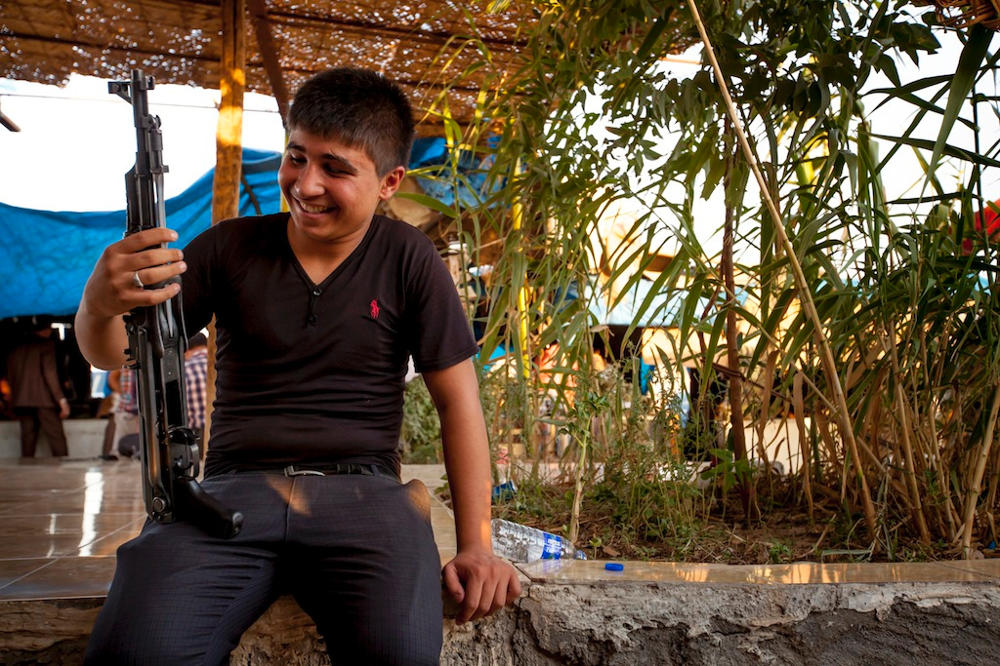 Most of these kids are just that... Kids... but their not fighting for glory... their fighting for their right to live!

"We were fighting off da'esh for 23 hours. They were all high on drugs and behaved like drunk people. Two suicide bombers blew themselves up right in front of our line. Then they charged us over and over again. We killed more than 20 of them." The peshmergas lost 12 men due, Rebwar says, to inferior firepower.

Well Mister Obama... Minister David Cameron...Chancellor Merkel, and all the other's that can make a difference...
What you gonna do to help these folks out, Uha?

On September the 1st the Brits sent their first consignment of Ammo to the Kurds I am happy to say:


Two RAF C-130 Hercules planes made a secret landing in Irbil, the capital of the Kurdish region of Iraq, early this morning to deliver nine tonnes of 7.62mm ammunition for assault rifles, as well as hundreds of sets of body armour, helmets and sleeping bags.
It was the UK’s first delivery of military equipment to forces fighting the IS terrorists, though the UK has delivered aid and non-lethal kit. In other developments:

Not enough,but its a start.
Sounds like a heck ouf a lot of AK rounds,but they need it alright.I hope they get more and bigger materiel from the west soon.They are good people IMO,and we should be helping them-we helped to create this mess after all.

Yup, it's a start...
but it looks like the people of Erbil haven't seen any of that aid yet.
probably just an oversight, over looked and lost in the paperwork.

bureaucracy can be a real bitch ya know.

Lets hope its all been sent to the front(s),so the people in the cities will be better protected.
This will end with westen boots on the ground I think.
I cannot see any other outcome,we are being prepped for it even now all over global mainstream media.

I don't think there is a 'Front"
ISIS got to where they are by being fast and mobile.

As in we've all seen the pictures of their heavy machine guns mounted in the back of pickup trucks.
I've yet to read any real Intel reports on their tactics. though Gen. Martin Dempsey, chairman of the Joint Chiefs of Staff, thinks there nothing more than a localized group of hoodlums, dispite their claim to\

"raise the flag of Allah in the White House."

Our Nations PTB don't seem all that eager to do more than what's already been done...

The Kurd's may be the last true descendant's of the mesopotamian culture's as well as the philistine's and greek's of old, it is not uncommon for them to be born fair haired and with blue, hazel or green eye's though they usually lose light hair as they grow older.

I still remember the Images of the Kurdish villagers lying dead after Saddam gassed them, mother's with baby's in there arm's but they never gave up the fight then either, they are sturdy fighters and determined with only there homeland as a motive and I truly believe if they did have some better fire arms than poor quality AK's and RPG's that they would clean house were the Isi? are concerned but Turkey, Iran, Syria and Iraq have divided there land among themselves and after the current jihadist threat are defeated they will fear a re armed Peshmerga insurgency and call's for them to give up territory to allow the Kurd's to have there own country.

Then there is the Oil in Kurdish territory that is another problem for these people to have to deal with as after it is all said and done everyone will want there oil unless they can make a private deal with some international and powerful conglomerate with first nation backing.

I have the greatest respect for these fighter's, they are fighting for there family's and nation and despite being oppressed for generations they have clung to there land despite lines on international maps drawn by people far away with for a people besieged and persecuted a very much lower rate of exodus to other part's of the world because they would rather stand and fight for there home.

I wish them well in there fight against there heinous enemy.
edit on 6-9-2014 by LABTECH767 because: (no reason given)

posted on Sep, 6 2014 @ 03:00 PM
link
Israel has a been a tradition supplier of weapon for certain Kurdish factions. However the fact to Kurds remain in factions make it harder to arm and train them. And while the Kurds in Syria want a unified Kurdish struggle against IS, Iraqi factions have resisted the idea not wanting to share power upon independence. And of course the West want to becareful not to arm the PKK does not take those weapons back and use them on NATO ally Turkey. The thing to remember about this region of the world is that sides are made up by lots of factions who will unite for a common cause but, also looks for ways to use a crisis as chance to advance their goals. This makes arming and aiding groups much harder than it appears.