A resident of the east side of Elgin said the area looked like a “war zone” after a microburst pelted the area about 2:30 p.m., leaving windows broken at the Hemmens Cultural Center, but no one injured, officials said.

(Edit: I've added my own pictures below)

My friend and I had decided to walk to the gas station about 7 blocks away from his house to get smokes, in the hope that we'd make it back in time to beat the absolutely evil looking cloud quickly approaching the Fox River in Elgin from the west. We were at the counter when the lights started flickering. We left and started jogging back to the house, but made it no more than two blocks before it hit us. And it hit us.

What was minutes ago a calm and humid day had instantly gone black and winds kicked up to 65mph directly at our backs. We were both sprinting out of sheer terror, with drenching rain and cloud-to-ground lightening exploding all around us. We could hear transformers exploding with electric sounds, trees cracking and wrenching all around. We could actually hear the "train whistles" and feel the actual microburst hit behind us...

We ran for what felt like forever, and at one point there was a terrible ripping sound and I looked back to see a huge tree limb lying between my friend and I. It was easily 17ft long and could have definitely killed one of us, had our timing been even a fraction of a second faster or slower, respectively. In the chaos of the moment, I had lost sight of my friend behind the tree -and he of me in front of it- but all I could think (and scream) was "stay away from the trees!" So I started running in the street instead of the sidewalk. The wind was so strong, I was being pushed faster than I could run. I was being hit with debris which almost knocked me down a few times. I actually felt like I was about to die. The wind was just too strong, the lightning was too close and intense and there were trees flying everywhere!

Finally we got back to my friend's house. We were soaked, completely out of breath, and shaking like a couple of leaves. My friend kept apologizing for making us go out there. He kept saying I almost died. All I know is that it is INCREDIBLE that no one was killed or injured in this thing. I have NEVER seen/experienced anything like it. I've never feared for my life in nature before. It was the most terrifying moment of my life thus far.

After the storm we drove around and surveyed the damage. Entire blocks throughout the city were cordoned off. Living trees ripped straight out of the ground and lain across streets, houses, cars, and especially power lines. There was a house on fire, a semi overturned, hundred year old trees laying all over the place. A good 70% of Elgin is still completely without power. Helicopters overhead, police at every intersection... a true state of emergency.

I have taken some photos (see below) and I'm certain there is plenty of coverage of it in the news. I'm grateful we were lucky enough to avoid injury/death, and I still can't believe this happened. This was truly a historic event for the Fox Valley. Once you take a look at the aftermath I'm sure you'll agree. Still getting chills as I'm typing this.... It was that close, and that would have been it for me. Never in my life have I seen weather like that. EVER

Some of my own photos: (and this is nothing) 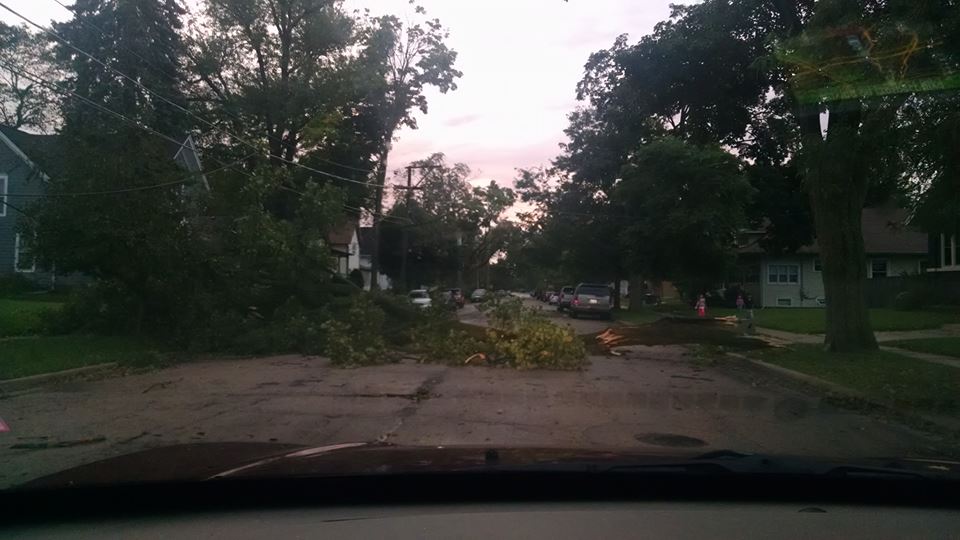 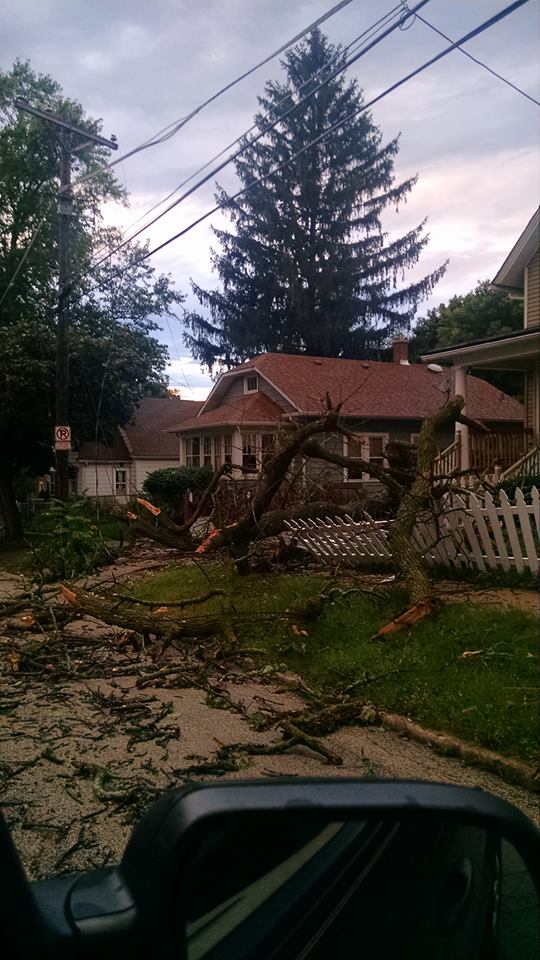 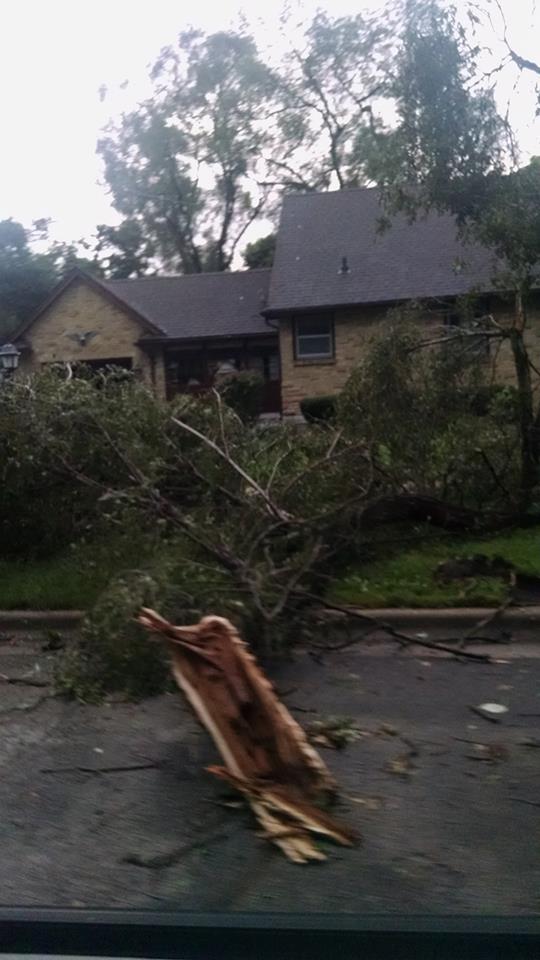 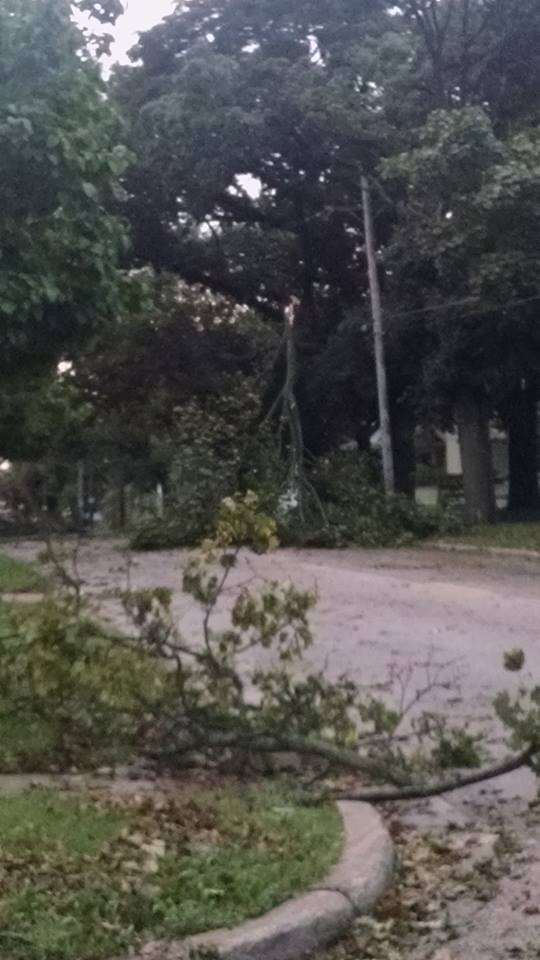 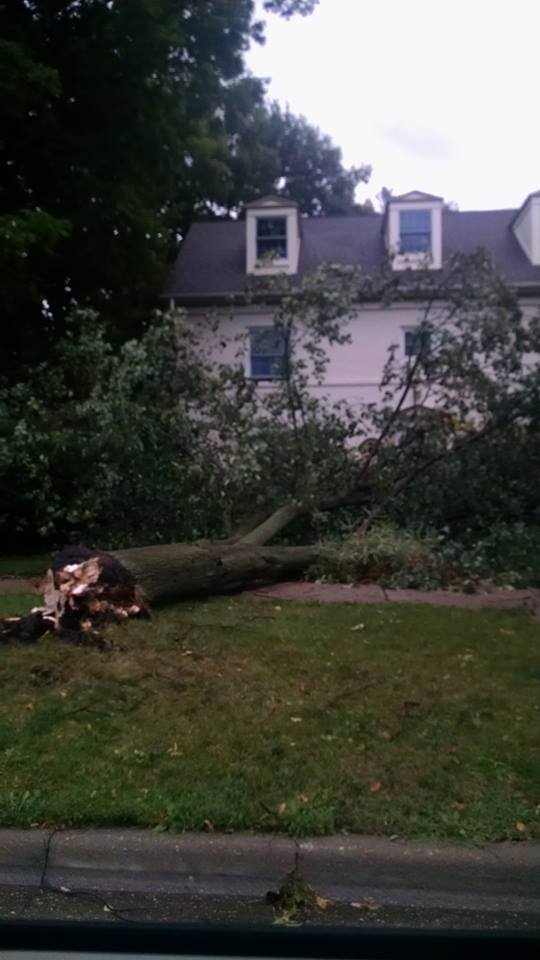 If I had been wearing panties, I would have just thrown them out after that. But luckily I was experiencing some extreme pucker-factor at the time.

Someyhing similar happened to me a few years ago. I was walking beside tge road to a gas station probably a block from my house when a derecho hit and put a small tree down about a foot away. It was so intense that I thought a tornado was imminent so I bolted to the other side of the highway and then jumped down 7 or so feet to hang under a bridge.

The danger was probably that I kinda bolted across the highway in a panic but the storm was probably the most intense ive ever been in without a vehicle.

A relief package of beer and pizza is on it's way.

Indeed, strong drink all around!

And no onions please.

Glad no one was hurt.

Oh its plenty of fun no matter what you're in...

Then it doesn't matter what you're in, it's going to rattle you pretty good.


Yeah, I'd be lying if I said I wasn't scared. I was praying while I was running. I'm not a particularly religious person, but I just kept saying "Jesus please no," between breaths. I'm sore from the sprinting, but yes, we're both fine, and all the better for it.

originally posted by: Gh0stwalker
a reply to: Aqualung2012

I'm inclined to agree. Since "it" has gotten worse, it only stands to reason that it will continue to do so.

Just glad my heart was able to make it through that "initiation."

It may be noteworthy that this morning on my back porch I noticed ants and flies moving together in a strange cluster. Then later I noticed the bizarre clustering again but wasps, ladybugs, and ants on a tree all huddled together... I had even mentioned it to my friend, but since neither of us knew what to make of it, we just over-looked it. Probably nothing, just caught my attention.

Another interesting aspect to the days events was that neither my friend nor myself had ever experienced a microburst before (could hardly even define what one is) but we both knew it was a microburst as it happened. Only later did we read in the news that it actually was.

You are a lucky pair of buggers!

I do not mean that you are lucky to be alive, although by the sounds of it, the hand of fate was upon your shoulders in your survival of this incident. You are however, lucky to have experienced something like that, been there in that moment. I am sure that you cannot deny, despite the terror it caused you at the time, that a part of you has never felt more alive than in those moments when lightning was scouring all around you, when the howling breath of the wind was at your back, when trees and debris were being thrown all about like so many bits of matchwood.

I wish I had been there!

Running down the middle of the street to 'make it home' might not have been your best option.


"Its not that the wind is blowin'…

Its what the wind is blowin'.

If you get hit by a Volvo…" --Ron Satterwhite

posted on Sep, 6 2014 @ 06:09 AM
link
Glad you guys made it safely home! I think someone/something was definitely looking out for you both. I bet you've never run that fast in your life.

On the other hand when I run low on smokes the harp
player Worm gets nervous. He's dug in almost thirty years
now-- way too close to the Devil's Triangle for old trees
that don't look that healthy anyway. There was a parking
lot for Simpson right across the street made by Dundee,
Duncan and Slade Ave's. Fire Station #2 was on the skinny,
where Duncan dumps into Dundee there. Bricks long gone.
Yeah been there trying out the new jets in the BelAir a
million times or two. Done me with a 4-inch branch RIGHT
ON the hood scoop in '73.

Sounds too much like Scorsese..
"You know what a 4.4 can do to a Holley?" Cracked windshield
too, my insurance guy loved me. Just pulled away from Slade
n' Duncan and got Slade'd ROFL. Bleach the seat cushion, and
there's a freebie shaped (DOH) dent in the roof Gary bought in '74.

Back to the thread, and the trees-- now you got me worried.
I need to shoot him and Diane an email to see if they're out
by Monday... because a few of the oaks still peppering that asphalt
slab are older than Jimmy Page's closet door. I came within about
two feet of being an Allstate commercial myself.
BTW glad the nicotine monkeys made it home ok

My friend and I had decided to walk to the gas station about 7 blocks away from his house to get smokes, in the hope that we'd make it back in time to beat the absolutely evil looking cloud....

If the storm didn't kill you, the cigarettes will.

posted on Sep, 6 2014 @ 06:47 AM
link
I'm in the Chicago area too but totally missed the storm. One of the things I noticed and actually thought about doing a thread is that major storms seem to be either going to the North or South and not directly hitting downtown. It's so strange. I know once they hit the lake many time the will either pick up or die down but I'm see it change course about 50 miles before downtown.

As a side note, it's amazing how many close calls people have and live to tell about it. There was a huge thread about it a few years back. There's a theory out there that people actually do die but the time line gets resets (like in a video game) so they can finish their life. So maybe you and your friend actually did die.

posted on Sep, 6 2014 @ 07:13 AM
link
Just used this pic on another thread, and thought it'd be appropriate here too. Glad you escaped the wrath of Khan or whomever. Did you think of running into the space between two houses, or under someone's porch for the duration? Seems a long way to run in this kind of weather without taking shelter. Here's the pic, taken by someone in Elgin with a cell phone: 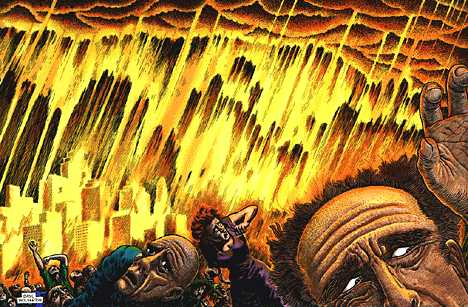