posted on Sep, 6 2014 @ 02:30 AM
link
A few of you may remember this thread Beautiful Rare Blue Lobster Caught In Maine that I started a little over a week ago. The odds of finding a blue lobster are insane. So much so, that I made the comment that I would probably buy a lottery ticket on my way home if I had caught it myself.

So what are the odds of finding two albino lobsters and one yellow lobster in just one week?? Read on to find out... and yes... I would have went for a lottery ticket on this occasion as well.

I don't live in Maine, but judging from the odds in the article, this doesn't happen on a daily basis. I find these just as beautiful as the blue lobster I shared a while back. Two different guys on two different days is pretty nifty.

OWLS HEAD, Maine (AP) — It's no white lie: Two lobstermen in Maine caught a pair of rare albino lobsters within a week.

The Portland Press Herald reports (http://(link tracking not allowed)/1qlk6Dn) Bret Philbrick caught the curious crustacean off of Owls Head on Thursday and Joe Bates caught one off the Rockland breakwater days earlier. Albino lobsters are believed to be about one in 100 million.

The lobsters are in a crate at Owls Head Lobster Co. One will go to the Maine State Aquarium in Boothbay Harbor and the other to Brooks Trap Mill in Thomaston. The lobsters are under legal size and would normally have to be returned to the ocean but the Marine Patrol made an exception. 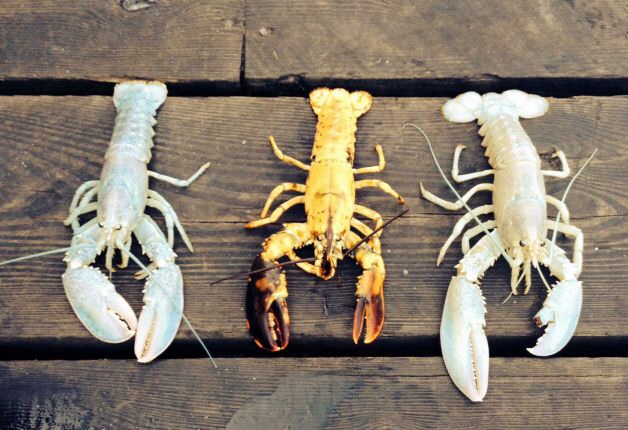 I've never seen a yellow lobster and I suppose it surprises me as much as the albinos do because it's common knowledge that albinos exist in every living being/animal, but I've yet to run across a yellow lobster. I put that with the blue one and I can start a sort of Crayola collection of sea life.

Once again, I had to share and once again I am glad that all lobsters involved will be getting a reprieve of sorts. They will get to live out their lives behind glass with huge earth children eyeballs staring at them incessantly.

I'm not sure that would be better than dying sooner because you can't camouflage yourself as well or not. I guess I can only speculate as to what the lobsters would prefer if they had a say.

I don't factually know if this is occurring more than usual lately so I will leave that to those who would wonder and speculate about the "why's" of it if it is applicable here.

Nature is a beautiful thing indeed!!

Pretty though. I wonder also if they turn a different color once boiled?

originally posted by: Biigs
as rare as they are....

Pretty though. I wonder also if they turn a different color once boiled?

I do not like to eat anything that comes out of the water Sam I Am so I have no clue.

I've never been able to stomach fish/seafood. I am betting that someone would pay a few hard earned bucks to find out though. It's a thought I had not thought of.


If the Red ones turn bright pink, these must start to glow!

Shame you cant stomach seafood, some is simply stunning and some fish doesnt even really taste like fish, like swordfish steak.

posted on Sep, 6 2014 @ 04:36 AM
link
Those lobsters should have been put back in the sea in the hope that they would breed more strange lobsters.


If the Red ones turn bright pink, these must start to glow!

Shame you cant stomach seafood, some is simply stunning and some fish doesnt even really taste like fish, like swordfish steak.

They might become so bright they glow in the dark!!

I know it's a shame. Seafood and fish is so healthy for you. I am 37 and I will still try shrimp and bits of fish at least once a year in hopes that my tastes will change and I will like it. I come from a family that loves to fish. I love to fish. My husband loves to fish... I just can't tolerate eating it. I can't even cook it in my house. When the husband wants fish for dinner, we go out for it. I really think it's the smell more than the actual taste of it that leaves me almost nauseated.

That reminded me of Scooby Doo lol.

I can't believe I don't like it either. It's like I told Biigs. I still make an effort on occasion to eat it, it just hasn't worked out so well yet. Maybe one day...

originally posted by: pikestaff
Those lobsters should have been put back in the sea in the hope that they would breed more strange lobsters.

I normally would agree 100%, but I do think they will live longer out of the wild. When an animal can't camouflage itself well, it tends to get eaten quicker than the others. Or shot in the case of deer and the like. We had a beautiful button buck here a few years back that was snow white except for one perfectly round circle of brown on his belly. I saw him nearly every morning leaving the house and I just knew someone was going to kill it just so they could mount the head.

He did disappear shortly thereafter and I kind of missed seeing him every morning. I think all animals should be left out in the world if it's possible. Zoos are some of the saddest places I've ever been I think just because the animals never look happy no matter how good they have it. There's really no good way to fake nature.
edit on 9/6/2014 by Kangaruex4Ewe because: (no reason given)

If only cows swam in the sea imagine how tasty they would be !!!!!

originally posted by: Kangaruex4Ewe
I really think it's the smell more than the actual taste of it that leaves me almost nauseated.


I know EXACTLY what you mean.

But the smell of it cooking makes me wrech, i can hardly even be in the same house when its cooking - when the rest of the family would have a lamb roast id have my own beef steak or pork chop instead. (and the temptation to put a peg on my nose). 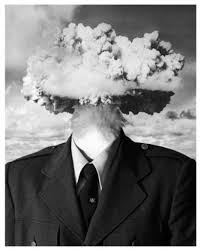 posted on Sep, 6 2014 @ 05:59 AM
link
The genetic damage and resulting mutations from the BP spill will be a lot harder to hide from the public than what happened in the less populated area of the Exxon Valdez oil spill in Alaska.

As beautiful as these mutations are, they strike a sense of deep sadness as their occurrence becomes more common place. I have to wonder if we're watching de-evolution in fast-forward!

Manatees and their close relatives are known as 'Sea Cows'. Here ya' go: www.marinewildlife.org/manateeReintroduction.php

"Their meat is considered highly edible, the color of beef, but tasting more like pork. The bodies are high in fat, which the pirates used to melt and keep in earthen pots as a cooking oil."

posted on Sep, 6 2014 @ 06:34 AM
link
I can't help but wonder if Fukishima radiation has played a part in coloring these lobsters.

posted on Sep, 6 2014 @ 07:31 AM
link
They look like plastic. What kind of chemicals are they dumping into the sewers out there?

You do know that Maine is a not in the Gulf of Mexico and that these are naturally occurring, albeit rare, colors?

No, there have been reports of variously colored lobsters for hundreds of years.

posted on Sep, 6 2014 @ 08:46 AM
link
Wow those are beautiful, next i'd like to see a purple one haha. This reminds me of the time I held a glowing blue crab!
I know of the Chesapeake blue crab, but this was way more vivid in color all around.

I was 8 years old when I was at the Long Island sound, about 200 yards out into the lowest tide i've ever seen.

I cupped my hands into the water and noticed I had found something slightly glowing and blue with many legs. It also seemed slightly transparent. I have severe arachnophobia so by instinct I chucked it pretty far.. lol.
Only in that split second had I realized what I found. It was just a baby
For the next 10 minutes I was hopelessly splashing around, looking for another 'glowing blue' crab to show my parents.

posted on Sep, 6 2014 @ 09:22 AM
link
MMMmmmmmmmmmmmmmm
Lobster. The white ones are cool. Does that make me a racist?
I think they might want to readjust their figures on rarity.

They are cool to look at, the Pittsburgh Zoo, about 60 miles from here has a big blue lobster.
It's always nice to see an animal, same as you've seen countless times, just a little bit different though. Years ago there was a set of albino twin deer fawns close to my house, you could often see them together in the fields on the way to work. Its been a years since they disappeared.