The Battle of the Tooth Worm

posted on Sep, 5 2014 @ 04:07 PM
link
Following on from yesterday's thread about Tibetan carved skulls here, today i have a gem about a carved tooth.
This piece of art is titled ‘The Tooth Worm as Hell’s Demon.’ It was created in the 18th century by an unknown artist, and is carved from ivory. It is an incredibly intricate piece when you consider it only stands a little over 4 inches tall. The two halves open up to reveal a scene about the infernal torments of a toothache depicted as a battle with the tooth worm, complete with mini skulls, hellfire, and naked humans wielding clubs. 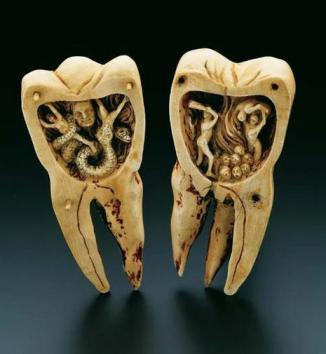 This is a depiction of the infamous tooth worm believed by many people in the past to bore holes in human teeth and cause toothaches.
Tooth worms have a long history, first appearing in a Sumerian text around 5,000 BC. References to tooth worms can be found in China, Egypt and India long before the belief finally takes root (pun intended) into Western Europe in the 8th century.

Treatment of tooth worms varied depending on the severity of the patient’s pain. Often, practitioners would try to ‘smoke’ the worm out by heating a mixture of beeswax and henbane seed on a piece of iron and directing the fumes into the cavity with a funnel. Afterwards, the hole was filled with powered henbane seed and gum mastic. This may have provided temporary relief given the fact that henbane is a mild narcotic. Many times, though, the achy tooth had to be removed altogether. Some tooth-pullers mistook nerves for tooth worms, and extracted both the tooth and the nerve in what was certainly an extremely painful procedure in a period before anaesthetics 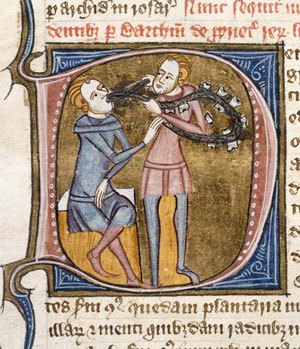 The tooth worm came under attack in the 18th century when Pierre Fauchard—known today as the father of modern dentistry—posited that tooth decay was linked to sugar consumption and not little creatures burrowing inside the tooth. In the 1890s, W.D. Miller took this idea a step further, and discovered through a series of experiments that bacteria living inside the mouth produced acids that dissolved tooth enamel when in the presence of fermentable carbohydrates.

A Sumerian text from 5000 BC describes a "tooth worm" as the cause of caries.[103] Evidence of this belief has also been found in India, Egypt, Japan, and China.[100] Unearthed ancient skulls show evidence of primitive dental work. In Pakistan, teeth dating from around 5500 BC to 7000 BC show nearly perfect holes from primitive dental drills.[104] The Ebers Papyrus, an Egyptian text from 1550 BC, mentions diseases of teeth.[103] During the Sargonid dynasty of Assyria during 668 to 626 BC, writings from the king's physician specify the need to extract a tooth due to spreading inflammation.[100] In the Roman Empire, wider consumption of cooked foods led to a small increase in caries prevalence.[97] The Greco-Roman civilization, in addition to the Egyptian, had treatments for pain resulting from caries.[100] The rate of caries remained low through the Bronze Age and Iron Age, but sharply increased during the Middle Ages.[99] Periodic increases in caries prevalence had been small in comparison to the 1000 AD increase, when sugar cane became more accessible to the Western world. Treatment consisted mainly of herbal remedies and charms, but sometimes also included bloodletting.[105] The barber surgeons of the time provided services that included tooth extractions.[100] Learning their training from apprenticeships, these health providers were quite successful in ending tooth pain and likely prevented systemic spread of infections in many cases. Among Roman Catholics, prayers to Saint Apollonia, the patroness of dentistry, were meant to heal pain derived from tooth infection.[106] There is also evidence of caries increase in North American Indians after contact with colonizing Europeans. Before colonization, North American Indians subsisted on hunter-gatherer diets, but afterwards there was a greater reliance on maize agriculture, which made these groups more susceptible to caries.[99] During the European Age of Enlightenment, the belief that a "tooth worm" caused caries was also no longer accepted in the European medical community.[107] Pierre Fauchard, known as the father of modern dentistry, was one of the first to reject the idea that worms caused tooth decay and noted that sugar was detrimental to the teeth and gingiva.[108] In 1850, another sharp increase in the prevalence of caries occurred and is believed to be a result of widespread diet changes.[100] Prior to this time, cervical caries was the most frequent type of caries, but increased availability of sugar cane, refined flour, bread, and sweetened tea corresponded with a greater number of pit and fissure caries.

There you have it folks, The Tooth Worm.
I sure wouldnt have liked to have a tooth cavity a few hundred years ago....

posted on Sep, 5 2014 @ 04:22 PM
link
This is probably the worst from 2100 years ago. Poor guy had two decayed teeth with the cavity going all the way into the bone. The dentist at the time could only insert a packing sealed with resin.

posted on Sep, 5 2014 @ 05:48 PM
link
I hate tooth worms! Hurt like a real bastard, Eventually though they give up and move away. Though now I can afford to have them evicted promptly.