posted on Sep, 5 2014 @ 09:54 AM
link
It appears that ISIS is having inner conflicts and many fighters are fed up with fighting other radical factions rather than their original fight to eliminate Assad. This, along with U.S. intervention could be the demise of ISIS. Once considered a huge threat, ISIS is now breaking up, but the fighters are afraid to come home. 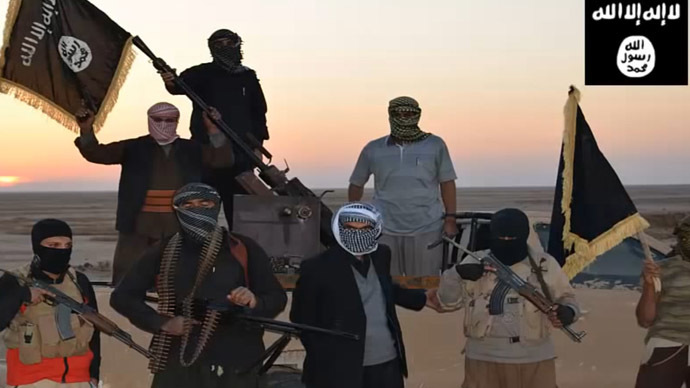 
British jihadists in Syria are becoming increasingly disenchanted with their military pursuits in the region and wish to return to their homeland, it has emerged. The jihadists have reportedly grown frustrated that they are no longer fighting against President Assad’s military forces, but rather are engaged in attacks against rival rebel factions. Dozens of British men fighting in the war-torn state reportedly wish to return to British soil but are fearful they will be imprisoned if they attempt to do so, the Times reports. One jihadist, who claims to represent 30 British militants fighting for a group with links to the Islamic State (IS, formerly ISIS), said the men are willing to undergo a process of deradicalization and submit to state surveillance if they are guaranteed freedom on their return.


Awwwe! I feel so bad for them.

Isn't it a shame... They made a decision, now they have to live with it.
They better not be too vocal about it though. The ISIS fighters that already in their homeland might not take pity on them... they might take their heads for trying to abandon the jihad!

JHumm
+27 more
posted on Sep, 5 2014 @ 10:03 AM
link
Just because they changed their minds and don't want to fight anymore doesn't change the fact that they signed up for the "cause" and probably had their hands in some sort of war crimes and now they want a free pass to come home? I don't think so.

originally posted by: abe froman
You don't get to come home. You made your bed...now die in it.

posted on Sep, 5 2014 @ 10:09 AM
link
I was thinking about this the other day. There's a story in the Scottish papers just now about a young woman who has gone to Syria to fight. She's only 20.
She was born and raised in Scotland - she's Scottish in other words, although her parents were both born in Pakistan (I believe).
They have been on the news saying how devastated they feel, how she has let down the people of Scotland, how angry and ashamed they are of her - and how frightened they are for her welfare.

I feel for them, they must be going though hell.

But what happens on the morning after? Do we just turn our backs on her, and refuse to allow her to come home? She's only 20 years old, I doubt very much she has much of a clue what she has got herself into.
Surely we have to begin a conversation with people like this, because alienating them further is not going to benefit either side in the long run.

originally posted by: abe froman
You don't get to come home. You made your bed...now die in it.

You would think these guys would be hard core and ready to die for ISIS regardless of the situation. Al Qaeda might actually be a tougher group after all. They don't tuck tail and run so soon. All that talk about ISIS being a bigger threat than Al Qaeda must have been wrong.

Expat888
+6 more
posted on Sep, 5 2014 @ 10:20 AM
link
One case where best option would be terminate the entire lot of them with extreme prejudice.. rid the world of some of the murdering bastards in it.

Idiots, who would trust them?


Do we just turn our backs on her, and refuse to allow her to come home?

Why yes, yes we do, ridiculous to mollycoddle these people

posted on Sep, 5 2014 @ 10:26 AM
link
I'll bet 85% of ALL of these Jihadists feel the same JUST BEFORE they die.
WE just complete the MISSION,die ,live whatever.
Assassins and thieves have nothing to value only destruction and power are their reward.

posted on Sep, 5 2014 @ 10:29 AM
link
Seals and SAS should eliminate all ISIS members.Period.After a year World will remember ISIS like a bad dream, i hope.

Expat888
+12 more
posted on Sep, 5 2014 @ 10:33 AM
link
a reply to: beansidhe
As much as I loathe war and violence .. these things ( they dont deserve to be called human ) showed no mercy .. compassion or sympathy for their victims just murdered them in cold blood because they didnt believe their primitive barbaric superstition ..
There is no place in this world for things that act like that and commit the atrocities they have...


Why yes, yes we do, ridiculous to mollycoddle these people

She's Scottish, born and bred here. A couple of years ago she was a school girl.
We had this, years ago, with the IRA, the UVF and the rest. The only thing that works is talking. Bombing and murder is bombing and murder irrespective of whose side you're on, who is 'right' and who is 'wrong'. There are no winners that way, no peace. Only more murder, more retaliation, more death.

Revenge might feel good for a while but it doesn't do any good in the long run. I know that's not a popular view, but we need to ask ourselves if we want peace or if we want to 'win'.

They went over there thinking they were fighting for God.

I have compassion for young people making mistakes.

But, this was a big mistake...Not sure I want them in my neighborhood.

For these people the gift of hindsight will become a curse.

If they had used logic beforehand they wouldn't be in the predicament that they find themselves in. Now they can't return home for fear of incarceration, and they can't stick with ISIS for fear of death.

These people ran blindly into a mine field before looking for mines, and now they are looking to others to guide them out and they won't get out without losing a leg or two; even if they were to cooperate they'd still be marched to the old bailey and they'd have the book thrown at them.

Ah....starting to realize they are the patsies, are they?

posted on Sep, 5 2014 @ 10:46 AM
link
Good !
If they're afraid to come back that's fine cause guess what .... we don't want then back and they shouldn't be allowed back.
If they want to go play soldier then join the British Army.

posted on Sep, 5 2014 @ 10:48 AM
link
Tough life... Hope they are told to stay where they are and I hope my government do the exact same thing when the Australia scum start crying to comeback home. We don't need these people in our countries, i would hate too think of what they done to innocent people somewhere down the track.

I wonder how much compassion she showed others, i hate to be harsh and I am a pacifist, and I don't know what she was involved in, but they showed no compassion to the innocent people they raped and crucified , buried alive, and beheaded, innocent women and children.

Let her stay there