posted on Sep, 5 2014 @ 09:27 AM
link
The elimination of people like Gaddafi and Saddam have left a power vacuum for jihadist to fill in. I don't just blame Obama, but also the Bush administration and the New World Order agenda to destabilize all of these countries in the interest of seizing control of natural resources in the area. The Saudis have been our oil masters and play a huge role in these wars behind the scenes. Question is, is this in the best interest of the United States, or is it in the best interest of a few rich bankers, politicians and oil tycoons?

These jihadist are running around with U.S. weapons that have been supplied to so called moderate rebels during the Arab Uprising and stashes that they found in Benghazi. We hear rumors of airliners that have been seized by ISIS in Libya.
Airliners missing
Airliners Missing

Yet, we don't know much about these missing airliners and corporate media hasn't said much at all.

We see these beheading videos from ISIS that don't show the actual beheading. I remember watching Al Qaeda videos and the people they beheaded were always terrified and there voices trembled. You don't see this with the ISIS victims. ISIS, a group that cuts 5 year olds in half in front of their parents, slaughters hundreds at once and crucifies people on crosses, but won't show a entire clip of a beheading? Something is definitely not right here. 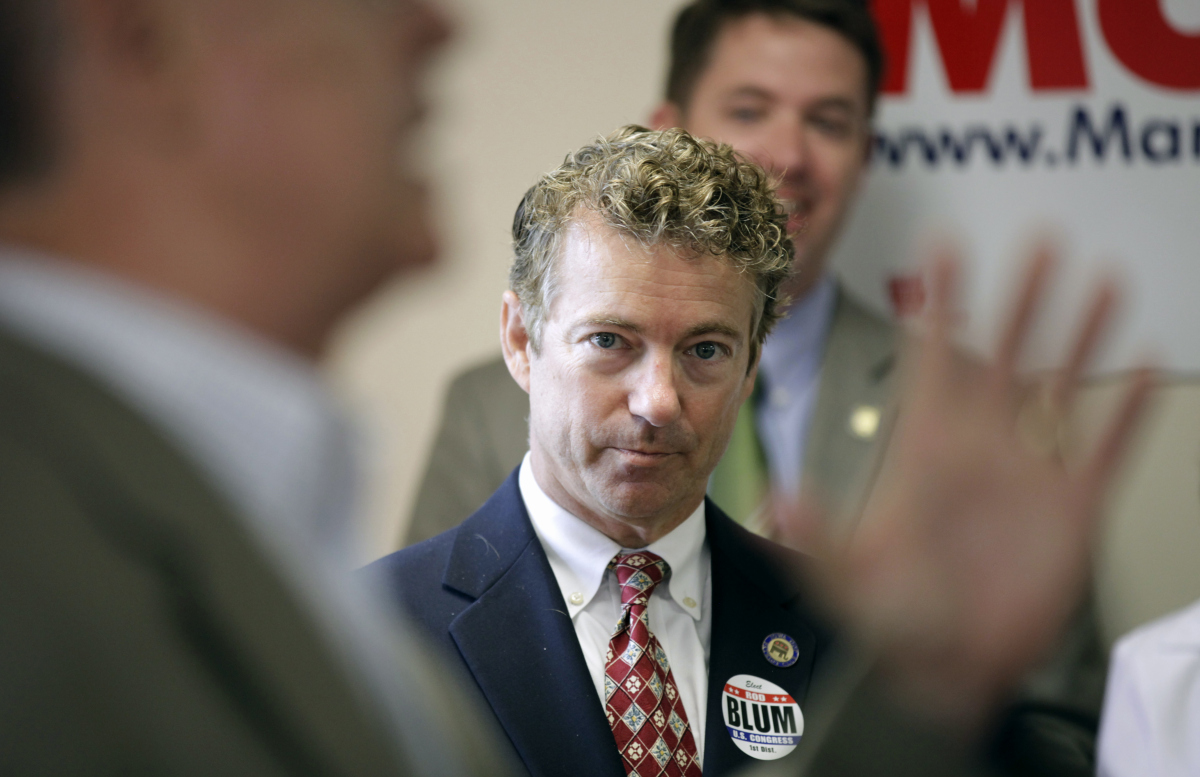 
If I had been in President Obama's shoes, I would have acted more decisively and strongly against ISIS RECOMMENDED FOR YOU Sarah Silverman Brought Liquid THC to the Emmys Paul Ryan Explains What Happens When He Visits Urban Black Communities Why Iraq’s Kurds haven’t seceded yet by Taboola Some pundits are surprised that I support destroying the Islamic State in Iraq and Greater Syria (ISIS) militarily. They shouldn’t be. I’ve said since I began public life that I am not an isolationist, nor am I an interventionist.

I look at the world, and consider war, realistically and constitutionally. More California Set to Enact First Statewide Ban of Plastic BagsPakistani Protesters Storm State TV Station as Fresh Clashes Erupt'Meet' the President: What to Watch for in Obama's Interview NBC News'Talk About Guts': Comedy Icons Toast a Fearless Pioneer NBC NewsComedy and TV Pioneer Joan Rivers Dies at 81 NBC News I still see war as the last resort. But I agree with Reagan’s idea that no country should mistake U.S. reluctance for war for a lack of resolve. Popular Among Subscribers Eat Butter Fat Time Magazine Cover The Second Age of Reason Subscribe Maroon 5 Falls Off the Bandwagon Are You Smarter Than a Teenager?

As Commander-in-Chief, I would not allow our enemies to kill our citizens or our ambassadors. “Peace through Strength” only works if you have and show strength. Our recent foreign policy has allowed radical jihadists to proliferate. Today, there are more terrorists groups than there were before 9/11, most notably ISIS. After all the sacrifice in Afghanistan and Iraq, why do we find ourselves in a more dangerous world? And why, after six years, does President Obama lack a strategy to deal with threats like ISIS? 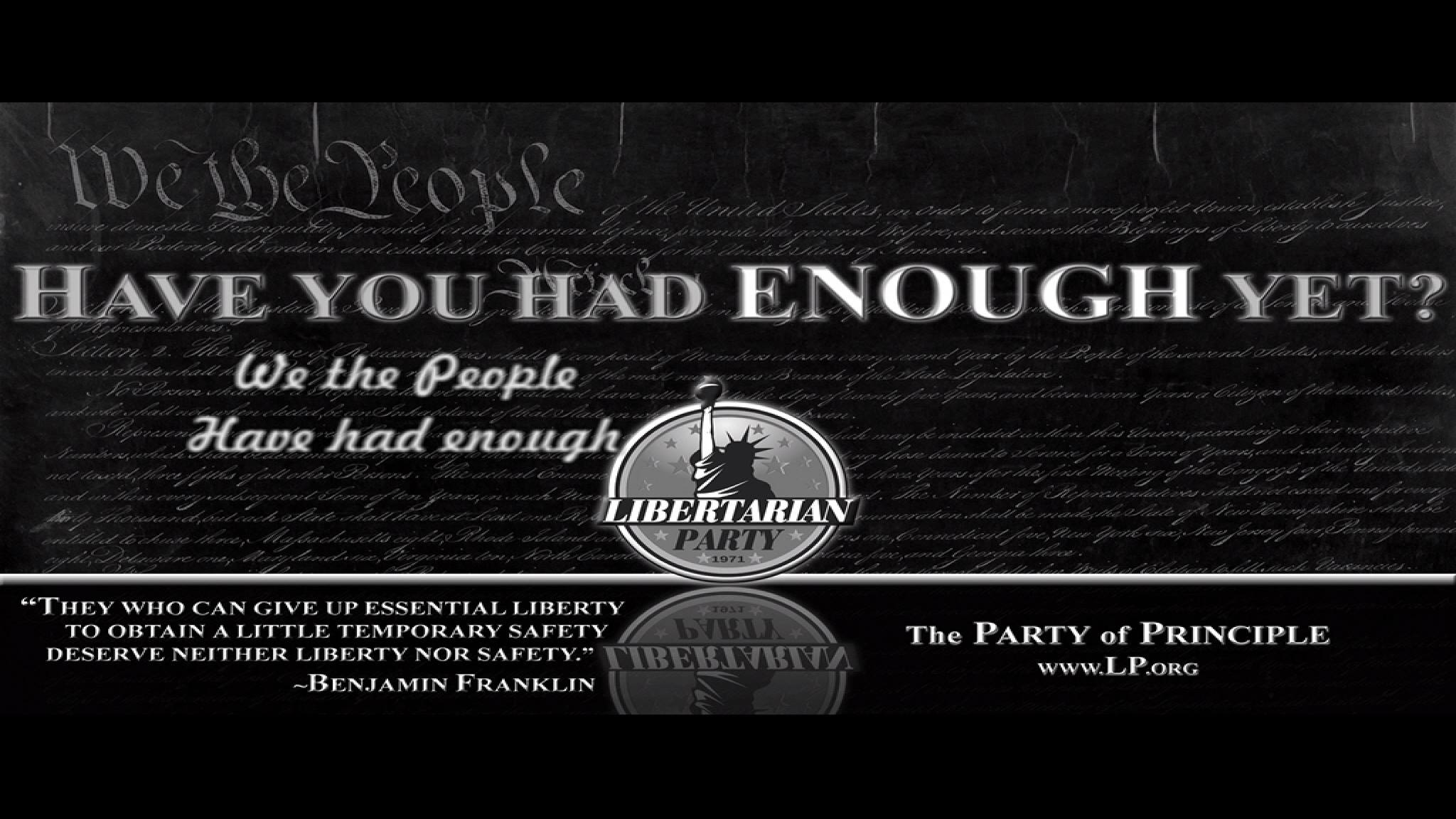 Now I looked around for another source but all link back to CP!!!
They say

Claiming Muhammad or Islam is peaceful is like claiming a toddler has won the Tour de France.


As for Rand Paul saying this and that...
He hasn't been in "Obama's shoes" & therefore has no idea what he would do...

He can claim whatever he likes...
He isn't in a position to say what would occur!!! 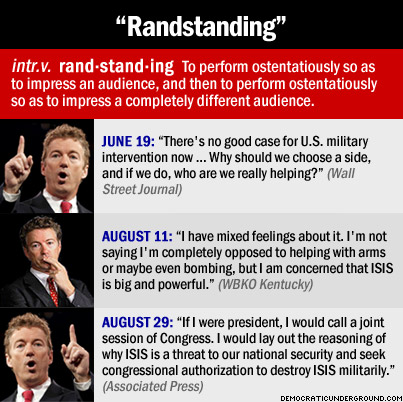 originally posted by: Blackmarketeer
Rand Paul's opinion changes depending on who he's talking to.

So true. I'm a fan of his father myself.

I really have no doubts that they are capable of such acts.

Then why didn't they kill everybody in the church...
Instead they let them flee the area...

Sorry but I'm a Taurus & I can sense Bull!

posted on Sep, 5 2014 @ 10:01 AM
link
Last time I checked, Rand Paul was a Republican. This op-ed doesn't do anything to define any actual policy positions — let alone a strategy — it's all just ambiguous double-talk.

posted on Sep, 5 2014 @ 10:02 AM
link
Talking about the apple falling far from the tree. Rand is nothing like his father and has become a complete sellout. This was maybe his most ignorant statement in the article.

Our recent foreign policy has allowed radical jihadists to proliferate.

He has become so stupid to realize that it was our nations old foreign policy that allowed the Jihadists to come to power. The ignorant nation builders of the past removed from power the people that was keeping these killers from rising to power. Yes they were brutal but weren't they simply doing the same thing this chickenhawk wants to do. These groups like ISIS would have never risen to power if Saddam wasn't taken out and it was the attempt to remove Assad from power that gave these groups the financing and weapons. So had America just minded our own business a lot of this crap wouldn't be going on in the ME.

posted on Sep, 5 2014 @ 10:26 AM
link
a reply to: buster2010
A bit extreme imo
Informing the public of a govt gone rogue should take precedent over a statement taken out of context,
hardly stupid.

originally posted by: theantediluvian
Last time I checked, Rand Paul was a Republican. This op-ed doesn't do anything to define any actual policy positions — let alone a strategy — it's all just ambiguous double-talk.

Rand Paul is a huge disappointment in my opinion. His father is so much more of valuable asset to politics and really presses the real issues. Rand is more of the typical sell out politician that just wants the masses to vote him in and is willing to change his morals and values to achieve that.

Rand is working within the System which requires things his Dad would not do.

I have a few issues with Rand. However, I think he is 1000 times better than anyone else.

posted on Sep, 5 2014 @ 11:18 AM
link
a reply to: whyamIhere
Ron Paul is far from a crackpot
he has brought more truth to light than any other Governor in recent memory.

posted on Sep, 5 2014 @ 11:51 AM
link
Sadly while Rand Paul is bashed for bashing the Obama administration and never will be compare to his father's shoes he does hold some truth to his statements

I will take Buster2010 line

Our recent foreign policy has allowed radical jihadists to proliferate

, yes is some truth to this statement regardless of difference of opinions about Obama.

From the beginning and under the Obama administration "watchful eye" we have seen terrorism expand and take over Areas in Iraq and Syria.

A nation like the US that vowed to fight terrorism and wag a war on terror is actually coming short on its commitment Under Obama, that seems no very interested on what is going on in the middle east when he actually acknowledge that our nation have not strategy under his administration, I find that ridiculous and stupid, signaling the enemies in the middle east that our president has not backbone

Then the emboldened terrorist states shows the world that when it comes to the US they are not worry about repercussions at least under Obama, taking the US Embassy in Libya and touring the remaining compound like tourist, that once housed US diplomat.

Sorry but Rand Paul is right on this one.

His father was deemed a crackpot by mainstream Republican's initially, but he picked up more and more support as the years went by and his policies looked better and better. Rand would be doing a lot better if he stuck with them. Stability in the middle east is going to come from people in the middle east. When he talks about sending US troops in rather than supporting local people to take care of the problem, he's talking about something more expensive in terms of tax payer dollars than what even Obama is talking about, and that undermines the long term Paul message of small government.

originally posted by: whyamIhere
His Father was deemed a crackpot and a complete joke.

Rand is working within the System which requires things his Dad would not do.

I have a few issues with Rand. However, I think he is 1000 times better than anyone else.

His position on this is 1000 times better than his Dad's.
He would get more votes than pops easily if he keeps this up.

You probably were one of the few posters here on ATS who actually read and committed to memory
my prognostication (in various threads in the past couple months) that :

Øbama will retire in 2017 to his Hawaii estate... but will accept the position of the Caliph when offered ...to replace either the IS leader or to lead the Turkish Caliphate which will overtake ISIS and become the overarching Global Caliphate the Muslims desire.

originally posted by: FearYourMind
The elimination of people like Gaddafi and Saddam have left a power vacuum for jihadist to fill in.

Geeeez, that is what we said in 2002, American logic did not grasp it then..


Rand Paul's opinion changes depending on who he's talking to.

So does the 'fearless empty chair in chief'.

That can't decide if he wants to arms terrorists(Syria) give them money ( Egypts muslim brotherhood, and Hamas)

Or trade 5 terrorists for one deserter or fight them (current airstrikes in Iraq).

So the point was?

This golden nugget from the DAILY PAUL.

Rand is right, he has to Stop Obama's creation which is ISIS before the NWO can use them as a boogyman to invade other countries.

Obviously Obama doesn't want to kill his Frankenstein. THis is the perfect way to justify war.