page: 1
21
log in
join
share:
SecretKnowledge
+3 more
posted on Sep, 4 2014 @ 05:36 PM
link
Came across this beauty today, what a piece of work!
Its full of symbols, on the left hand side there are 4 goat-heads coming out of a 3 stepped platform.
Dancing skeletons, deer, goats, snakes...
Apparently skulls like this were carved to take a curse off a family, or to guide a soul on the right path.


Got this skull in march 2011 from an antiques shop in Vienna, Austria. Showed it to several experts and organizations, such as the Institute for Tibetan and Buddhistic Studies in Vienna, the Museum of Natural History Vienna and the V�lkerkunde Museum. The Tibetan letters and most of the symbols got deciphered, but no one ever heard of a skull like that. Except one Tibetan Khenpo (Monk-Professor), who said such skulls where carved a long time ago to take a curse off a family or to guide the soul of a mislead human being on the right path. The guy who sold it to the auction house where the antiques shop got it from said that one of his ancestors used to be a medical doctor in vienna. He travelled around Tibet and also gave medical treatment to an abbot of a buddhist monastery. That abbot gave the skull amongst other relics to that doctor as a reward for his services . Allegedly around 300 years old. 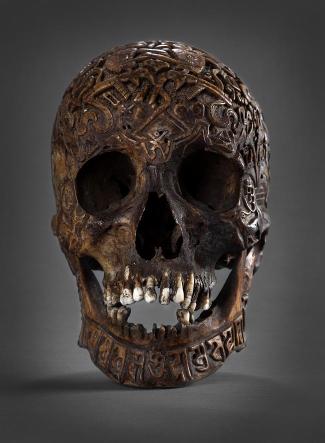 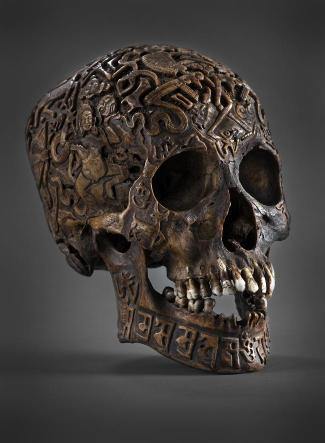 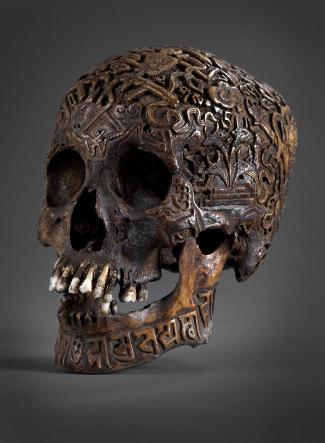 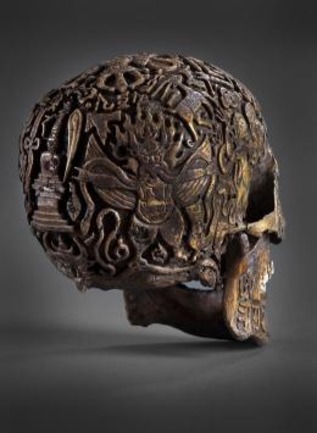 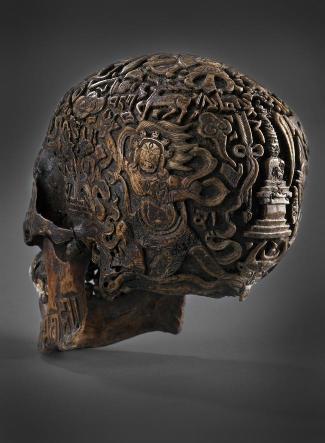 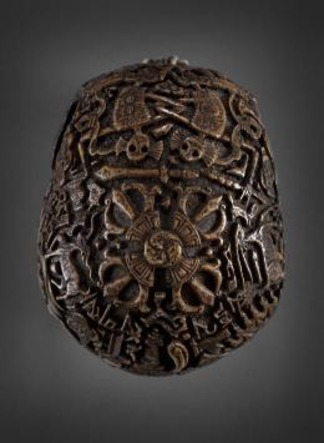 In the next picture we can see The Cittipati, Lords of the Graveyard, they are depicted in the "bow and arrow"-posture, which is referring to the highest grade of the outer tantra. 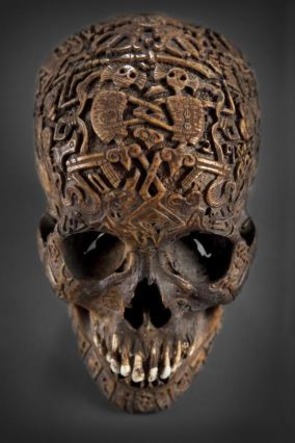 The only thing i could find out about the letters on the jaw are that they are in Devanagari script.
Here's a couple more, 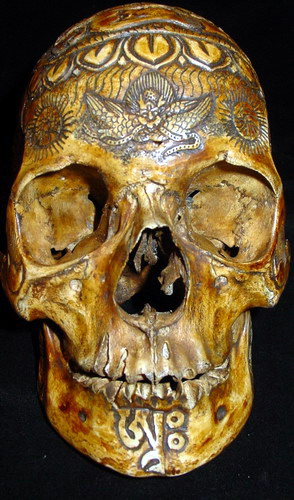 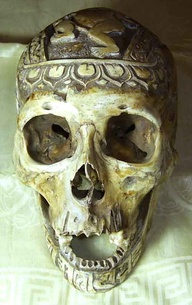 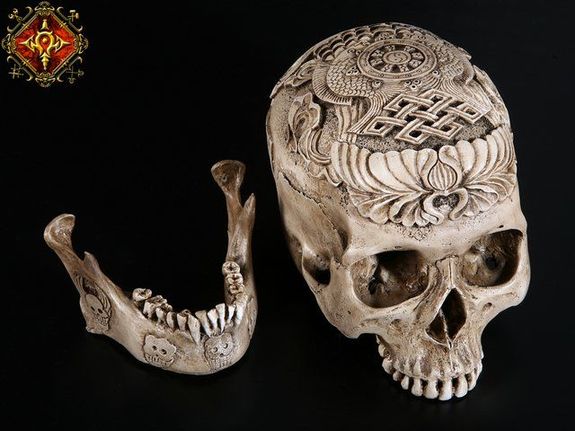 So there you have them, Tibetan engraved skulls.

Wow I wonder If when I die I can get an artist to do the same with my noggin .
Wonderful stuff...oh and them birds make me jump in your sig lol....every ruddy time .

Wow... this gave me a great idea. I'm going to have my body cremated for sure but... if they could do this with my skull, they could totally use it as an urn for the ashes!

Thank you greatly for sharing this SecretKnowledge! Those images are exceptional. I've never heard of this practice, and now you've given me something else to look into.

posted on Sep, 4 2014 @ 07:50 PM
link
Those are amazing! makes me want afew maybe start a collection, and once I pass on I'll pay to have mine done like this and added to the collection! Pass it on for afew generations!

I'm going to have to change my name to Bonecarver. It has a nice ring to it. And nobody effs with a guy named Bonecarver.

Apparently a lot of countries have a human remains act for body parts that are less than 100 years old. Older remains can be seen as antiquitities especially if they have any artistic value.
In Buddism death is nothing scary and is a normal part of life, they dont go by the 100 year law
edit on 4/9/14 by SecretKnowledge because: (no reason given)

originally posted by: Cuervo
a reply to: SecretKnowledge

Wow... this gave me a great idea. I'm going to have my body cremated for sure but... if they could do this with my skull, they could totally use it as an urn for the ashes!


Thats a great idea, but as i stated in the above post, unlikely.
I say you should be allowed do whatever you want with your skull after death. It is after all yours

posted on Sep, 4 2014 @ 11:03 PM
link
That would fit in perfectly at Ripley's Believe It Or Not Times Square. They have Papuan New Guinea ancestor skulls, Tibetan skull drums and other artifacts like that. It pays to see the Jivaru shrunken heads up close.

Nice find, SnF! It is beyond beautiful!

I love and collect skulls, well bones really, and this skull has carvings of skeletons! Double the fun there! Love it, want it, need it. You can just see all the love and time that was out in to all the intricate carvings throughout the skull, just spectacular.

Something like this would look perfect next to my articulated kitty cat.

It just goes to show, you can make an awful lot of beauty out of something dead. Scrimshawed bone pendants, mountings, and of course these wonderfully worked skulls. The precision with which the marks are made, the skill required not to penetrate the bone fully, while getting really deep into the fabric of the bones of the skull.... astounding.

Bloody good find SecretKnowledge! S+F and all that!

posted on Sep, 5 2014 @ 07:56 PM
link
Interesting skulls. I think that bones like these were soaked in urine first to soften them before being carved. They harden up again afterward.

I'm only guessing but I suspect the skulls were meant to be placed inside a stupa with the other remains of a deceased lama. For some reason these skulls were removed from their stupas.

posted on Sep, 6 2014 @ 08:27 AM
link
The script on the jaw of the skull is not Nagari, but Lantsa. That suggests the skull could be Nepali in origin, not Tibetan.

I seriously doubt a Tibetan (i.e., trans-Himalayan) provenance for the skull -- I would say it is a modern (though quite artful) creation of Newari origin in Nepal. The Newaris are fine artisans, when they want to be (and make no mistake, an item like this would fetch many hundreds or even thousands of dollars on the black market in Nepal, where that's a lot of money).

The bone discoloration is an unreliable indicator of age in this case. It is however typical of tourist items (including bone) that originate in Nepal. The artisans hang their creations -- bone carvings, wood carvings, cast metal statues, thangkha paintings or whatever -- in a smoke house like so many hams, and smoke them and rub dust into the creosote, until they look old and well-handled. The three figures carved here -- Citipati (dancing skeletons), Garuda and Vajrapani -- appear to have been chosen arbitrarily. This is obviously a tourist item, albeit a very well-made one.

Having studied and practiced Tibetan Buddhism for forty years and also earned three advanced degrees in the subject, I can say with a high degree of assurance there is no tradition of carving skulls, and the "Khenpo's" story is probably bunk. In particular, no Tibetan Buddhist would ever carve the skull of a misguided human being in order to help them on the path. They would commission prayers from monks or lamas to help them in the bardo (in-between state) after death and in the next life, and distribute the bones and flesh of the deceased to vultures to pay off their karmic debts and earn merit for the deceased. That's what happens when somebody -- sinner or not -- dies in the Tibetan regions.

Occasionally the bones of a deceased person are used to make ritual implements -- such as a kangling (thighbone trumpet), in the practice of Chod or Ego-severance. But then they are not carved, simply cut to size and used for meditational rituals.

Otherwise the personal possessions and (in particular) body parts of a dead person are considered taboo and inauspicious, and are always disposed of, unless the deceased was an exceptionally holy being in which case the remains are usually cremated and items of clothing, etc., may be distributed as relics to the faithful.

No Tibetan lama would keep an item like what you show here for any ritual purpose that I am aware of. But if a human skull has a "mtshan-ldan" or auspiciously marked cranium, the lower portions (i.e. below the temple) are cut off, and the cranium is used as a ritual bowl or mandala-support. It is not carved but kept au naturel, perhaps inlaid with silver.