Abraham Lincoln and JFK have quite a few crazy similarities....

posted on Sep, 3 2014 @ 11:35 PM
link
I came across this little list on Facebook and it honestly blew my mind.. Crazy how close these two Presidents were... Coincidence?

Have a history teacher explain this if they can. 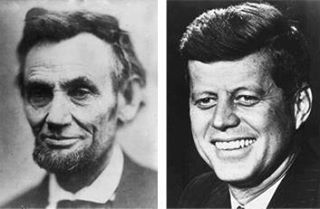 Abraham Lincoln was elected to Congress in 1846.

John F. Kennedy was elected to Congress in 1946.

Abraham Lincoln was elected President in 1860.

Both were particularly concerned with civil rights.

Both wives lost a child while living in the White House.

Both Presidents were shot on a Friday.

Both Presidents were shot in the head.

Now it gets really weird.

Both were assassinated by Southerners.

Both were succeeded by Southerners named Johnson.

Andrew Johnson, who succeeded Lincoln, was born in 1808.

Lyndon Johnson, who succeeded Kennedy, was born in 1908.

Both assassins were known by their three names. (Lee Harvey Oswald and John Wilkes Booth)

Both names are composed of fifteen letters.

Now hang on to your seat.

Lincoln was shot at the theater named "Ford."

Kennedy was shot in a car called "Lincoln" made by "Ford."

Booth and Oswald were assassinated before their trials.

And here's the "kicker":

A week before Lincoln was shot, he was in Monroe, Maryland.

A week before Kennedy was shot, he was with Marilyn Monroe.

Lincoln was shot in a theater and the assassin ran to a warehouse...

Kennedy was shot from a warehouse and the assassin ran to a theater...

I saw this had to share just in case anyone did not know.

Yea, you read the list and your first thought is "this can't be legit", but then you start digging and you quickly find out it is... I really don't know how things work out like this either. The logical part of my brain says this is all a big coincidence, because I just don't see how it could be anything else but that... Just weird weird stuff...

originally posted by: xuenchen
TPTB and the Illuminati love patterns and coincidences.


Ain't that the truth! Gotta love the patterns...

posted on Sep, 4 2014 @ 01:04 AM
link
Well you got one point wrong. Lincoln wasn't terribly concerned about Civil Rights. In fact he really didn't want to free the slaves. Kennedy, on the other hand, was in talks to have MLK as his vice POTUS.

I saw a thread on either here, or another site where they author had a link to Snopes™ that a lot of these are either untrue or there is a very, loose connection.. I just checked Snopes™ and they even have the same pics..

posted on Sep, 4 2014 @ 12:56 PM
link
Saw this in the Reader's Digest book Strange Stories and Amazing Fact. It's an old thing, but I hear it's been debunked somewhere.

posted on Sep, 11 2014 @ 10:15 PM
link
but there is marilyn monroe is missing in lincoln history,
monroe played great important role in JFK life.