Thank you! I have been checking the who.int site several times a day for updates and none to be found. I think you're right - they don't want panic, or any more airlines cancelling flights either. ...Everyone is saying it's out of control - AND that the window for containing the epidemic is closing.

Seems Nigeria has been covering up a whole heckuvalot. From your source:

However, the authorities of the isolation centre in Lagos never disclosed to the public that an ebola positive patient had escaped from the centre when the incident occured. This information is only just coming to light following the death of a doctor in Port Harcourt.

posted on Sep, 3 2014 @ 10:20 PM
link
Still waiting for the latest WHO numbers. But while we are waiting, some epidemiologists are using the following numbers in the meantime. These numbers are not official from WHO yet, and the numbers from WHO may differ when they come out.

edit on 3-9-2014 by ikonoklast because: Fixed broken link

posted on Sep, 3 2014 @ 10:22 PM
link
If it continues infecting at its current rate... dismal outlook for the future.
Lets see if this chart is right, will check in a month and see what the number is. 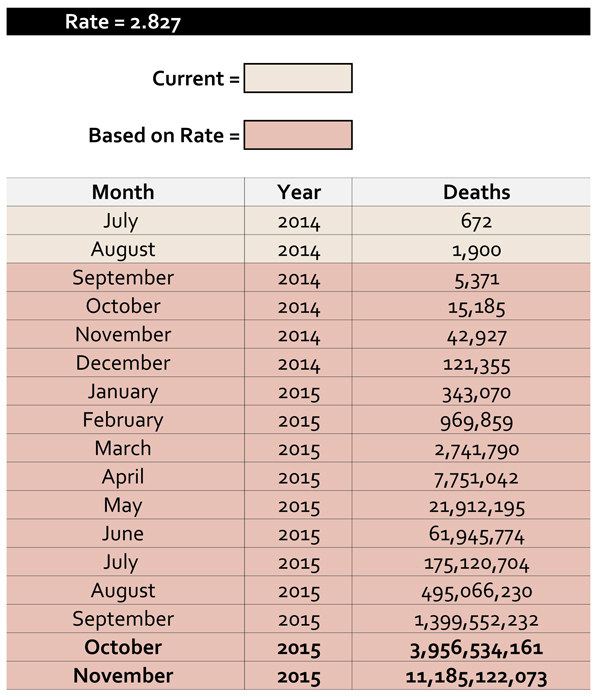 this is all crying wolf. I'm sorry. yes, people are getting sick with it. NO it's not the horrible disaster you all seem to wish that it was. it's just not. sorry to burst your bubble.

This is a horrible disaster. And I don’t know why you think the WHO and Doctors without Borders are “crying wolf.” They are the ones who are trying to sound the alarm. If this keeps spreading the way it is, 1000s will be dying every day very shortly. And even if this epidemic slows and comes under control, the fact is that ebola will be here to stay. No more small outbreaks every couple of years in the middle of the jungle. This virus will be a part of life in many areas around the world forever.

posted on Sep, 3 2014 @ 11:13 PM
link
Stop comparing ebola to a seasonal flu outbreak. Flus infect millions of people in a short period of time killing a percentage whereas ebola hasn't infected millions of people because it's rate of infection is much slower, but over time if not contained it can over-take the common flu and kill millions of people.

It took Aids a long time to spread also and that required blood to blood contact via sex but ebola is far more virulent than Aids and if treatments fail will be far more devastating in my opinion. Let's hope they get this under control fast.

Ebola is really the new Aids in terms of a new breakout disease from Africa. Keep an eye on it's R0.


Correction: I had a typo in my spreadsheet but it's too late to edit my previous post. Total deaths (if country numbers are correct) was 1837 as of 8/30/2014, which would be1011 new deaths in August.

Update: Some of the sources have added further updates which would indicate 3844 total cases and 1977 total deaths as of September 2, 2014 if their numbers are correct. As noted previously, these are not numbers from WHO. There is still no new update from WHO posted and the WHO numbers may differ when they are posted.

originally posted by: loam
a reply to: soficrow

I wonder what Koye's current health condition is? None of the news I can find is clear about this.

It seems likely Koye did really have Ebola. He was a primary contact of Sawyer and he originally tested positive. Plus the doctor who treated him in Port Harcourt contracted and died from Ebola, the doctor's wife is in isolation for Ebola, and the doctor's sister is in quarantine. And a patient that doctor treated (apparently after becoming symptomatic) later died from Ebola.

The question is, if Koye has now tested negative twice for Ebola, does that mean he a survivor with no more signs of Ebola? Or does it mean the current tests for Ebola not accurate enough?

WASHINGTON: More than 1,900 people have now died of Ebola in west Africa, the World Health Organization said Wednesday, warning the world’s worst-ever outbreak of the virus is still gathering pace.

“As of this week, we are reporting 3,500 cases confirmed in Guinea, Sierra Leone and Liberia and more than 1,900 deaths—and the outbreak is rising,” WHO chief Margaret Chan told reporters in Washington.

The latest toll represents a significant increase from the 1,552 deaths and 3,069 cases reported by the Geneva-based organization just days ago.

How about this News:

However, a report presented at a meeting of the board of the trust on Wednesday, September 3 said the risk of someone in Worcestershire being infected by the disease was very low.

But the report written by associate chief nurse for infection control David Shakespeare and consultant microbiologist Dr Jane Stockley – which was originally part of the meeting’s private agenda but was moved to the public session as it was not believed to be sensitive – said it was important to be alert.

“There is a very small risk that a patient who has an appropriate travel or contact history could present to an admitting area at the trust,” it read.

Now this above doesn't sound too good. Hope the person they are talking about is careful.

Ebola will take 6 to 9 Months to control according to this:

originally posted by: loam
a reply to: soficrow


Ah, yes. That pesky incubation period. [eta - OR - he was tested after he was cured?] But thing is, he WAS in quarantine and Nigeria did not tell anyone that he went AWOL. I remain greatly suspicious that Nigeria is hiding many, many more cases than just this one.

To put this into perspective:

That's a 33.5% increase in cases and a 51.4% increase in deaths in Liberia in 7 days. That made me wonder if there was a big difference between what WHO was last reporting and what the Liberian government was reporting at the same time. So I checked and found this:

Those numbers are a bit higher than WHO's previous numbers for Liberia, but that's still a 31.8% increase in cases and a 36.3% increase in deaths in 8 days.

I think we can rely on the fatality rate the numbers indicate - but nothing else. There simply is not enough manpower anywhere in West Africa to identify, catalogue and report suspected cases - never mind manpower and facilities needed to bed and treat patients. There are no accessible hospitals or clinics for most West Africans - no one to test and diagnose, no one to report cases.

I know you need to rely on the WHO stats - but I really think my projections are more realistic/accurate. Based on a reported doubling period of 34.8 days:

originally posted by: soficrow
a reply to: ikonoklast

I think we can rely on the fatality rate the numbers indicate - but nothing else. There simply is not enough manpower anywhere in West Africa to identify, catalogue and report suspected cases - never mind manpower and facilities needed to bed and treat patients. There are no accessible hospitals or clinics for most West Africans - no one to test and diagnose, no one to report cases.

I definitely agree with your assessment above.

I know you need to rely on the WHO stats - but I really think my projections are more realistic/accurate. Based on a reported doubling period of 34.8 days:

I presume the 12,000 estimate is based on WHO's previous statements that their number may only be at most 25% of the actual numbers. If 25% is correct, the actual total cases would be about 14,740. But it's not a far stretch to imagine that the actual number of cases may be 20,000 already. It would mean that reported cases would be 18.4% of actual, and that is quite possible I think, there's just no way to know.

Between August 1st and August 26th, cases doubled on average every 28 days. Based on the numbers released today, it doubled again in 22 days.

As scary as it may be, your projections could actually be low.

IF WHO's guesstimate that reported cases are only 25% of actual numbers is correct and
IF nothing changes to slow the rate of the outbreak spreading and
IF you assume a doubling rate of every 1 month (it's actually doubling faster)
THEN that would be 943,360 cases in 6 months and in 12 months that would be 60,375,040 cases

Perhaps scarier is that even going by WHO's reported numbers, this only means it would take 4 months longer (10 months and 16 months, respectively) to hit those numbers if it continues to double every month.

Hopefully either it will be contained or an effective treatment or vaccine will be available in sufficient quantities and this will not happen.

On a sidenote, I was wondering what it was that limited the Spanish Flu epidemic in the early 20th century. I assumed it might be that it finally killed off everyone who was susceptible to getting it that bad. But I just happened to see a mention on TV that said it's suspected the Spanish Flu mutated to the point where it was no longer harmful to humans. I don't know if that's true or not though.

posted on Sep, 4 2014 @ 03:57 PM
link
So sorry to say this, but anyone writing here "it's not the horrible disaster you all seem to wish it was" is a sick person. So now wanting to stay informed means we want Ebola to turn into a worldwide disaster? Well, it's probably half way there anyway.

Other than that, thank you all for your very interesting discussion!

I'll update others as appropriate when I can, probably late tonight or sometime tomorrow.

I'm afraid to look. However, R3KR's table up here is just as terrifying...