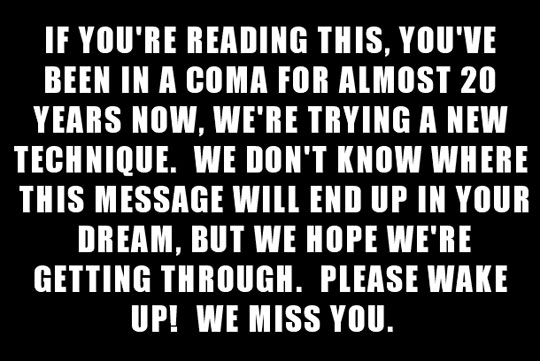 I was using stumbleupon, and randomly came over this picture. There were different layers as to how I percieved it.

Firstly, I was kind of perplexed. It had been a long and mentally draining day at work, so my mind didn't quite catch up with what I was reading. Confused, is probably a good way to put it.

After a couple of seconds, my mind caught up with me, and I entertained the idea of this being "real". It didn't quite help, as it kind of whirled me into a spiralling thought process leading only to some very odd questions.

Then after a few more seconds, it dawned on me! It's just a silly, but clever picture that was made to fool someone like me. Then I laughed amusingly to myself. Although....

Picture source
edit on 3/9/14 by Droogie because: (no reason given)

posted on Sep, 3 2014 @ 10:54 AM
link
with the rate of technological advancements, way the world is today and the like, the first question that would likely pop into my head, "Do/Would I really Want to wake up!?"

Stay out of my dream!


Then after a few more seconds, it dawned on me! It's just a silly, but clever picture that was made to fool someone like me. Then I laughed amusingly to myself. Although....


Is it? Are we so sure reality is what we have all agreed it is? 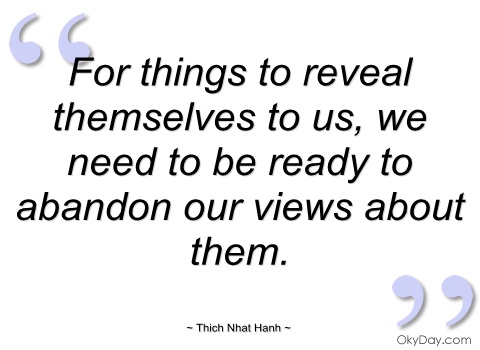 originally posted by: 12m8keall2c
with the rate of technological advancements, way the world is today and the like, the first question that would likely pop into my head, "Do/Would I really Want to wake up!?"

If you really are in a coma, then you have quite an amazing mind to be able to conjure up all the technological achievements that has led up to this point in time, and will continue into the future. I must say I'm happy to be a figment of your imagination! That said, I for one hope you'll sleep for a little while longer

posted on Sep, 3 2014 @ 01:15 PM
link
Well, I think this is for me. I don't know why it is, but ever since my longboard accident, the phrase "wake up" has been more frequent in my life. Eventually, people started saying it to me, as a joke. My friend even said wake up under his breath shortly after my accident in the middle of a conversation about his day at work.

Every time I see or hear it, I just yell out, I'm trying, but I don't know how, not caring who hears me or what they think of me being a crazy person.

I have too many chain lucid dreams where I go about a normal day, wake up into another dream. I can feel pain in my dreams, electronics work normally. The only thing that isn't as real life in my dreams is the perception of time......

There was even another thread on here with the title wake up, which had nothing to do with the thread, which was just a piece of art, in the color scheme of blue, my favorite color.

I'm really scared guys, but don't call the loony police. I live life as if my what ifs are false, but still think about the possibility of truth.

*edit* this is also going to sound the crazy, but if the world is a holographic projection, I am the source. I am the one perceiving the world through my eyes, my mind. It's hard to explain because obviously this fits all of you, but it's like playing a video game. You can only control the one character, but interact with the rest. I am that one character, you are the rest. No matter how you look at it, the characters are still not that "one." Even they know, they aren't "him."

Worst pain I've ever felt resulted from such.

I did. Like a fool, my friends talked me i to it. I had no protective gear, I was going about 20, didn't know how to ride a board at all, let alone foot brake. Got a speed wobble, board slipped behind me, I dolphin dived forward, and the first thing that touched the ground was the tip of my nose. Apparently, it didn't break or bleed or hurt, but I had a fat lip and a couple finger scrapes after. I didn't catch my fall either because my knuckles hit shortly after my nose and my hands rolled over.

I'm a better boarder now, but I refuse to down hills without gear, no matter how much peer pressure I receive.
edit on 0149k3 by Lynk3 because: (no reason given)

We can never truly "wake up" because we've entombed ourselves in a never ending maze of realities. This is how the expressive force that just *is* keeps itself company after realizing it is alone -- it fractured itself into a self-replicating, infinite number of potential realities to explore and keep itself company/occupied/unaware that it is alone and is singular. It is experiencing itself by self-imposed amnesia to infinity.

Just read this post and had my little "what if.."-moment...then checked out the Recent Posts stream again. Clicked on a completely unrelated thread topic and the OP's Avatar is that black & white pic.

Yeah, that is weird! For what it's worth, I can only say that it's a coincidence. Trust me on this

Well, there is a "nexus" of sorts that exists outside of space and time. It has no beginning or end and just "is". Everything that can be, has been or will be all exists all at the same time in that place, and comes forth to the "observer" from that place. It's sort of like a singularity of pure white light.

In that place it can be realized that there is only one true over-arching consciousness -- and it is alone. This realization is why we all seem to perceive the world around us as individuals, and have forgotten where we came from.

If you suddenly realized you had the power to be, see, say, do, create anything -- any time in and in any place...what would you do? The answer: EVERYTHING!

And that is what reality is -- everything that can be will be and shall be experienced in every single permutation to infinity. This keeps the "is-ness-that-is" occupied and in ignorance of its singular alonen-ess. This is why we think we are individuals, this is why we fear death. This is why we are "locked" into our perspective of reality without the knowledge of where we came from or where we go back to. This is why near death experiences often times show people from our past, and bright lights are seen.

We've trapped ourselves in a never ending cycle of experiencing everything from being an atom to a star, from a starving child to a tree or movie star -- in infinite permutations. In some realities only one quark is different. There will never be an end, and due to the limitations in our human brain -- we can't conceive of a system like this that never had a "beginning" (as we understand it).

I MISS YOU TOO! SEE YOU SOON!

I wonder who misses us, maybe ancient humanity consciousness, since we've become so out of touch.

Board riding can be a spiritual journey and an art form, I think it's a great way to wake up. Or at least take a big step outside of the illusion.

Thanks for sharing your story, that sounds like it really hurt. I respect that you still ride after that. I think If someone pressures you into doing something like that than they better be ready to try it themselves.

My worst slam happened bombing a hill in San Diego near point Loma. I was on a regular board and pushed at the top of the hill, got going a little too fast, got an epic case of speed wobbles and eventually went down hard. I found the true meaning of road rash that day.

My spiritual journey is through music. But I do respect longboarding as an art form, it requires finess and balance, like almost anything else in life. Food, gymnastics, martial arts, music, boarding, surfing, sports, meditation....Everything.

*looks at your post, and starts humming Viva la Vida*

I would not say trapped. In my opinion, it was choice.

Back in the day reading stuff like this used to give me one of those "aware" moments. You know, where you are suddenly aware that you are a living breathing person encased in flesh and you hold your hands in front of your face and wiggle your fingers thinking, "hmmm. This really is quite extraordinary."

Now for the sake of my sanity I just laugh and try not to blow things out of proportion. I have to shut my mind off sometimes and stop stressing over what I am, who I am, where I really come, if my reality is just a big dream or whether or not I'm a higher conscious awareness just experiencing this life as a simpleton.

These days I feel I just have to live my life and I try to remind myself that whether or not there is more to me or this reality, right now, this is what I know. It is fun to ponder all the possibilities but somewhere in-between looking for all the answers I stopped enjoying just being a person. Now I'm trying to establish a middle ground somewhere, which is surprisingly hard to do once you let your mind loose on the bigger concepts.
edit on 392014 by MoonMystic because: typo