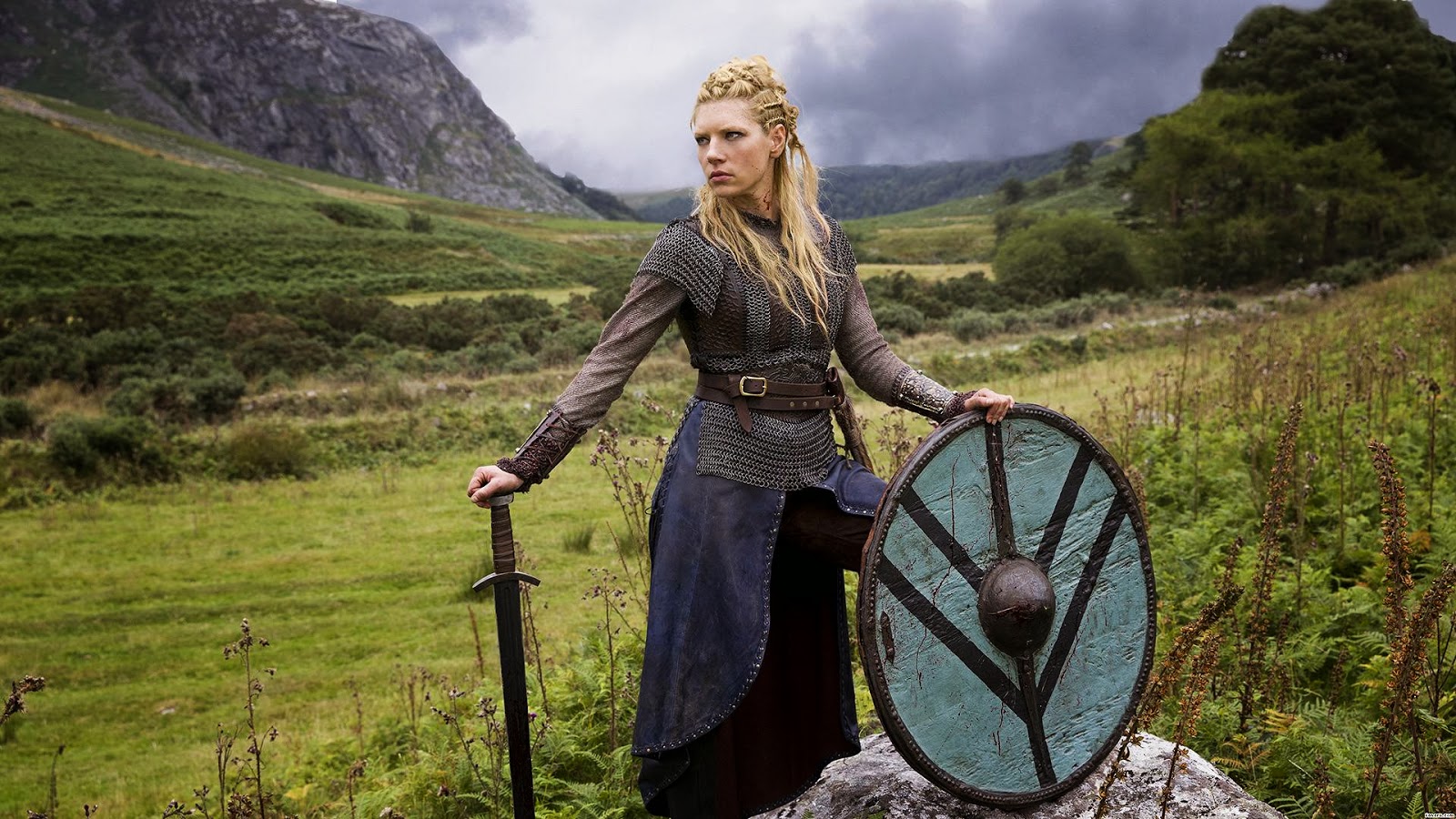 yep, fans of "the vikings" will love this one. researchers at the university of Australia reviewed the bodies from 14 probable warrior burial sites, found that half the bodies were female.

So, the study looked at 14 Viking burials from the era, definable by the Norse grave goods found with them and isotopes found in their bones that reveal their birthplace. The bones were sorted for telltale osteological signs of which gender they belonged to, rather than assuming that burial with a sword or knife denoted a male burial.

Overall, McLeod reports that six of the 14 burials were of women, seven were men, and one was indeterminable. Warlike grave goods may have misled earlier researchers about the gender of Viking invaders, the study suggests. At a mass burial site called Repton Woods, "(d)espite the remains of three swords being recovered from the site, all three burials that could be sexed osteologically were thought to be female, including one with a sword and shield," says the study.

the article speculates about how the presence of women might have impacted the "rape and pillage" paradigm. personally, i think women conditioned to participate in the warrior culture would find nothing wrong with sacking villages. think of the female u.s. soldier posing next to the body in abu gharib giving the old thumbs-up with a toothy grin. 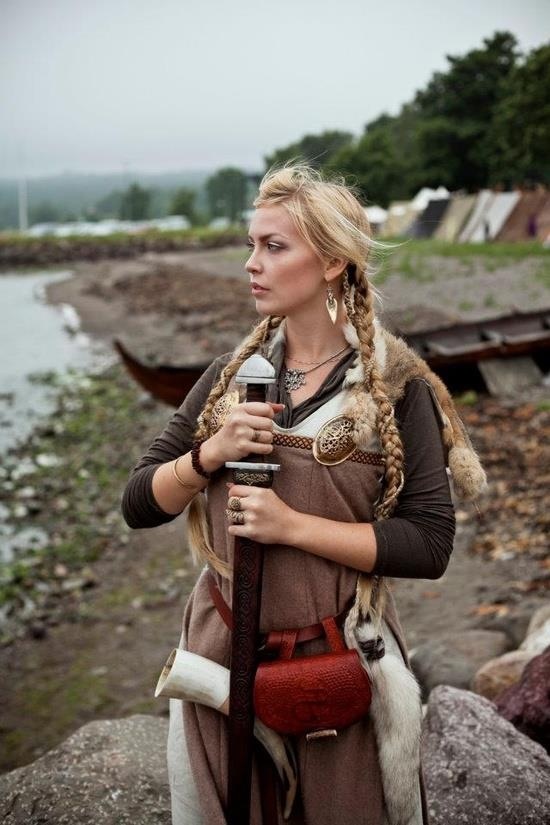 eta: if for some reason that link isn't working, try this one instead. 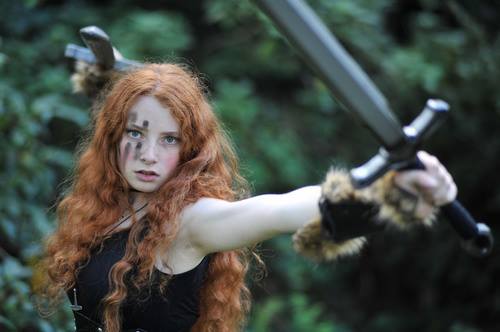 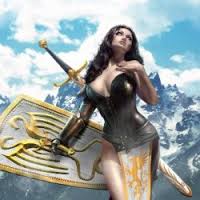 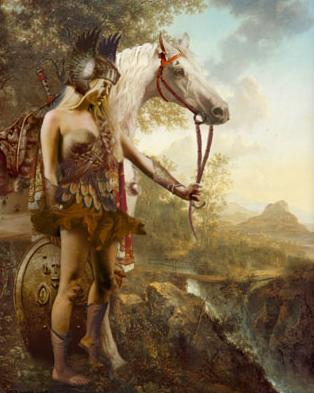 This one just made me laugh: 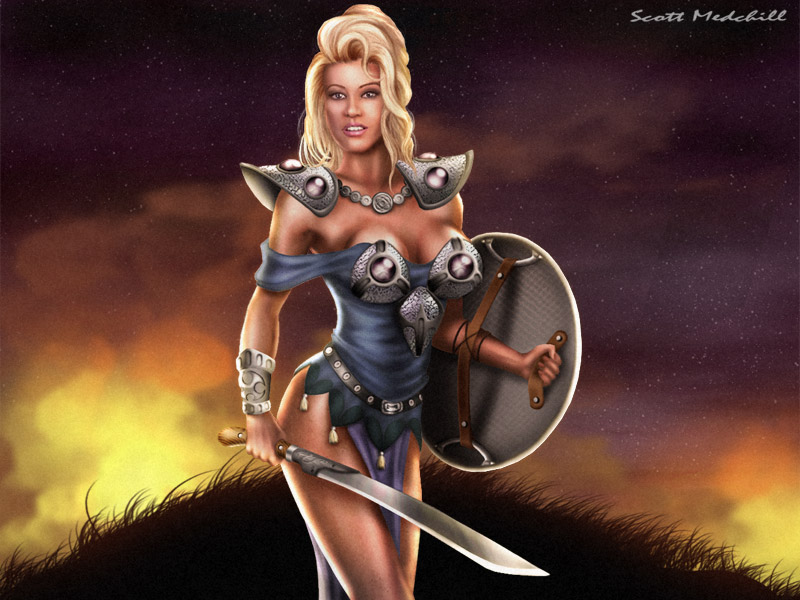 I left out a bunch of dwarf maidens, does that make me prejudiced? anyway, sorry, carry on!

edit on 3-9-2014 by skalla because: pics with chicks
edit on 9/3/2014 by bigfatfurrytexan because: SNIP, remove inappropriate image

haha, i know! i can't get enough of slim blondes with big swords.

posted on Sep, 3 2014 @ 01:52 AM
link
I don't want to piss on anyone's fireworks but it was quite common for female sacrifices to be made to guide dead warriors to Valhalla.

posted on Sep, 3 2014 @ 01:53 AM
link
It makes sense. My wife is of Norse ancestry and I for one know that she could kick some ass on a battlefield, she kicks mine all of the time.

Women have played a huge part in the shaping of the world up until the times of monotheism. Gotta love single god "religion" for putting a woman in her supposed "place". ( which I think is a total crock... men and women are equal and always have been.)

for the honchos, sure, but even then sacrificial household ladies aren't going to be equipped like warriors.

these were mass burials of the rank and file.

star for "piss on anyone's fireworks" (lol) as well as the thoughtful point.

posted on Sep, 3 2014 @ 02:04 AM
link
Enjoying how these new finds are breaking the common notions about Vikings. Your source isn't working? I am wondering if there's updated information concluded from when I shared an article on this(aligns with the information):In 2011 - Invasion of the Viking women: Wives joined warriors when they came to Britain .

I just found how I want to die.

posted on Sep, 3 2014 @ 02:55 AM
link
Not surprised at all. I'm sure there are many cultures from those times where women partook in combat. I remember reading somewhere that there was a village full of remains found in the Amazon of bones and items, showing that women were the rulers in that society. The village queen held gladiator style fights to the death for either ritual purposes or entertainment.

What i wan tot know is how able and effective would women warriors be? Today's gun combat had pieces of metal flying all over the place while everyone sits and runs behind cover. Little kids can compete in that (they really do, though). But wielding swords and axes, which i am sure was heavy, against other fully grown men defending their land? How did women fair with a large disadvantage in brute strength? They will most likely be stunned or on the ground when clashing swords with an angry Briton.

They probably concentrated on agility, parrying, and glances in order to keep up out there.

i dunno, this woman does ok with a sword.

I didn't see anything there to demonstrate that particular person effectively fighting a full grown man.

I am by no means saying it has not been done and women have not kicked ass, but i think women in CQC will HAVE to be more skilled and honed in coordination, agility, footwork, and timing in order to counteract the pounds of force coming from a man's sword/ax strike.

she just won a national tournament in which she was the sole female contestant.

she looks like a big, strapping woman. maybe that's why the bodies weren't identified as female until much later, maybe there was far less of a size difference between viking men and women. /shrug

posted on Sep, 3 2014 @ 04:06 AM
link
Nice find,but I am not really surprised pre Greek/Roman /Abrahamic era females had real power in the far north I don't think they reached a full matriarchy as in some southern societies but they had a hand in running their societies,one would think given the extreme warrior ethos of the northerners which would place a high premium on male physical prowess they would be relegated into being baby making factories,not unlike the women of Sparta or Greeks or Romans in general.
The Amazons in this case the Eurasians were in fact protesters opposed to extreme Patriarchy which the Greeks thought unseemly even big bad Heracles had to man-up against them.

posted on Sep, 3 2014 @ 05:07 AM
link
Being they couldn't discern the gender difference by sight alone, but through testing, my guess would be that the Viking women were of Similiar build and brute strength as the men. The guys ogling the posted pics on here can still keep their fantasies, but in reality, the real historical women warriors would probably had you screaming in fright!

A good spot but further verification is certainly needed. What isn't in doubt is the important role women could play in Viking society - as they themselves tell us in various sagas that have survived to this day.

However, Repton was often marauded through by both Saxon and Viking in this time frame - for example the "Great Army" around 873 AD. This region was full of campaigns of intimidation and brutality by both sides - slash, burn and pillage. Therefore it cannot be ruled out that these women were not simply slaughtered and then buried at a later date when "friendly forces" returned to the area (again, common in this time frame).

posted on Sep, 3 2014 @ 07:10 AM
link
Your link doesnt work. Despite this, there is a crazy misinformation about Norse society brought on by people's modern day conceptions.

The Norse were more egalitarian than any other culture in existence, but they were far from equal. Example women could own land, but only if their husbands who owned it died.

In the case of the Jomsvikingar, women were not even ALLOWED in Jomsborg fortress, let alone to fight with them. According to Takitus the women of Germanic tribes followed them into battle encouraging them with slogans and carrying shields and food for them - that's likely where the term shieldmaiden came from. When the Germanic and Gallic tribes migrated to new areas you could tell they were looking to settle somewhere if they brought oxcarts and women/children with them. Overall, Germanic cultures were heavily patriarchal, like all societies in the world.

That said there is some badass women in the Greenland Saga, including Freydis who scared off an army of attacking Skraelingar while she was pregnant. Hardcore!

Skalla, good finds and historical research. Now we know exactly how these Viking women dressed, and what types of uniforms they preferred (even in winter). When they stopped in a new town and shopped in the town square they may have changed the fashion sense of the area, and eventually all of Europe. So I have to assume that within a couple of hundred years of their appearance all women in Europe dressed like this. I am grateful to you for your research, and fine artistic/photographic portrayal of Viking fashion.

p.s. That last Viking lass was quite adapt at not cutting herself. Talent like that takes practice.

originally posted by: Scorchio
I don't want to piss on anyone's fireworks but it was quite common for female sacrifices to be made to guide dead warriors to Valhalla.