With the NATO summit about to happen in Newport, living in South Wales is a little mad at the moment.

I've never seen so many police. Travelling the M4 - past Newport & back - on Saturday, the motorway was filled with everything from arms-carrying army convoys to Scotland Yard police vans. Police presence in the immediate surrounding areas was obvious & significant, with masses of bobbies stationed on key off-ramp roundabouts & even on the nearby hillsides.

A portion of the M4 is cordoned off with heavy duty steel fencing... something which also cuts through Cardiff city centre. It's absolutely mind-blowing when you look at the Castle.

My family & mates from the areas surrounding Newport have been speaking of crackling mobile phone lines and apparently ground-to-air missile launchers were transported in to the Celtic Manor (where the summit's being held) just a few days ago.

I know it's all very much to be expected... but I suppose it feels all that more gobsmacking because it's in my back yard; a quiet little place of dodgy accents, green & trees.

It also somehow feels like a random glimpse into an all-too-real & impending future... if you know what I mean.

I'm just hoping that the recent threat level step up to severe won't be realised at the summit.

Warships have also started to arrive. Again, I appreciate that this is all to be expected, given the gravitas of the summit. It's just a little bit bizarre having all this going on in your own backyard, and in a tiny little country of just over 3 million people: Warships
edit on 2/9/14 by lizziejayne because: (no reason given)

Cardiff centre is kind of small, the castle right there where you wouldn't expect it to be, I imagine it is sort of swamped, like a film set.

I am an hour from Cardiff and London along the M4 and near Fairford, there have been a lot of C5's and something resembling a B52 and large aircraft flying around, as well as army helicopters, including those flying super low. Obama is flying there tomorrow, staying Wednesday and Thursday night.
edit on 2-9-2014 by theabsolutetruth because: (no reason given)

Cardiff centre is kind of small, the castle right there where you wouldn't expect it to be, I imagine it is sort of swamped, like a film set.

I am an hour from Cardiff and London along the M4 and near Fairford, there have been a lot of C5's and large aircraft flying around, as well as army helicopters, including those flying super low. Obama is flying there tomorrow, staying Wednesday and Thursday night.

You're right - it's remarkably like a film set! It's actually consolidated my belief that Cardiff Castle's the place to go in the event of a zombie apocalypse, lol.

I'm actually a little disappointed I didn't have an opportunity to visit Newport, because that's actually the closest city to the summit. That said, I've seen the impact on nearby towns, so I imagine it's quite significant. I suppose they've extended security to Cardiff because it's the capital.

Being based where you are, I bet those 'copters were swooping in very low! BBC: NATO Military Flights Cheers for sharing

posted on Sep, 2 2014 @ 09:34 PM
link
All that crap wont stop a determined team if they have the training....Id bet the SAS or other elite units could likely do great damage to an affair of the same magnitude if ordered to do so....after all, it was a US Army demolition team that set the charges to take down the Alfred P. Murrah building.....(their chopper was blown out of the sky over Killeen an hour after the bomb went off....)
Jihadists don't appear to have the skill set of professionals though...

posted on Sep, 3 2014 @ 02:15 AM
link
I had to laugh when I first saw the fencing around the Celtic Manor whilst driving down the M4 last week. It just seems to be done for visual effect! It looks flimsy and it’s not very high, anyone who’s reasonably fit could quite easily launch themselves over it no problem.

It was only last night I heard about the warships down Cardiff Bay. Now what on earth is that all about? What exactly are they there for?

I was eyeing up a few of those fences to zombie-proof my house! But yes, they do look rather flimsy... I think the fact they're everywhere is why it's quite so overwhelming.

As far as the warship thing goes, it's more than a little unnerving. Apparently, there's already French & Latvian navy ships in dock along with a British Navy destroyer. A Dutch minesweeper, Lithuanian mineweeper & Norwegian missile patrol boat are on their way.

Let's hope it's all posturing and not informed preparation. Eeek!

True... despite all that security, any purposeful & informed faction would still be able to cause considerable disruption and damage.

Am I right in assuming from your post that you're anticipating a false-flag?

I read that 7 war ships are to be there, seems like a waste of resources IMO, as they aren't reportedly involved in any 'display' or any real purpose, apart from 'defense' which seems a bit much seeing as the threat is unlikely to be from the sea or large scale missile unless they are thinking 'missing Libyan planes' style threat, but rather from individuals.

There is also an 'air display' which also seems rather wasteful, do they need pomp and ceremony for a conference?
edit on 3-9-2014 by theabsolutetruth because: (no reason given)

posted on Sep, 3 2014 @ 01:02 PM
link
My son, an expert at recognising planes just advised me that the large plane that just flew over our house on an East to West approach then turning sharp North, possibly towards Fairford as it's landing gear was down, was Airforce 1, ie carrying Obama who is reportedly travelling from Estonia and perhaps taking a helicopter from Fairford to Newport.

I took a few photo's though it was a bit far by the time I grabbed and unlocked my ipod. I downloaded them and one of them has treble six KB! 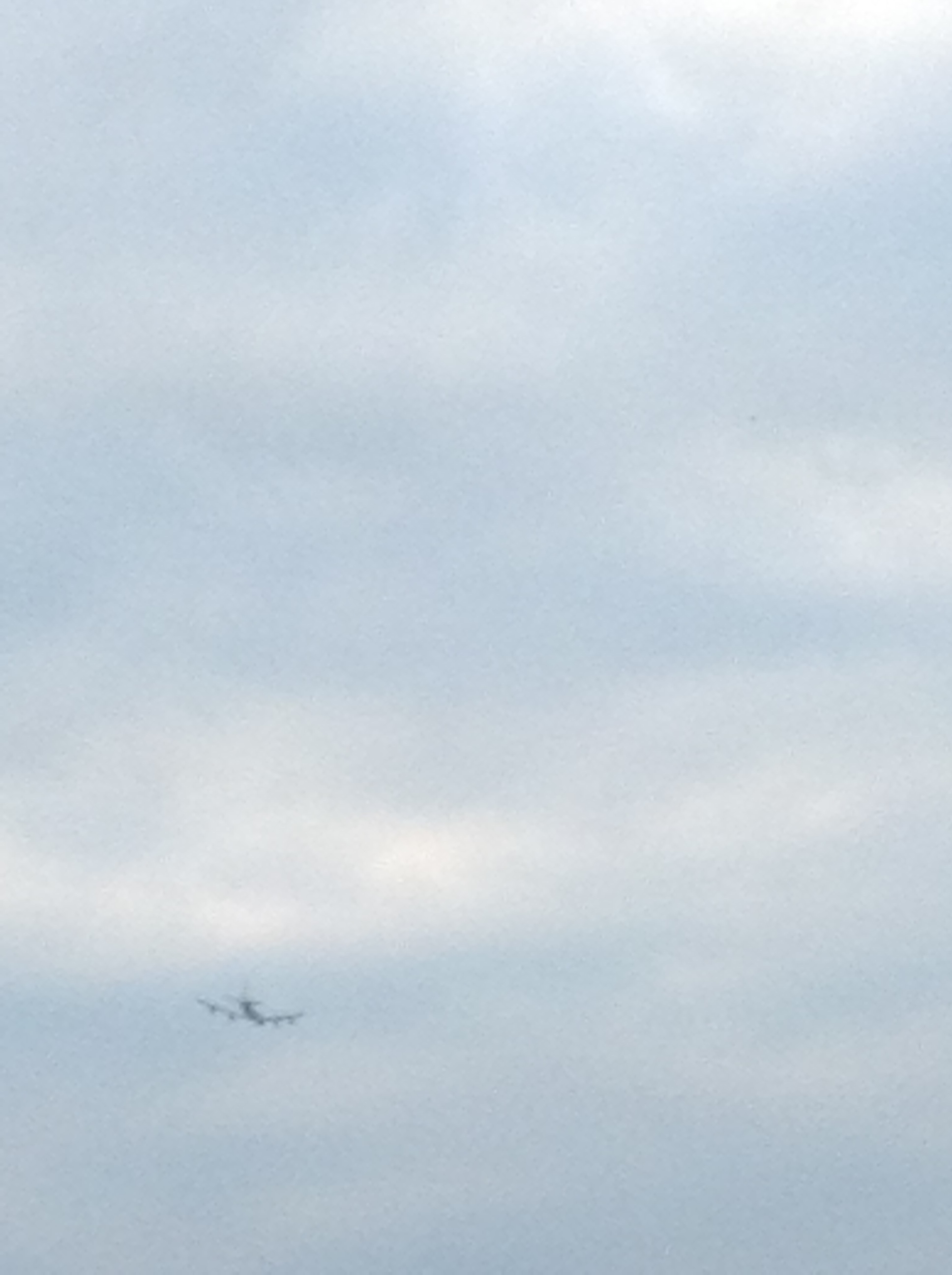 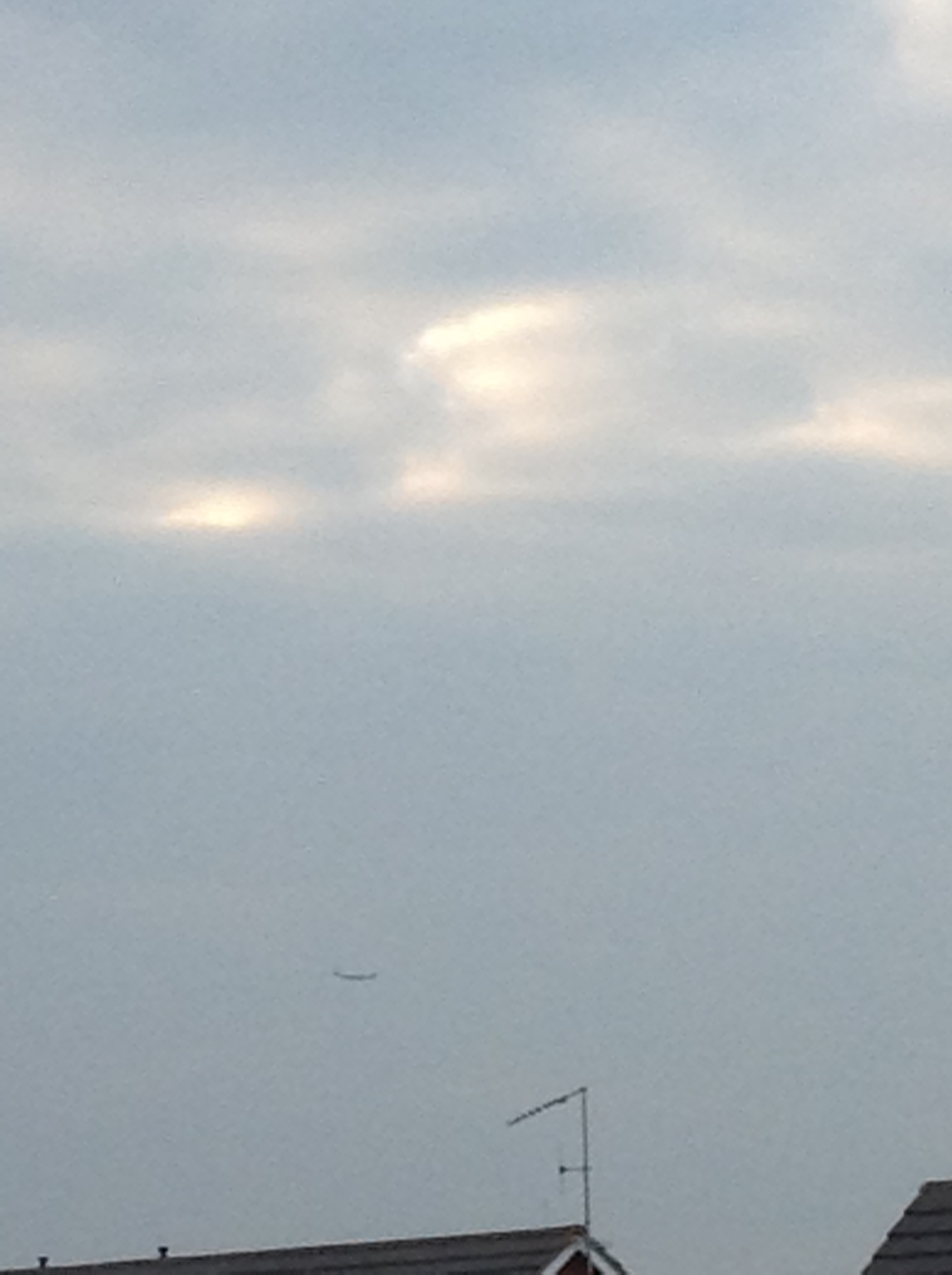 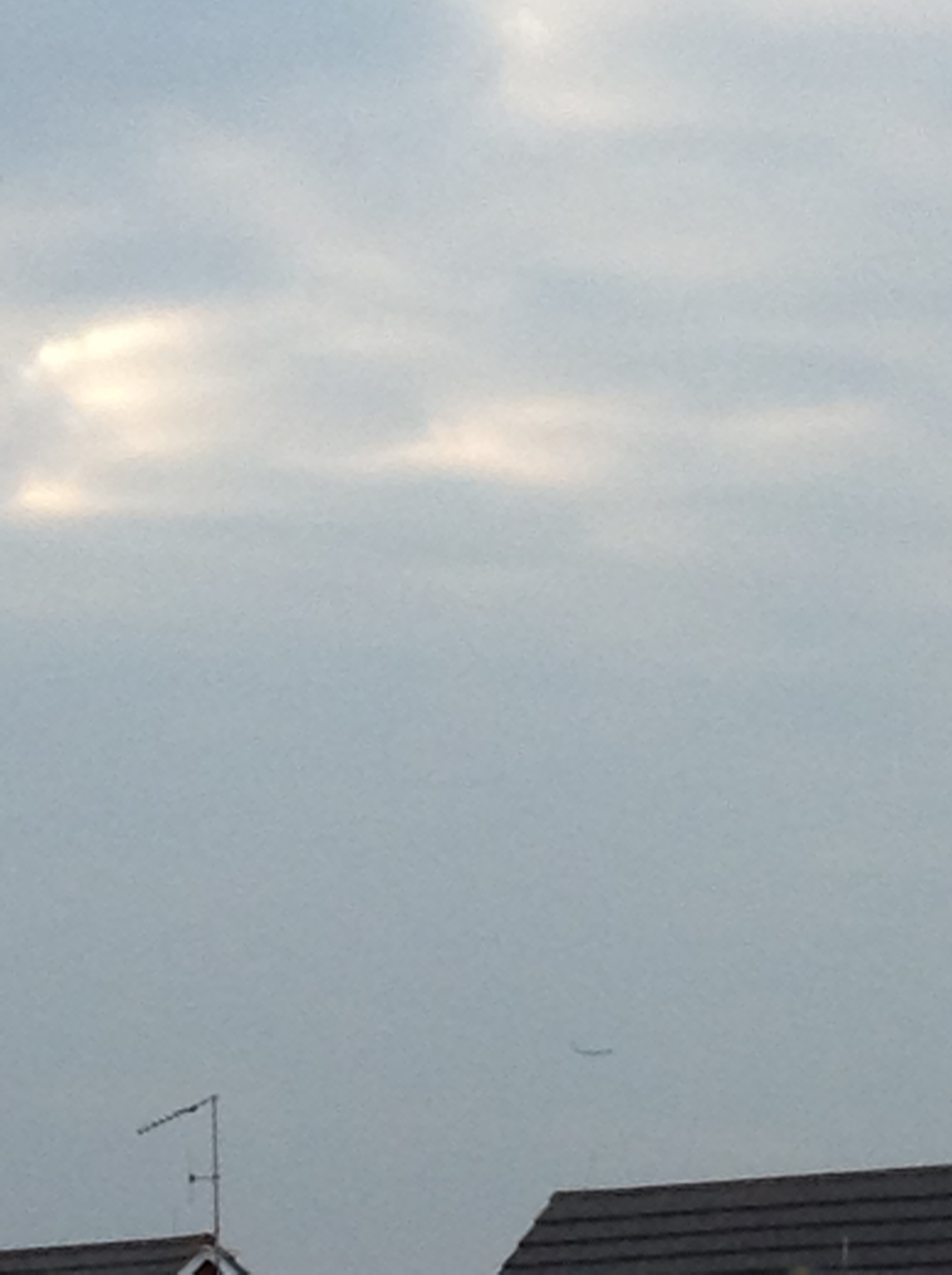 The air display in particular seems a bit ridiculous & egotistical, given the current climate - it reeks of a pi**ing contest

originally posted by: paradisepurple
7 warships in Cardiff Bay! Now that's something you don't see every day... If it wasn't such a nightmare getting in and out of the city I'd go down to have a look.

Just thinking, with an extra 10,000 police officers being brought in from other forces across the UK, could something happen elsewhere while all eyes are on Wales?

I think you're spot on to be honest... it's a perfect opportunity to cause ructions elsewhere. Let's hope we're wrong!

That's a mad thought isn't it - Air Force One flying over your house! I was just ribbing my mate (who's flying from Newcastle to Bristol tonight) to keep an eye out for Obama in Arrivals, lol.

Fantastic pics - thanks for taking & sharing!

My mate has just this second posted one on his FB timeline - taken over the Raglan/Usk area: 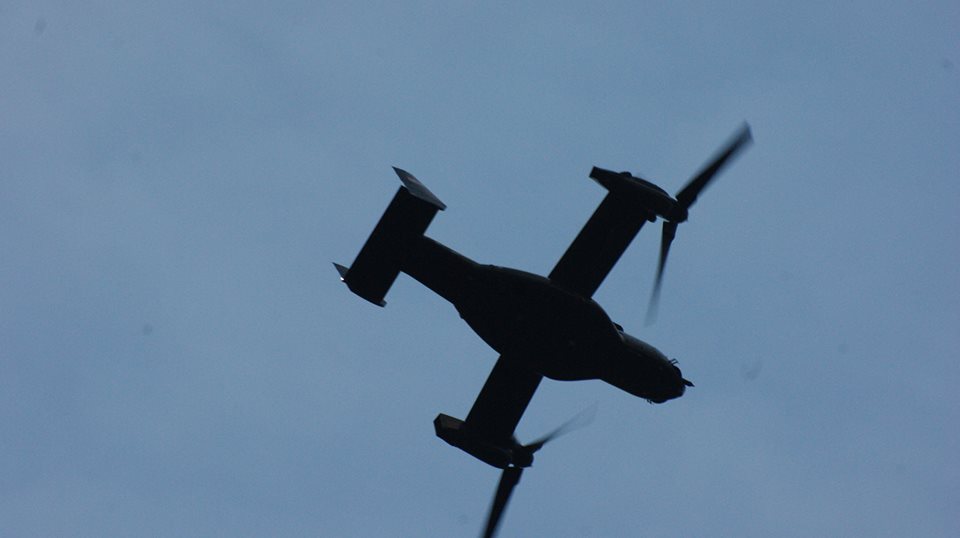 Congrats to your son, well spotted!

Didn’t have time last night but just ran a playback on Flightradar and no aircraft were picked up with four engines flying that low over your area when your son saw that yesterday. So yeah I believe it was definitely AF One. Obama arrived at the Celtic Manor at 19:30 via helicopter from Fairford so the timing is perfect.

Lots of plane-spotters were at Cardiff Airport yesterday hoping to see AF One, they’re going to be so disappointed!

Thanks for that, I wondered, my son was very excited and he didn't even know about the NATO conference, but AF 1 is something he has always wanted to see. It was flying pretty low, literally just above and in front of our house then turned towards Fairford, which is literally a few miles directly in front of our house, with it's landing gear down.

I guess there isn't the facilities for AF1 at Cardiff and for security, also it's easier to fly direct in a helicopter to the place in Newport, safer than driving.

I will look out for it flying back on Friday and try to get better pictures if it passes this way, though it might be going straight West rather than South then West.

There is a link to the timetable of events, including links to live streams. Hopefully people will find this useful.

The air flyby is a big flexing of muscles, necessary? Not really! But I'm sure TPTB couldn't resist, unless its a NATO summit "tradition"?

Cheers for sharing the timetable

But one pupil, Ben Thornton, said he wasn't sure if the President would return to the country, despite the schoolboy's best efforts to encourage him to.

In a slightly confused tone of voice, he added: 'I think he wants to sell ice cream or something.'

I'm also loving the opportunity for a show of Welsh humour (link):

A South Wales taxi driver has been left red-faced after taking Barack Obama to CASTLE BINGO instead of CARDIFF CASTLE.

“I’d had a long day and it was the last fare of the day for me. Round here, the ‘Castle’, as in Castle Bingo, is the only place to be on a Wednesday night in Newport. So I heads to the Celtic Manor and this dude gets in dressed up like he’s going to some posh place. I tells him that he might be a bit overdressed as they don’t do Cashpots on Wednesday nights but he laughed it off. He was nice enough and left me a half decent tip.”

posted on Sep, 5 2014 @ 02:31 PM
link
Just watched 3 low flying Osprey V-22's in a straight line right in front of our house West to East and lots of military helicopters flying South to North to Fairford, could have been AF1 escorts. Certainly a lot flying in to Fairford.