A relatively small company, the developers of the "CryptoPhone 500" took it on a test run up the eastern seaboard of the US. Testing the 'hardness' of their device in the real world... but what did they discover?

According to Goldsmith, his team -- using the custom-developed CryptoPhone, which provides a hardened version of Android with a wealth of unique security features and patches a number of flaws present in the stock Android OS -- discovered dozens of fake cell phone 'towers' not belonging to any carriers which intercepted the device's signal, allowing the tower's owner to intercept any calls or communications and even 'remotely push spyware to the device.'

Now, I know that many of us don't believe that privacy is a right, or that freedom has nothing to do with being able to live without the scrutiny of an unknown agency, but frankly... this is just one more example of the way our government cowers in fear behind secret projects and policies - while they extract anything (as well as everything) they can about who you are, who you speak to, where you go, and what you do.

This may not be shocking, except for the fact that baseband interceptors are very costly to produce and difficult to create, meaning that only the truly committed or those with many resources have the ability to make them. The team discovered one such interceptor at a casino in Las Vegas, but many were found on top of military bases and government facilities.

Thus kind of chaffs me ... there's no excuse for it that makes any sense to someone who isn't living in a dream world of made up threats, and make believe enemies. It's time to reintroduce the restriction of domestic surveillance...

posted on Sep, 2 2014 @ 06:37 PM
link
Wow, so this is the level they are playing on....Technology can be used for greatness or for evil. Given humanities track record, I rather be living without any technology (spare me the: "you are using the internet so you are a hypocrite, BS", because the risk of abuse is just to great as seen in the OP and many, many more examples can be given.

The more time moves forward, the more we become dependent on technology, the more they can control us. Being dependent is okay, it depends on what and who.

...And the representatives we vote into office who take an oath to uphold our constitutional rights to privacy, will totally ignore this! They would rather engage in political nitpicking instead of protecting us from federal agencies engaged in covert civilian spying operations. You have to ask yourself, whose do they really represent?

From the Neowin source:

This may not be shocking, except for the fact that baseband interceptors are very costly to produce and difficult to create, meaning that only the truly committed or those with many resources have the ability to make them.

They're really not as expensive as the author leads on (or particularly new). Here's an article about the demonstration of an IMSI-catcher at DefCon in 2010 that cost about $1500 to put together:

There's some interesting information at the Android IMSI-Catcher Detector project site including a list of links to even more information. 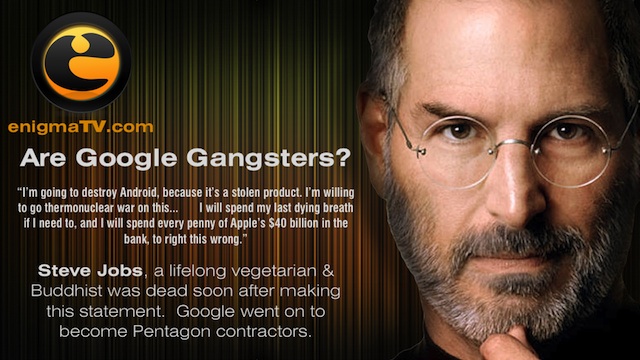 I wonder what Steve jobs was thinking now

I only use my computer for anything important and use HTTPS Everywhere.
www.eff.org...

How many people out there use there iphones or Android to do banking or business without encryption.

ArchPlayer
+10 more
posted on Sep, 2 2014 @ 09:56 PM
link
Some people will argue with you until they are BLUE in the fact on ATS that there is no way this technology can exist. And because they work for said mobile company, this can't possible happen. First the Kill Switch Bill and NOW this.

This is only what they are letting us know they can do. Imagine what they actually are on????

posted on Sep, 2 2014 @ 10:01 PM
link
What better way to squash any kind of opposition to our fascist dictators, before it even gets started, than this?

If you have something important to tell someone, and you don't want anyone but the intended recipient to hear it -- discuss it in person, in an interior room without windows and very loud white noise.

The irony of Apple's 1984 ad introducing the Mac.

All of these devices are track and trace. Furthermore, ALL of the companies are either directly involved or complicit.

posted on Sep, 3 2014 @ 01:20 AM
link
When I was a kid maybe around four or five, I somehow got the idea that the center of flowers were speakers or communication devices. Probably from something on a children's show on the tube. My Dad would laugh and get a huge kick of watching me examine outdoor things in our yard and laugh about my "imagination" but I always gave a lightly uncomfortable giggle back and the smile on my face didn't last very long.

posted on Sep, 3 2014 @ 05:50 AM
link
I could be reading this post wrong. What we are talking about is that some people who are making a product that creates privacy just came out and said that there is less privacy then we all thought. Therefore, creating a bigger need and giving their start up company more press then they could pay for.

Not saying they are lying, just saying clarification/verification would be nice before we go all ranty

posted on Sep, 3 2014 @ 05:51 AM
link
So they probably were installed by a government. The problem is, which government?

Dependent on who exactly , we aren't utterly dependent on cell phones / mobiles , more like the cell companyies manufacturers are dependent on us to keep their steady cash flow coming , buy the next model a year later because it has 1 new feature that you must absolutely have to be cool !

no one needs cell phones, we can communicate without smart phones hell we can even communicate without the internet just takes a little more effort, we do not depend on mobile phone technology or internet to survive
its just a luxury that has allowed us to be manipulated , drop the materialism and they would find it much more difficult to spy on us !

posted on Sep, 3 2014 @ 06:22 AM
link
Very interesting, less than 2 miles away from my home there is a tower behind a house and is camoflauge as a big pine tree, I will take a picture later today.

posted on Sep, 3 2014 @ 06:23 AM
link
So much disinformation as usual and the usual 'Government are doing it' crowd are out in force I see. Not saying that some of them may not be in place by the Government, but it's unlikely as they only deploy these types of systems for very specific reasons. If they want access to your phone calls, emails, etc then they go direct to the service providers, did no one else read the recent leaks and apply this with common sense?

1) The headline is misleading (not your fault OP) - it implies they are only spying on Android devices - not so, it was just that an Android device which you can install IMSI Catcher Detector software on was used to find them.

A more accurate headline would be "Dozens of fake cell phone towers discovered eavesdropping on phones" - but the person who wrote it probably didn't think about the possibility of wrong interpretation of the original sentence or is just an Apple fanboi.

2) These 'towers' which are more likely to be small femtocell sized homebrew devices can be easily constructed by someone who can read, understands Linux, has some mediocre programming skills and any amount of money ranging from about $50 to many thousands.

The simplest form without going into too much detail utilises a few certain models of a particular brand of phone loaded with custom baseband firmware which communicates directly to a PC running software under Linux.
You can also use other radio interfaces like USRP or HackSDR, depends on what you want to do exactly but the $10 redundant phones (which are harder to get hold of now for obvious reasons) are the cheapest route in. It certainly does not cost a lot of money and is not in the realms of Government only technology.
This is an increasing problem with relatively petty criminals acquiring personal data for the various usual purposes.
This uses 2G and GPRS for data, I am not aware of any easy solution for 3G/4G - hence why in the article it notes that phones are forced down to a 2G network.

So sorry to burst the 'governement did it' crowds bubble, but a little reading around will show you what I'm saying is 100% correct and easily achievable. The only 'conspiracy' here is that the cellular companies probably don't make a big of a deal about it as they should informing people and replacing the old redundant network a lot quicker.

Did you know for instance, using $20 of hardware, a Linux PC and a 2TB hardrive containing **something I'm not going to advertise** ANYONE can easily listen to telephone calls and receive SMS messages from their local 2G cellular towers? It's not actually hard anymore.

Don't ask me for specific information, it's against T&C and I'm not interested in helping anyone hack anything. If you ignore this you will be ignored I'm afraid, I'm only reluctantly writing this at all when I normally avoid these subjects because I'm astounded by the lack of knowledge people are displaying when it is so readily available, and it's a very important subject to be aware of.

posted on Sep, 3 2014 @ 06:26 AM
link
I cannot understand people who cannot understand why I don't have a cellphone, iPod, blueberry, galaxy, laptop, WiFi, and I'm not on bookface, twatter, flicku, or any other datamining site.

originally posted by: MystikMushroom
It's called "Stingray" and the ACLU is aware of it:

If you have something important to tell someone, and you don't want anyone but the intended recipient to hear it -- discuss it in person, in an interior room without windows and very loud white noise.