The army originally ordered 126 M3 launchers and about 3,000 rounds of ammunition (although SOCOM was included on that order), and has since bought more.

The service has used the high-explosive (HE) round and a high-explosive dual-purpose (HEDP) round. HE rounds include an air-burst capability that can be set to explode over targets that are hiding behind structures or are in defilade. HEDP rounds are intended for use against light armour, walls, or bunkers.

Meanwhile, Saab said "a new, lighter weight, version of the Carl Gustaf is currently under development" that is to include "additional functionality". 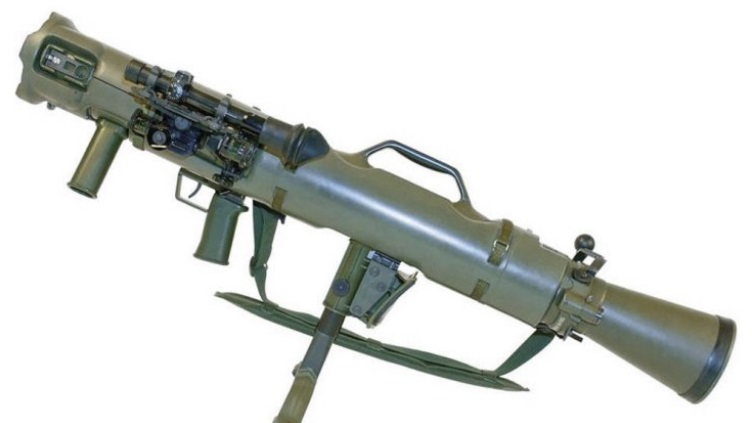 Why--- you may ask--- does SOCOM want this bad boy?
well to answer let take a look at what this puppy shoots.


Note that the following are Canadian designations (other countries use similar terminology, replacing the "FFV")

FFV441 is an HE round, useful in a "lobbed" trajectory to 1,000m, which can be fused to either detonate on impact or as an airburst.
FFV441B is an HE round with an effective range against personnel in the open of 1,100 m. The round arms after 20 to 70 m of flight, weighs 3.1 kg, and is fired at a muzzle velocity of 255 m/s.[5]
FFV469 is a smoke round fired like the FFV441, with a range of about 1,300 m. The 3.1 kg round is also fired at 255 m/s.[5]
FFV502 is an HEDP round with the ability to be set to detonate either on impact or one-tenth of a second afterwards. Effective range is 1,000 m against dispersed soft targets such as infantry in the open, 500 m against stationary targets and 300 m against moving targets. Minimum range is 15 to 40 m to arm the warhead. Penetration exceeds 150 mm of rolled homogeneous armour (RHA). Ammunition weight is 3.3 kg and muzzle velocity is 230 m/s.[5]
FFV545 is an illuminating star shell, fired up to 2,300 m maximum range, but with an effective envelope of 300 to 2,100 m. Suspended by parachute, the star shell burns for 30 seconds while producing 650,000 candela, providing a 400 to 500 m diameter area of illumination.
FFV551 is the primary HEAT round and is a rocket-assisted projectile (RAP). Effective range is up to 700 m (400 m against moving targets) and penetration up to 400 mm of RHA. Ammunition weight is 3.2 kg and muzzle velocity is 255 m/s.[5]
FFV552 is a practice round with the same ballistics as the 551.
FFV651 is a newer HEAT round using mid-flight rocket assistance for ranges up to 1,000m. In theory, it has less penetration than the FFV551, but it includes a stand-off probe for the fuse to improve performance against reactive armour.
FFV751 is a tandem-warhead HEAT round with an effective range of 500 m and ability to penetrate more than 500 mm of armour. Weight is 4 kg.[5]
HEAT 655 CS (Confined Spaces) "high-explosive anti-tank (HEAT) round that can be fired by the 84 mm Carl Gustaf recoilless weapon from within small enclosures" [7]

So just in case SOCOM would find themselves say in the eastern Ukraine and facing off against all that Russian Armor a weapon like this M3 would come pretty handy...esp when you can mix up the ammo to switch between airburst on soft targets to tank busters... pretty darn handy for a small fighting force like SOCOM... kind of takes them up a notch as to what kinds of threats they can deal with all on their own.

you know...
this is exactly the kind of weapon the Ukraine army needs right now...

So I wonder if there is a connection between this order for... and the need to do something over there?

I reckon these are destined for a different home... 126 Carl Gustavs would do little more then annoy Russia... Isis on the other hand.. These Gustavs would do a number on the coalition vehicles they got.

Plus a submarine and a helicopter,
Not to mention a great bunker buster.
Non military people tend to think head to head with attacks on Main battle tanks using the likes of the charlie G or RPG27
But not true using the HEAT/HESH rounds on armored support elements is the real Achilles heal of an armoured assault especially in a FIBUA area.

Plus a submarine and a helicopter,
Not to mention a great bunker buster.
Non military people tend to think head to head with attacks on Main battle tanks using the likes of the charlie G or RPG27
But not true using the HEAT/HESH rounds on armored support elements is the real Achilles heal of an armoured assault especially in a FIBUA area.

absolutely. I would not want to be a crew member for any kind of heavy vehicle in built up areas unless it was something practically impenetrable.

posted on Sep, 10 2014 @ 02:08 AM
link
"In the battle between Armor and Projectile,Projectile always wins".I don`t know where that quote came from but it sums up the problem that armor has.

posted on Sep, 10 2014 @ 03:21 AM
link
Not always. There was a Charlie 2 hit by 14 RPG and a Milan missile on Op Telic and all it did was damage the sights. There was another that took roughly 70 direct RPG hits and got away fine. Suppose you are right though if it's big enough and fast enough it's getting through no matter what is in the way.

originally posted by: HardCorps
I want one... No. make it two... So I can fight Rambo style with one in each hand!!!

It has a nasty backblast and needs a crew of 2 to fire. It cannot be fired from within buildings, in front of a wall.

posted on Sep, 12 2014 @ 08:39 AM
link
a reply to: sg1642
I remember that " Old and Bold " scenario being told to me by an old tanker friend,
There was a fuel/ammo resupply convoy that got caught in a waddie and was in dire trouble till a challenger two was dispatched to help drive off the Iraqi army ambush.

The crew fought the enemy off but their tank became separated and was ambushed by a hunter tank squad, lost both their tracks and main engine, They still had there auxiliary engine so where able to survive a very sustained attack from Iraqi forces.
Now if it had been an Abram MBT i doubt it would have been able to defend its self because off the design off the main power supply, basically a jet turbine system which can not supply auxiliary power when damaged.

Im sure there will be some that would disagree but its a major flaw in the design off the Abram system (Mk1).